It’s Women’s History Month in Australia (and in the US) and I meant to write a delightful piece about something entirely different, but on Wednesday I took my regular students to see an exhibition on British women’s suffrage. It struck me that, although most women were given the vote in Australia at Federation, women’s lives from that generation that saw all the Suffrage debates – from the moment Australian women got the vote to 1920s when US women could vote and learned how to use it, show that it was only a partial victory.

I could focus on politics for this, or talk about income levels and glass ceilings, but today I’m thinking of grandmothers. Not all grandmothers. Women who took care of spouse, children and households born from the 1890s to the 1910s. Those who were part of these big changes the way I was part of another wave of big changes in the 1960 – they were the first generation expected to blossom. We often think of this period as changing women’s lives. And it did, in many countries in some very important ways. The truth of the everyday wasn’t as glamorous for many, many women.

I often talk about two of my great-aunts, who ran their own business. They were the ultimate glamorous working women in Melbourne, in some ways, for they ran an exclusive shop on an exclusive street and were regularly consulted by the papers about incoming fashion. They were fashionable … and they were hit by the Great Depression. A wonderful roller-coaster set of lives that doesn’t make most books. I put this picture of the arcade their shop was in up on Redbubble the other day, to celebrate them. They can't get books, but they can have t-shirts and journals. 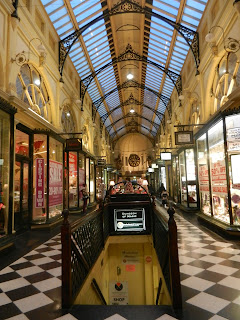 Also, an influential pair of sisters, during their lives. They were forgotten by the press immediately after, however, for women are not expected to leave lasting legacies. A generation later their niece ran a successful business when life proved less than supportive. That was what she did during the day. Her spare time was devoted to arts and crafts, at which she had a real talent. She had to (she told me) work all this out for herself: the family career tradition was not quite that. It was more that women didn’t get much support when things went wrong. My great-aunts’ problem was that they had never married and my aunt’s that she was a widow. All three of them were born during this critical moment in women’s history. All three of them voted.

Popular literature during this period often contains the message that women’s lives were not complicated, that women’s main purpose was to support the men in their lives. The reality is that the vast majority of women’s lives in Britain, Australia, the US and other similar countries were reported to look the way popular literature described them, but they were not. My grandmother divorced and was not given any money to support herself that I know of. She took her cooking talent and made sweets for a living.

Three sisters of that family earned their way through life. In my generation we were expected to go to university and then earn our way through life, but decades earlier, few women were given that privilege. They were literate (which has been typical of Australia for a fair while now) but left school when it was legal. Some of the males of that same generation went to university and some did not, but it wasn’t until my mother finished school that university was open to women. And it wasn’t until the 1970s that it became open to anyone bright enough and with a good enough high school result. Women who had the vote weren’t allowed to be equal in all things. Not in public image, not in decorum, not in education, and not in work.

When I talk about this to a live audience, there is always someone who says “Men missed out on stuff, too.” This is true. However, the public narratives gave them more choices. If a teenage boy was very bright and wanted to go to university, he could, for instance. For the women in the family, even though the local universities were accepting women into degrees by the time they were old enough to apply… they weren’t encouraged to apply. In fact, quite the opposite. My mother was the first woman (in an educated family) to get a university degree. That wasn’t until the 1950s.

Simple narratives are wonderful. That women got the vote was great. That –  in Australia – Indigenous women were not equal to other women until much later is forgotten in the triumphal account. The everyday life is where we find out whether that simple, triumphant narrative is accurate.

Private lives tell us so much about what actually happened to women and help explain and refine our understanding of those magnificent narratives. For me it’s the difference between those who decided on the suffragette colours and marched with them, and the smaller realty of most of our lives. The big history is important, but it’s not the whole story.