The Scourge of Smallpox in Early Modern England by Deborah Swift

We are fortunate to live in an age where smallpox has practically been eradicated. In the eras when my novels are set, this disease struck indisciminately, both rich and poor alike. Researching the plague, I have read a lot about smallpox epidemics in my research. Although we often hear of the plague in the 17th century, smallpox killed more people and was just as deadly.

If you caught smallpox you would begin by suffering a high fever, along with vomiting, and severe stomach pains. This would often be followed by delirium and a red rash which started on the arms and legs and then spread to the face. The pox proper - pustules filled with liquid, usually appeared after about six days, beginning on the forehead and wrists and spreading into the mouth and throat.

Unlike chickenpox, smallpox affected the palms of the hands and soles of the feet, which made touching anything unbearably painful. If there was no-one to look after you, you were likely to die of starvation or dehydration. If that weren't bad enough, smallpox brought other complications in its wake - bronchial infections, ear infections, gangrene, and even paralysis. No wonder the disease was so feared.

Smallpox Scars
Probably the most famous smallpox sufferer was Elizabeth I, who covered the resulting pitting with her now trademark white lead. As a queen, her power was such that it did not affect her fortune, but in an age where a woman's trade was her looks, catching smallpox could change lives forever. Those who survived an attack were often severely pockmarked, and to counter this effect, women wore veils, masks or patches (beauty spots) to hide the worst of them.

Scars were a mild discomfort, for death from the disease was common and in the 17th Century John Evelyn records in his diary how his daughter, Mary, suffered and eventually died at the age of 19, causing him 'unspeakable sorrow and Affliction.'

The effect of the virus grew during the 16th century but reached epidemic proportions by the early 17th century. At most risk were those in the capital, where crowded conditions made the spread of the disease easy, and the epidemic of 1694-1695 killed Queen Mary.

'the small-pox is usually in all great towns...at one of them every seventh year and at the other every ninth year...which the physicians cannot master.'

Like many, he believed the disease to be cyclical, and to be caused by infected air. Thomas Sydenham (1624-1689), a physician, noticed that the rich seemed to die more often from smallpox than the poor. His conclusion was that the treatments killed as many as they cured. Though I have to say, his own methods seemed extreme; here is  a patient's description:


“Whilst I lived in Dr Sydenham’s house, I had myself the Small Pox, and fell ill on the Twelfth Day. In the beginning I lost twenty two Ounces of Blood [from bloodletting]. He gave me a Vomit, but I find by Experience Purging much better. I went abroad, by his Direction, till I was blind, and then took to my Bed. I had no Fire allowed in my Room, my Windows were constantly open, my Bed-Clothes were ordered to be laid no higher than my Waste. He made me take twelve Bottles of Small Beer, acidulated with Spirit of Vitriol, every twenty Four hours. I had of this Anomalous Kind [of smallpox] to a very great Degree, yet never lost my Senses one Moment.”

Thomas Dover, The Ancient Physician’s Legacy to His Country

A Old Crypt Causes Fear of Infection
The excavation of the crypt of Spitalfields church in London in 1985 raised the genuine possibility of re-introduction. The bodies - three thousand of them, preserved in lead-lined coffins, were from the 18th and early 19th centuries, and about 10% were known to have died of smallpox. The Victoria & Albert Museum staff used medical precautions when dealing with them, as it is not known how long the organism can survive.

Thread Inoculation
A Norwegian vicar in about 1700 reported that people “bought pox”  to ensure a mild attack. They rubbed a coin on open smallpox sores, then made a thin cut in the skin of healthy children and tied  the coin tightly to the wound; this acted as primitive immunisation.

Lady Mary Wortley Montagu (1689-1762) hit upon the same idea and is credited with introducing variolation or 'ingrafting' to Britain in 1721. Severely pockmarked herself, after surviving the illness from which her brother died, she learnt about variolation in Constantinople, where her husband was the British Ambassador. 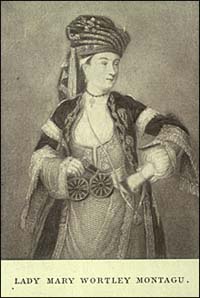 Ingrafting consists of taking a small amount of infectious matter from a sufferer and using a thread, introducing it to a small cut. After that, the wound would be bandaged and a mild case of small pox would ensue. This prevented a more severe infection. Lady Montagu, who lost her eyelashes completely to the disease, had her children inoculated and persuaded the Princess Caroline to do the same, thus earning a Royal seal of approval.

In 1796 the idea was developed further by Edward Jenner, widely credited with being the instigator of immunology. He noticed that milkmaids, who often contracted cowpox, were immune to smallpox.
So he infected James Phipps, the son of his gardener, with cowpox from Sarah Nelmes, a milkmaid who had caught the infection from a cow called Blossom. The boy was then exposed to smallpox and did not contract the disease. Somewhat risky - I don't think I would have been prepared to risk it for my child! But thank goodness he did, for the deadly and disfiguring disease is now a terror of the past.

Coming Soon from Deborah: A Plague on Mr Pepys
Find me on Twitter @swiftstory
Posted by Deborah Swift at 11:15

Very interesting! A historical fiction book would hardly be complete without some mention of disease. Thanks for this post!

I'm curious about how they cared for smallpox sufferers. Did they burn their sheets and clothes, or wash them? What did they eat? They were obviously isolated, so how did they dispose of the waste? I believe it's an air-borne disease, so leaving the windows open was probably the worst thing! We had the problem of a leading character who caught smallpox right before her wedding in a book I was consulting on recently, and no one could find any contemporary documentation.

Fascinating post! Interestingly, scientists are now looking at ways to 'reprogram' smallpox to help fight other diseases. Could it be a case of killer-to-cure?

Thanks for this interesting blog. I'm writing about an 18th century portrait painter and, of course, part of her trade was to camouflage her sitters' pock marks.