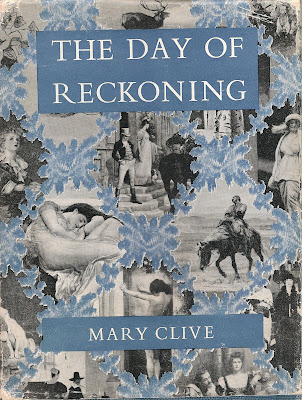 I’ve been reading a book called ‘The Day of Reckoning’, written by Mary Clive, best known for her marvellously entertaining semi-autobiographical romp ‘Christmas with the Savages’ based on childhood memories of her own family Christmasses in various English and Anglo-Irish stately homes in the early years of the last century. (She was a sister of Long Longford). She is so entertaining that I began to seek out others of her books. ‘The Day of Reckoning’ was published in 1964 and is a kind of personal history of the day-to-day surroundings, furniture, pictures and other fashionable items she grew up with as the child of a well-to-do family during the so-called ‘idyllic’ pre-War years. It is sharply-observed and often very funny. Here, for example, Mary’s mother shows her children two paintings (by G F Watts) on the drawing-room wall, both of them 'tall and thin, a shape much favoured by late Victorian academic artists, and they fitted in nicely between the french windows...'

We stared at them. One, she said, was called Love and Death. Well, we could all understand that. We were quite accustomed to stories in which silent veiled white strangers were confronted by another apparition who claimed that his or her name was Love. The only interesting point was which of them was going to get the best of it.

Then there was the other painting. ‘One man standing by himself and no clues at all.’

‘I see a venerable character,’ began my sister, ‘perhaps even the Venerable Bede.’
‘Nonsense,' said my mother, ‘it’s quite a young man. Now what is he wearing?’
‘Sort of a dressing gown.’
‘Oh come! It’s rather a fine robe with a fur collar. And what is he doing?’
‘Looking for something on the ground.’
‘No, no, he’s going away sorrowing. He’s the young man with great possessions – in the Bible – you must remember.’
Yes, I remembered, and I wondered how my mother could, how she could, bear to have him in her drawing room. The passage in which he occurs had always seemed to me to be the most uncomfortable in the New Testament...

‘You need pictures to keep down wallpaper,’ was one of Mary’s mother’s axioms, and one of the pictures which hung in her bedroom (over the bed) was a photographic reproduction of ‘The Day of Reckoning’ (1883) by Samuel Edward Waller.  Here it is:

Pictures that told stories were almost ubiquitous at the time, so:

‘What does it mean?’ we asked.
‘Can’t you guess?’ asked my mother. We looked again. Horses, dogs, grooms. A familiar sort of scene but nothing much happening.
‘What about the auctioneer?’ said my mother. We then perceived the auctioneer and wondered how he came to be allowed so close to the house. My mother wondered how she came to have such stupid children. To her, the whole story was crystal clear. The young man had ruined himself gambling, and was now being sold up.

So Mary Clive takes the title of this painting as the title of her book: for a Day of Reckoning was indeed to come and sweep away the kind of world her parents had inhabited. The First World War is something she mentions explicitly only in the last few pages of the book, though the knowledge of what is to come is implicit throughout. But this is a cheery, wry, funny book, and one of the chapters I’d like to share with you continues the theme of pictures that tell stories, pictures which – like ‘The Day of Reckoning’ – solicit or even tease the viewer to find a narrative interpretation. They were known as ‘Problem Pictures’.

‘Every summer at the Royal Academy’, said my governess, ‘there was a problem picture. Crowds stood in front of it, speculating on the meaning. It was very amusing.’ So my sister and I longed to go to the Royal Academy as we were sure we would guess the answer immediately.

Some of the problems were not for the jeune fille, said my governess. There was often a man and a woman and a title like Disillusioned which might mean all sorts of things. The best problem paintings were painted by the Hon. John Collier, and his most famous one, The Cheat, showed four people sitting around a card table wearing expressions of indignation and dismay, and it is so wonderfully painted that you simply cannot tell which is the guilty person…

I hadn’t heard of John Collier before this, so I looked him up, and happily many of his paintings can be found online. He was born in 1850 into a well-to-do Quaker family; his father and grandfather were both Members of Parliament, and in 1879 he married Marion Huxley, daughter of the famous Thomas Henry Huxley, ‘Darwin’s bulldog’. They were at art school together: here is his portrait of her... 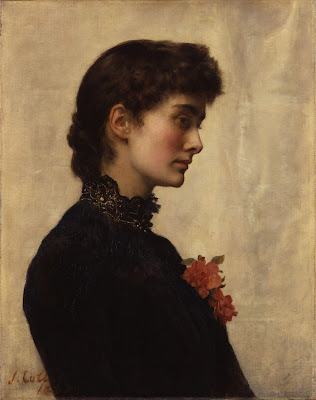 And here is her portrait of him. 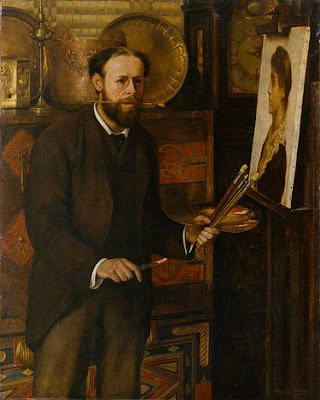 Marion  died tragically in 1887 following severe post-natal depression, and two years later Collier married her sister Ethel. Marriage to a deceased wife’s sister was not then legal in Britain, so as Mary Clive puts it, ‘They went to Norway, where the laws were Scandinavian. Naturally, this was considered a rather quaint way to go on and even after 1907 when the Deceased Wife’s Sister Act was passed, people like his brother’s wife, Lady Monkwell, continued to cut him. Collier himself, crusader for various liberal causes, must have thought this ridiculous.’

Many of Collier's paintings present women in action, or in striking attitudes of rebellion. Take for example 'The Prodigal Daughter' (1903). Mary Clive comments that the young woman is portrayed as 'entirely unrepentant', and suggests that although 'her old mother is prepared to welcome her with open arms, her father is made of sterner stuff.' Hmmm... Maybe... 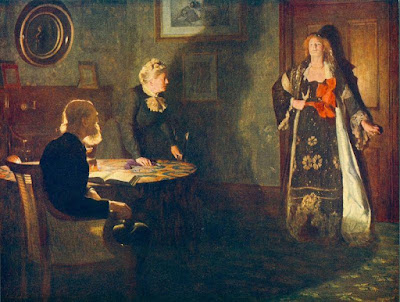 Or how about his two depictions of Clytemnestra? Not problem pictures as such, perhaps, but problematic in subject matter. In the earliest, painted in 1882, Clytemnestra dramatically thrusts back the curtains of the bath-house. She leans on a double axe, her face taut with deadly purpose, her robes stained with Agamemnon's blood. 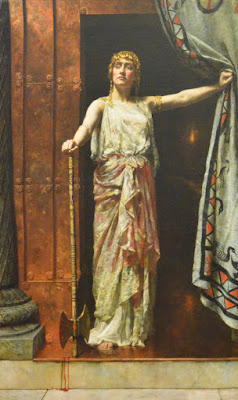 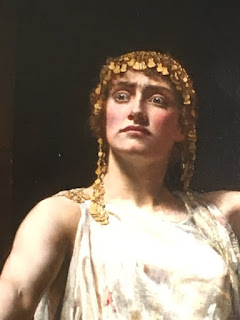 Collier revisited the same subject a few years later, in 1914, by which time the Minoan civilization of Knossos had been excavated by Arthur Evans, and its pre-Homeric frescoes provided a very different picture of life and dress in the Mediterranean Bronze Age. Instead of wearing a modest classical Greek peplos, Collier's new Clytemnestra approaches Agamemnon's bath wearing a Minoan-style skirt and gold belt, her torso bare - the sword in her hand as yet unbloodied, the act of murder yet to be accomplished. 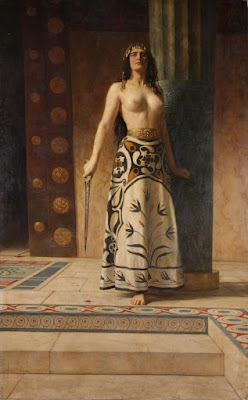 According to Mary Clive, this second painting 'became news in 1922 when Blackpool Town Council considered buying it, and the London press, ever ready to make merry at the expense of the Provinces, evolved the story that it was turned down not because of its size [238 x 147.8 cm] but because the City fathers considered it "wicked and nauseous".'

Well, in that case Blackpool's loss became Worcester's gain. Here are some more of  Collier's 'problem pictures': and you can tease away at them and decide for yourselves what is going on. This one, from 1898, is called simply 'Trouble'. 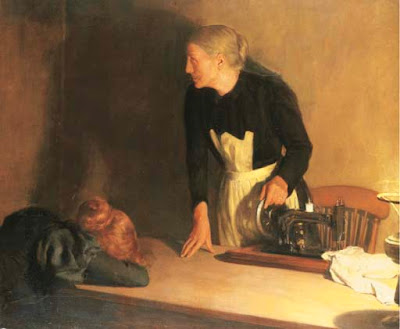 And this, painted in 1895, is 'The Laboratory.' Just what is the rich young lady taking from the alchemist with such a regal air? A love-philtre? Poison? And what is that in her other hand? A mask? A mirror? 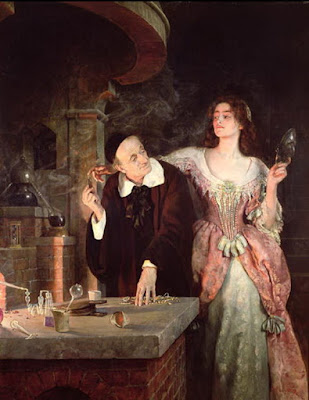 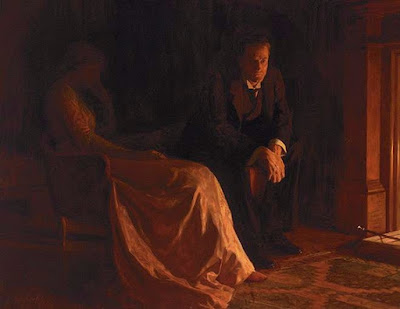 Collier must have been a real professional. His output was enormous, of high technical quality, and along with the 'problem pictures' (which he must have known would always bring the crowds) he painted many portraits. I will give Mary Clive the last words.
‘ “A thin bearded man (he) gave the impression of quiet tenacity and a sort of polite ruthlessness, and on occasion he indicated that he considered the public extremely crass. Regarding the celebrated problem pictures, “They are nothing of the kind,” he wrote impatiently. “The only ones that have been so termed merely depict little tragedies of modern life, and I have always endeavoured to make their meaning perfectly plain. If I ever again paint a picture of modern life, which is doubtful, I shall give it a title a yard long, setting forth the life history of the characters, and, if necessary, their names and addresses…”

All the same, who had cheated? And how?’

Collier sounds like quite a character! And I do like the mother who invited her children to take a good look at the paintings to work out the story.

There is a hanging at my mother’s home which I always wondered about and made up stories about as a child. It’s a moonlit night. The setting seems to be India long ago. There are two young men galloping along on horseback, one of them, sharing his saddle with a beautiful young woman, is leaping his horse over a stream, while the other one glances back at a palace. Are the man and woman lovers eloping? Is it a kidnap? Who is the second young man? A friend? A guard? Is it perhaps during the 19th century? It looks older, very Arabian Nights, but one of them carries a long gun... As a child, I was always fascinated by the horses, of course(little girl, horse lover, right?) There’s something wonderful about making up stories about pictures.

Thank you for posting this.

I have a question regarding this part:

According to Mary Clive, this second painting 'became news in 1922 when Blackpool Town Council considered buying it, and the London press, ever ready to make merry at the expense of the Provinces, evolved the story that it was turned down not because of its size [238 x 147.8 cm] but because the City fathers considered it "wicked and nauseous".'