It was 2007, and I was whizzing along the A64 in North Yorkshire because in the novel that wasn't yet A Secret Alchemy one of my narrators whizzes along it. A small sign suddenly said TOWTON. I stamped on the brake and turned left, and the whole structure of the novel changed.

Modern-day Una Pryor drives the A64 because she's researching another of my narrators, Antony Wydvil, uncle and guardian of the Princes in the Tower. He rode this way to his death in 1483, but I hadn't realised till I got there that the road might take him into his own past: to 1461 and the Battle of Towton. It's the bloodiest battle ever fought on English soil, and it was Antony's first. Towton battlefield, I found, is high and open and eerily silent, and you can see how, when the two armies wheeled in the blinding snow on Palm Sunday, soldiers tumbled down the slope to drown in Cock Beck. It was said the water ran red for days. 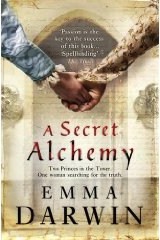 So that became the shape of Antony's story: one, long, midsummer day's ride from the bleak, private Plantagenet stronghold of Sheriff Hutton, to the squat yellow muscle of the great administrative centre of Pontefract - and from it I strung his whole life. For him it was a pilgrimage, and Elysabeth his sister also tells her story as a series of stops on her life's journey through this glamorous and violent world. She was left a widow with two small sons when her husband was killed fighting for Henry VI. Edward Plantagenet's victory at Towton a couple of months later made him Edward IV, and caused the Wydvils to change their allegiance. What was it like for them, I'd wondered? The historical record is largely made by the Wydvil's enemies, but I wanted to understand them from the inside.

And then I realised that Una, too, makes a pilgrimage almost the length of England; she's looking for the Wydvils, but she also re-finds her own past, and thus her future. Una's pilgrimage through the book, therefore, became mine. And what I found was how late medieval politics is all about roads. Battles happen on the roads which lead from the great lords' powerbases to London and Westminster:  Barnet, Northampton, Tewkesbury and two at St Albans. If it's not battles, it's still about land. Elysabeth's first husband, Sir John Grey, lived at Groby, just up the A5 (Watling Street) from her childhood home at Grafton, and their wedding consolidated their fathers' local power. I've stood in the church at Ratby where they were married; I've seen his childhood home too; I've glimpsed the burnt-out shell of the manor house where their two sons were probably born. It was from the royal hunting lodge at Stony Stratford that Edward IV rode out secretly to woo the beautiful widow Elysabeth Grey; it was at Stony Stratford twenty years later that his brother Richard of Gloucester took control of their son Edward V, and sent Antony to his death; the stones of Bermondsey Abbey keep turning up as they build smart new flats there.

One of the pivotal events of the novel is the siege of the Tower of London, and I gave Una a house just along the riverbank in Narrow St. It's actually an agreeable pub, half-hanging above the dark grey waters of the Thames; I had lunch there. And several scenes are set at Eltham Palace, the beautiful little late-medieval pleasure palace now in South London, then handy for the royal dockyard - and the brothels - at Deptford. And necessity is sometimes the mother of inspiration. For dull reasons of chronology I had to set Una's narrative a few years back, but in 1990 Eltham - the 14th century palace and the Art Deco country house it became - was being restored by English Heritage. So Una goes to see what's being done to make it come alive, and the whole of A Secret Alchemy came to be about how restoring a historic house is like writing a historical novel.

How, in telling stories, can we - and can't we - bring the past alive? When you're restoring a house, says Mark in the novel, it's not enough just to tidy up what's left of the original. If you want to evoke the lives that once lived there, then leaving out everything which would have been there, but is no longer visible, would be another kind of lie. "You have to make the story whole." And one way I did so was to show how the separate strands are wound together into that whole: to make explicit what the whole novel is doing implicitly. Mark and Una are being shown round the restoration at Eltham:


The craftsmen and builders have gone for the day. ‘I was involved with excavating Bermondsey Abbey in the sixties,’ I say, and Charlie’s eyes light up. I tell him what I remember about the dig while we walk along a wide, curving, sleek-panelled corridor that wouldn’t look out of place in a grand ocean liner, and into the huge quiet of the Great Hall.

The space seems to hum against me. The windows are high in the walls and so big their stone mullions shimmer against the light, and a great hammerbeam roof of age-darkened oak lowers above and between them. Charlie says proudly it’s the original. He’s talking about the firebomb that came through it in 1940: the burn-marks are there, on the stones of the floor, and must be kept, for they’re part of the history too. Mark’s asking him about the masons’ marks and carpenters’ joints, and what the principle of restoration is.

'Well, in art restoration the rule is that the new work must be visible at two feet, and invisible at four,’ says Charlie. ‘That way you’re not pretending it’s real, but there’s a sense of realness. Obviously here it’s a bit different. We might darken a new wooden beam so it blends in with the originals, but we wouldn’t falsify. No fake wormholes or smoke-marks. On the other hand, where you have to conjure up from nothing, it works better to do something completely modern, not faux-historical. Clean glass and steel, or whatever: something good in itself. The Courtaulds’ architect in the twenties mostly knew that.’

I’m not thinking about the twenties, I’m thinking that here Elizabeth and Anthony danced, here ambassadors were given audience and wedding feasts were held, nobles drank and fenced, and the children ran riot on wet days, perhaps, with the dogs barking around them. Did they come here when Edward’s sister Margaret of York had been safely married off to the Duke of Burgundy? What did it smell like, then? Velvets and flower-water? Sweet herbs and banquets? Latrines and fly-blown meat? Sweat and fear? What did it sound like? The court was famous across Europe for its music, but how did they hear it? Did it creep into Elizabeth’s ears as it does mine, and make her want to laugh, and cry, and love? She wasn’t in love with either of her husbands, it’s a fair guess. But there’s nothing – not a single whisper in a court full of her enemies – that murmurs of anyone else. Did she ever love someone so much that she hurt for joy, so much that it seemed beyond reason? Did she regret that she never had?

There’s ancient dust gritty under my feet and outside a last late chisel rings like a bell on the stone. If I strain my ears enough, perhaps I might hear them. If I could only peer hard enough through this time-thickened, time-thinned air, they might come before my eyes.

Email ThisBlogThis!Share to TwitterShare to FacebookShare to Pinterest
Labels: 15th century, 20th century, A Secret Alchemy, Emma Darwin, Princes in the Tower, Wars of the Roses

Great blog, Emma! And I love the excerpt from your book. P.S. Isn't it fun being an historical author?

Isn't it great when you come across something - a place, or a fact you didn't know before - that suddenly shows you a different way to go? It makes you feel part of a pattern...

I'm beginning to think this History Girls blog wasn't such a good idea. Every day I find myself introduced to more books I want to read, more places I want to go and more research I'd love to do.

When am I ever going to find time to write any more books myself?

Thanks, Emma, for giving me more ideas. See if you can slip in a bit more time as well.

Beautifully written post, Emma. I like your analogy between restoring a house and creating historical fiction. Of course, in a sense, it is a cheat - but such a satisfying one. My grandfather's side all came from Sherrif Hutton. I must go up and visit some time with your book in my pocket.

Oh, this is what I so like about the UK. You can find this sort of thing and history can come so marvellously alive! Thanks.

Wonderful Emma but not writing more now as I'm testing comments one last time. They're still not working for me so this is it!

But it has worked, Dianne!

So that worked! But i won't hold my breath as its worked before and then not. Emma your extract is wonderful. I'm finding the History blogs so enthralling and my shelves will be groaning.

Caroline, yes, that's such a lot of the fun. Even when I think I'm writing something set contemporary, it always seems to end up being about history. Tend to think I write novels about history, rather than historical novels, for that reason!

Sue, yes, that It Must Be Meant feeling - something you didn't even know you were looking for slots in so beautifully, and enriches everything. But you can't make those things happen, I think, you just have to go plodding on with what you think you're looking for, and keep your ears/eyes/hands open for the surprises.

Book Maven, would it be wonderful if every good idea came with a couple of days attached?

Linda - I'd forgotten you come from up there. But yes, it's all smoke and mirrors really, isn't it. Which is what that extract is saying, I suppose. Or rather, that the smoke is what both divides us, and joins us, to the past...

Cat, yes, I do enjoy that. I live in a very dull, late-Victorian suburb of South East London. But the hill behind my house was a Viking fort.

Dianne - it works! IT works for me too! And glad you approve of the extract.

Ah but even "dull" Victoriana has a certain romance for us colonials!
Victorian era houses are considered "old" here - anything over one hundred years old is considered "old"!