History's sole object is to ruin my sequel by Louisa Young

History is doing my head in.

I'm writing a sequel to my novel My Dear I Wanted to Tell You. That was set between 1908 and 1919; it started in 1917, went back, came forward again and overtook itself. It worked all right.
Why? Because History had given me a beautiful present, which brought with it period, setting, tone, character, plot and theme: a First World War field postcard, preprinted, for a wounded soldier to fill in as applicable. 'My Dear . . . , I want to tell you before any telegram arrives . . that I was admitted to . . . with a slight/serious wound in my . . . '. All I had to do was pick a battle, put my soldier in it, and then fill in the blanks, the untold story on that card. He lied, of course. You would. The story came beautifully, quickly, and easily: love and fear and lying to protect those we love, our great inability to communicate. The hideous, miraculous, disgusting origins of maxillofacial surgery. A slight wound in the stiff upper lip. It wrote itself, as they say. Time, in all senses, was on my side. 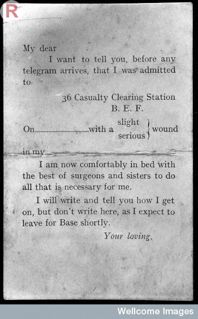 That field postcard was displayed at the Wellcome Foundation in London, opposite a photograph of a soldier whose facial wounds had been put back together by the pioneering facial surgeon Major Harold Gillies. (This is the moment when people say: 'Oh! Yes - the Guinea Pigs!' and I say: 'No, that was Archie McIndoe. This was twenty five years earlier. Though Gillies was his uncle.') My grandmother Kathleen Scott worked with Gillies, in 1917. She was a sculptor, and widow of Scott of the Antarctic; she cast in plaster the faces of the wounded, for the surgeons to measure and practice on. My first book, twenty years ago, was her biography. Researching it, I read about those wounded men in her diary, and uncovered photographs and drawings of them, and I thought: I'll come back for you. If you're feeling strong, take a look at the images at www.gilliesarchives.org.uk. Number 17 of Tonks' pastels is Corporal Riley. I stole his name, his face, his wound, and an anecdote from his nurse's memoirs, and sent him to Passchendaele. My story had found all its legs, and stood strong.
The sequel starts out handicapped by the strength those legs. It's like being son of a famous father. So far I've attempted to start it in 1939, 1938, 1920, 1940, 1943, 1919, 1870, 1900 and (briefly, foolishly) 1964. But no matter where I try to start it, whichever year I go to, my former friend, history, turns up to confuse the issue, swishing in like Leonard Cohen's Waltz, with its very own breath of brandy and death, dragging its tail in the sea. History, lugging the entirety of human experience in the tails of its vast and capacious cape*, declares, between bouts of coughing, 'That won't work, you know'; or, 'That was five years before - why would he suddenly mind about it now?'; or 'You're completely ignoring the Spanish Civil War. Just thought I'd mention it.' History know just what I put in volume one, and that it is written in stone.
My starting point for this sequel was the realisation that there were only twenty years between the end of the first world war and the start of the second. Twenty years - a blink of an eye! But when you've zoomed in and placed yourself and your people in there, twenty years is a very very long time. I long to leap about, five years forward here, eight years back there, willy nilly as I please, making it up. But I can't.
Firstly, I don't want to confuse the reader. I already have nine protagonists. If they're all leaping about in time it'll be a bloody flea circus. I need to cull them, not send them flying in a great chronological leapfrog. (My sentences are also too long, and something of a flea circus themselves, if I don't keep them in line. You may have noticed.)
Secondly, I studied history at university, and I never got over it. I have a terrible attachments to facts. I accept that I have to get the bus routes and the underwear right, but I'm not putting all the bus routes and underwear in. If I'm writing about 1937, well, I'm sorry, history, but Italian Unification will not be getting its own chapter.
Thirdly, and this is the killer, my characters are already snagged in history and in their own pasts. This of course is what I want to write about. But at the same time I feel as if I'm trying to fly with something dragging on my own tail.
History, please, be my friend again. Send me the catalyst, the item, the image, which will make it all hang together. Shake something out for me, from your dusty velvet folds. I'm writing now. Please don't me wait another twenty years.
PS: *Hmm. Cape/Capacious. Connection? A cape as something you keep things in? Ohhh! Keep! Is that related too? As in, what is the capacity of your capacious cape; what are you capable of keeping therein? To Skeat's Concise Etymological Dictionary of the English Language: capacity, capable, capacious are all from the Latin capere, to hold or contain; cape, cope and cap are from old French. Hmm. Keep is not connected; it has a K and is therefore Viking. Cope the verb means to vie with, or to fight with - from the French couper, to cut. (See coupon. Aha! Something you cut out of the paper.) But is that what coping with something is? Vying with it? Fencing? Well no wonder we're all so tired. I went to the doctor and said, 'I'm feeling a bit you know,' and she said, 'Are you not coping?'. I replied, 'Doctor, it's worse than that - I am coping.'
Posted by Zizou Alphonse Corder, PhD at 01:01

I love this post. What a brilliant description of the fizzy delights of research and its capacity, at the same time, to overwhelm. I identify very much with your struggle, Louisa, and you've made me laugh about it too - thank you!

Wonderful, and so very true of historical research.

Post WWI - 1918 flu? Please don't ignore it. I hate that it has so little presence in literature, despite killing more people than WWI. Why did we forget it? One of the great mysteries of the 20th century...

Really enjoyed reading that - and I am reminded of the frustrations in writing any history (even just a supposedly simple family history).

Just to say that I hope History drops something wonderful from its Capacious Cape sooner rather than later. I loved your post and your breathless and funny P.S. almost made me choke on my toast.

Thank you for the kind words. And Stroppyauthor (great name by the way), I DID mention the flu in My Dear I Wanted to Tell You, for just that reason. Also syphilis and suicide, two of the other reasons why soldiers died, which are so seldom mentioned.

Brilliant and exceedingly funny post. Loved it and loved... History please be my friend again. As for the PS...!

Fantastic post, Louisa and I'm sure you will find something very soon. The Cape will shake out a gem, I bet.

Ladies: YOU just shook out a gem. If I give the mother spanish flu, everything can start ten years earlier, which would would be very convenient and fit into what passes for my three-part structure. But can I kill her in early summer 1919, given that the flu peaked in the UK a good few months earlier? I think . . . that I can. THANK YOU ALL

Yay - and now I really want to read 'My Dear, I Wanted to Tell You'.

Spanish flu killed the young and healthy. My grandmother came back from nursing on the Western Front and found all going on as normal at her parents' home. She was rather disgusted, and bought a bicycle off the footman, went up to Oxford to nurse the returning students with the flu. Lovely blog, Louisa. x

As a fledgling writer of historical novels, I'm already finding out how inconvenient history can be. And what fun it is to wrestle with the facts and try to keep everything straight while making a story sound convincing.

My take on your dilemma, as a reader, would be that I'd much prefer the sequel to start soon after the end of the first novel. I'm always very disconcerted when I have to re-acquaint myself with a much older version of a character.

And I have added My Dear I Wanted To Tell You to my TBR list. I love the WWI and between-the-wars periods in fiction, and reading Juliet Nicolson's The Great Silence made me interested in the whole issue of facial reconstruction.