On Wednesday of this week, a new film version of the Great Gatsby opens in the UK, amid much hype, or ballyhoo as people might have expressed it in the 1920s, and much discussion as the whether it is a good film, or a bad film, does it do justice to the book, or doesn't it, before any of us here have had a chance to see it at all. I remember the 1974 Great Gatsby with Robert Redford and Mia Farrow. Lovely to look at - so pretty - and Mia Farrow was a good choice, too.

In the weightier Sundays there have been further discussions about what The Great Gatsby might have to say about Our Times: bankers, corruption, fame and celebrity, gossip, the press, and all that jazz, because The Great Gatsby is one of those books like Catch 22, or 1984, or Brave New World, or Animal Farm, which have become shorthand terms for something or other: state of the world, state of mind, human behaviour, where we've been, where we are heading; books that have become ubiquitous labels used in all sorts of contexts, from journalism to promoting new fiction; books that are frequently invoked without having been read, which as far as modern dystopian fiction is concerned is far too often, much to be regretted and should be banned, but that is probably the subject of another blog. Like the great dystopian fictions, The Great Gatsby is a book that people claim to have read and perhaps they think that they have. David Nixon, the artistic director of Northern Ballet, asked an audience after a performance of Gatsby the ballet, how many had actually read the book. 10%. 10%! And that's an audience who had gone on purpose to see a ballet version, so how would that translate to the general population? And yet people think they know this book.

Anyone who has not read The Great Gatsby should do so immediately because going to see the film is simply not enough. I haven't seen the latest version, but I agree with Gore Vidal that the book doesn't translate well to the screen. For him, it has to do with the voice of Nick Carraway, the narrator. Anyone who wants to know about Voice and how it should be done - this is the one. I think it the great strength of this novel that it has proved so difficult to transfer to the brasher medium of cinema. It is quintessential fiction. Perhaps one of the greatest novels ever written. I say that, even though I have an aversion to listing books in any kind of order: Best of, Top 10/20/100. I don't even like saying which is my favourite. Favourite what? Favourite when? It changes. I'm a Gemini. There are works and authors however, whom I admire. That's a different thing. F. Scott Fitzgerald has few rivals. 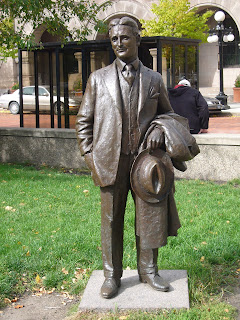 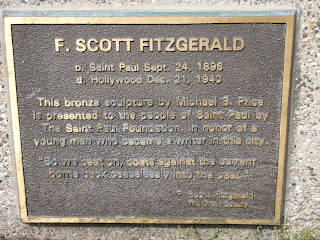 A few years ago, I was in his home town Minneapolis St Paul. I was there for a Book Fair. This plaque was on a patch of green outside my hotel. My hosts were happy to take me on a tour of the bars he drank in, show me the streets and houses where he'd lived. I was paying homage, making a pilgrimage. I can aspire, that's all I can say, like a mole might aspire to climb Everest.  For me, he is the writer's writer. Every sentence, every word is exactly chosen. Each image is diamond bright yet as as fresh as the waters of Long Island Sound. His prose is light but profound. The book is short. Easy to read. You could read it in an afternoon but it will stay with you for a lifetime.

When I was writing Witch Child, I had the following passage pinned up on my notice board.

'As the moon rose higher the inessential houses began to melt away until gradually I became aware of the old island that flowered once for Dutch sailors' eyes - a fresh, green breast of the new world. It's vanished trees, the trees that had made way for Gatsby's house, had once pandered in whispers to the last and greatest of all human dreams; for a transitory enchanted moment man must have held his breath in the presence of this continent, compelled into an aesthetic contemplation he neither understood nor desired, face to face for the last time in history with something commensurate to his capacity to wonder.'

Thank you, Celia - I agree. I will see the film, but love the book and have read it many times. Small Bint, who is not yet 18, claims it's a book to re-read every year, so it doesn't lose its appeal. I'm astonished so few people in that audience had read it, though.

Have chosen this for our next book group selection, so am looking forward to re-reading it. Will also see the film - I like Baz Luhrman a great deal, so I know not to expect a faithful or low-key rendering of the book!

I am sure there are lots of people planning to re-read Gatsby at the moment - I'm just wondering where my own copy is hiding.

Thanks for this post, Celia. Voice does seem hard to translate into a visual medium and without it, a film or tv drama can feel hollow. Looking forward to seeing the film all the same.

Thanks for the responses, guys. I'm pleased to know I'm not alone in my admiration. I, too, will be going to see the film but am afraid that Robert Redford and Mia Farrow will always be my film Gatsby and Daisy. As for the book- that is a wholly different matter.

Thanks, Celia. Must re-read! I don't want to see the movie, anyway.