Lambs to the Slaughter – Michelle Lovric 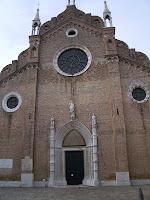 My favourite piece of physical research for my new novel, The Fate in the Box, took place here, at the church of Santa Maria Gloriosa dei Frari in Venice. Locals refer to it simply as the ‘Frari’.
This is the brick-built Gothic church where the gruesome ‘Lambing’ ceremony happens in my book. Poor Venetian children are forced to walk to the top of the tower and wind the handle of the Fate in the Box, a sinister toy like a Jack in the Box. There are two possibilities when the tune stops tinkling and the lid springs open. A lovely Madonna-like face will mean that the child can skip back down to his or her family. But if a skull bursts out of the box, then the child is doomed to instant death.

Of course the real church, one of the biggest and most beautiful in Venice, has never been the site of anything so barbaric.

The Frari is a church of the Franciscans, who were given the land to construct it in 1250. Building took place in several stages and over several centuries. Its walls are vivid with works by Titian, Giovanni Bellini, Vivarini and other Venetian masters. There is also a magnificent collection of reliquaries containing the bones and hairs of various saints all jumbled up in a vast cupboard with glass doors. There’s a provisional look to these dusty shelves, as if someone plans to sort the collection out into arms, legs, fingers and patellas one day soon.

I’ve always been attracted to ancient relics (yes, the obvious comments apply, sigh) but it was in fact a stone relief that first gave me the idea for The Fate in the Box: a larger-than-life relief of a lamb in the Corner Chapel off the Frari’s left transept. This lamb wears a smile. His undocked tail is as bushy as a fox’s. He bears a tall cross. He marches proudly in a ring of rope held by two angels. He looks as if he might easily step out of it and take a little trot around the nave. I began to think about the idea of lambs being led to the slaughter, about the meekness of lambs and the helplessness of children … scribbled down a sketch of the Lamb in my notebook, and that was the start of this book and a year of many visits to the Frari as a writer rather than a relic-tourist.

As soon as I had my idea of sacrifice, I started looking for a spectacular way of performing it. At the Frari, I didn't have far to look.

On the left of the nave, you see the three steps descending to small door that gives access to the ramp of the square bell-tower, which was started in 1361 by the Venetian architect Jacopo Celega and completed in 1396 by his son Pier Paolo. (Outside, a stone plaque at the base explains these facts). Funds were raised by the Bishop of Trebizond, and the Viaro family. (I wonder if this was a way for the Viaro clan to ‘clean’ their family name, as they were implicated in the murderous Bajamonte Tiepolo conspiracy of 1310 that lies behind the events of my first two children’s novels, The Undrowned Child and The Mourning Emporium.)

At 70 metres, only the bell-tower of San Marco is taller than the Frari’s, which is built of terracotta with horizontal stripes of white stone to mark of the three orders. White stone is also used for the arches of the belfry. A bolt of lightning struck the tower in 1490, which resulted in a partial reconstruction of the upper part. Once a lead pyramid (like San Marco’s tower), it is now a polygonal tambour. The Frari’s was one of the four towers in Venice whose bells announced meetings of the Grand Council. (The others were San Marco, San Geremia, and San Francesco della Vigna.)

The Frari’s bell-tower is not open to the public. 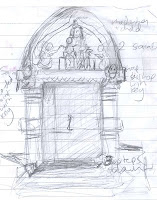 I lurked outside several times, making this drawing of the door to the tower, but never found it ajar. I had plenty of time to wonder if the clerical gentleman pictured on the right of the relief might be Bishop of Trebizond who had contributed to the cost.

But eventually, because of the kindness of Father Apollonio Tottoli, I was able to enter that low door and enter the shaft of the tower, discovering its unusual and fascinating construction for myself on one of those perfect Venetian days when everything seems to conspire to make a writer produce a good story, whether she had it inside her or not when she woke up that morning. I blogged about it  here – somewhat breathlessly - at the time.


In that blog, I teased, promising to reveal later what was inside the forbidden tower. Now that The Fate is published, I can tell you, as the book does, that Frari’s stern campanile hides a rather lovely secret – it is, in fact, a double tower. 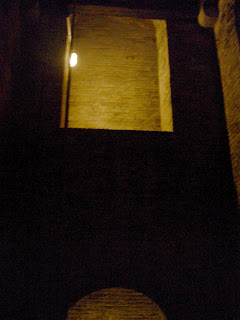 The inner tower has arched windows three times the height of a man. 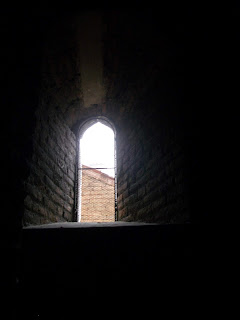 The outer tower has tiny arched windows, which are, of course visible from the outside. A pale light inches in through the deep niches. 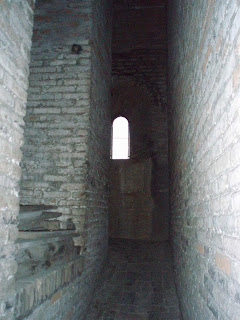 Another surprise: no stairs. Instead, there’s a brick-tiled ramp –designed for wheeling construction materials to the top. The ramp winds up between inner and outer towers. 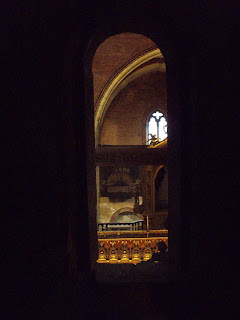 With each new circuit of the four walls, you’re presented with a different view – at first the back of a canvas hung on the left nave wall, then the inside of the church glowing through a little window. One strange sight is the plain black box high up to the right of the nave . It’s the tomb of Abbot Luigi delle Torre who was murdered in 1549 by Tristano da Savorgnan. There is a false story that the coffin contains the body of Carmagnola, who died a century earlier. The painting behind shows two angels who are opening the curtains of the baldacchino, paying respect to the remains below. 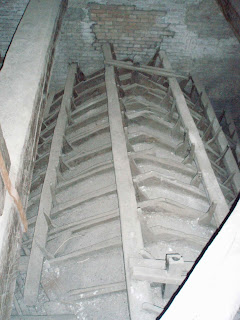 Eventually you find yourself in the roof of the church ... then above it ... The city starts to unfold beneath you 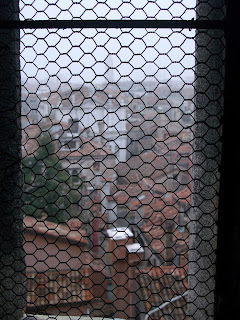 Finally you reach the bells 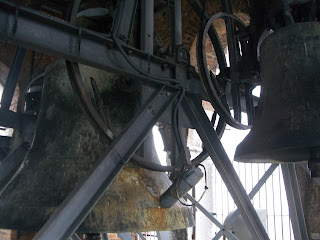 and the full view of Venice, starting with cloisters below 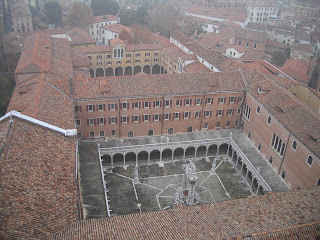 Spreading out to a panorama of rooftops 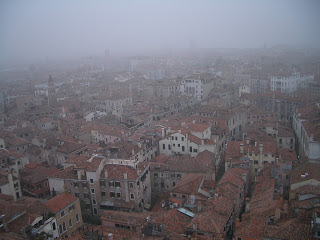 Reaching out to the lagoon.

My heroine Amneris, as you might guess, leaves the Frari tower’s top rather more quickly than she arrives there. And in fact, the tower made such an impression on me that I chose it for the penultimate scene of my villain, Fogfinger, who is pursued up its dark ramp with two angry Sea-Saurs literally nipping at his heels.

Climbing that tower was one of my favourite pieces of research in Venice. However, there is an easier way to get to the top and enjoy that three hundred and sixty degree view. The cult video game, Assassin’s Creed, offers a climb up the OUTSIDE of the Frari bell-tower. I’ve never played the game, but I have enjoyed looking at the clever pastiches of a mediaeval Venice. The artwork is amazingly detailed, including many real features. There’s a fascinating video of a protagonist scaling the bell-tower on Youtube here . Fast forward to the last scenes, where the view is wondrous, as in life.
Michelle Lovric’s website
New pages on The Fate in the Box are here

PS Good news on the Venetian Bookshop campaign. It seems that the Goldoni bookshop has been bought by a new patron and saved from closure.

Email ThisBlogThis!Share to TwitterShare to FacebookShare to Pinterest
Labels: Michelle Lovric, sacrifice, The Fate in the Box, the Frari, Venice

Wonderful photos - and good news about the bookshop!

What a wonderful place to do your research and I love the lambing idea with the pop-up skull. What a brilliantly chilling idea. I just have to read your novel now. But I was equally fasinated that it was triggered by such a seeming innocent image. Amazing what transformations take place in the dark recesses of an author's mind, isn't it?

Your posts just seem to deliver SO MUCH! Information, interest and lovely gruesome detail. LOVE IT! I am going to look at the you tube link NOW! Fantastic...

Congratulations, and excellent news about the bookshop. And doesn't Frari proudly display an unexploded bomb from World War II, because God wouldn't possibly let it explode now and destroy the place?

Thank you all. I don't know about that bomb, Anne. It would have made all my visits there more ... edgy! I know about the Austrian cannon ball still embedded a wall of the church of San Salvador from the 1848/9 siege, and the pattern of them on the facade of a hotel near la Fenice ...

So glad to hear about the bookshop - and I can't wait to read the book.