THE ALIENOR VASE: A wedding present with a history by Elizabeth Chadwick 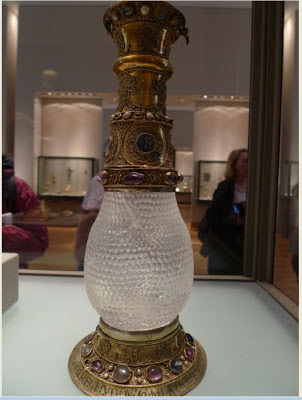 On the occasion of their wedding in July 1137, the future Louis VII of France, approximately seventeen years old, bestowed upon Alienor of Aquitaine his bride of thirteen, an array of wedding gifts so magnificent that the chroniclers of the time, rather than list individual items, just described them as treasures that it would have taken the tongue of Cicero to describe.

Alienor may have reciprocated in largesse, but we don't know because the chroniclers do not tell us. However, we do know she gave him one gift because it's still with us today, and carries its history  by way of an inscription round the ornately decorated base. It is one of the few surviving artefacts remaining with a direct connection to Alienor the woman, the others being a stained glass window in the Cathedral of St. Pierre in Poiters, and her tomb effigy, in which she had a say when it came to the design (and will probably be the subject of a blog post another time).

When Alienor presented the vase to Louis, (called here a vase for convenience's sake, we do not know what its original function was)  the jewel-encrusted mountings at the top and base did not exist. It was a pear-shaped piece of rock crystal worked in a honeycomb design containing 22 rows of small, hollowed-out hexagons.  That was it.  No gold, no embellishment. Alienor had inherited the object  from her grandfather, the notorious Duke William IX of Aquitaine, a crusader, soldier, and composer of sometimes beautiful but frequently bawdy verse.

Carved rock crystal containers have existed from antiquity, the Eastern Mediterranean appearing to be their source of origin at the outset.  The craft of rock crystal carving flourished throughout the Middle East and was a known technique in the Roman Empire. However, the Alienor vase is the only item known to have been worked in this particular honeycomb design in rock crystal.  Others exist but their medium is glass and the Alienor piece is utterly unique. 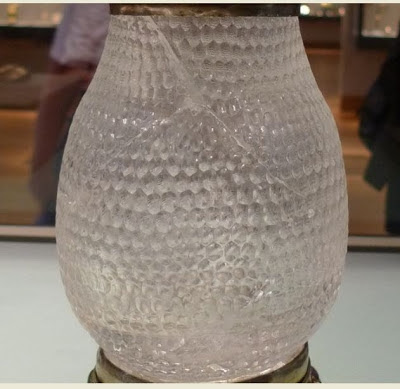 The Medieval world believed that rock crystal was fossilized ice and valued the material greatly. There are references to rock crystal drinking cups in love poetry composed in Moorish Spain, so perhaps the vase was originally one of these, or due to its great value, may have been a display piece.  Indeed, it is likely that the object came from Moorish Spain as a gift to Alienor's grandfather,  the aforementioned William IX of Aquitaine from the Emir Imad-al-dawla of Sarragossa, and would have entered his possession around 1120 during the time he was on battle campaign in Spain.

Experts are unsure of the dating of the vase - dates between the 6th and 9th centuries have been mooted, but  it was already an antique when it came into the possession of the dukes of Aquitaine.  It was obviously a very precious object for Alienor to present it as a fitting gift  to her husband on their wedding day.

On June 11th 1144, Louis gave the vase to Abbot Suger at the dedication of the magnificent  church of St. Denis.  Suger was an avid collector of precious stones and objects of artistic merit, and the vase was as fine addition to the collection. He used it as a communion vessel.

Why did Louis give the rock crystal vase to him? Historian Ralph Turner in his biography of Alienor of Aquitaine suggested that it was an offering to St. Denis in the hope that Louis and Eleanor's barren marriage might be blessed with a child. (a daughter, Marie, was born the following year). It might have been that Louis valued Suger as an adviser and spiritual mentor and wanted to please him.  Suger later wrote that Louis had given him the vase as 'a tribute of his great love.' What Alienor thought is not recorded, but we shouldn't put a modern interpretation on this if we speculate on her feelings. Wedding gifts in the Middle Ages were frequently expected to be bestowed in patronage to the Church. There is no need to think as one biographer has suggested, that Alienor was deeply upset that Louis gave the vase to Suger. It is just as likely that it was a mutual offering.

Now in possession of the object, Suger set about putting his stamp on it.  To beautify it perhaps, and make it worthy of his treasury, or perhaps to make sure that it was never going to be given back, he had a base and a neck fashioned for the vase from gilded silver.  On the base he set an inscription in niello, then a layer of filigree set with gemstones and decorated with more filigree work and fleurons.  He had the neck of the vase similarly adorned.  The inscription around the vase reads in translation from the Latin:

As a bride, Eleanor gave this vase to King Louis, Mitadolus to her grandfather, the King to me, and Suger to the saints.' 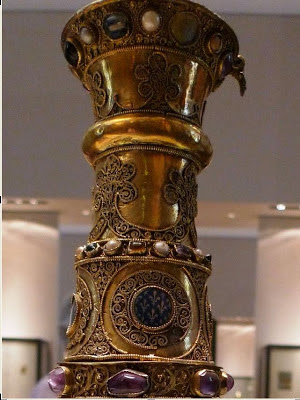 Suger died in January 1151 before Louis and Eleanor divorced.  The vase, now a communion vessel remained in the treasury of St. Denis down the centuries, but following the unsettled period of the French Revolution came to its new home in the Louvre where together with other items from the treasury of St.Denis it can be viewed by visitors to the museum.  I wonder what its original carver would have thought if he could  see it now?

Photographs of the Alienor Vase courtesy of John Phillips.

So much history contained in one item! Fascinating post.I wonder if anything from QE2 and Prince Philip's wedding can compete?

How wonderful! I wish I'd known this when I was writing my story for the Templar History Girls anthology! But I don't think I could have worked it in..marvellous post...

Eleanor was my 25th great grandmother.