NOT AN EVER-ROLLING STREAM AT ALL by Adèle Geras 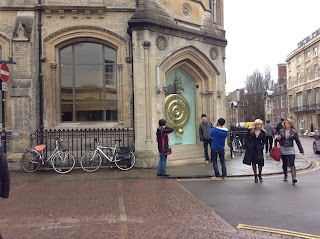 This is the corner of Benet Street and Trumpington Street in Cambridge. This picture shows the scale of the clock set into the wall there. It was named The Chronophage by its inventor, John C. Taylor, and it shows better than anything I can think of the inexorable eating away of every second of our lives. The face of the clock is huge, and under it there's an enormous gold pendulum which swings to and fro in a most hynotic manner. 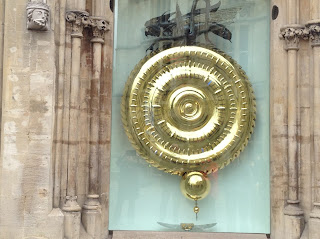 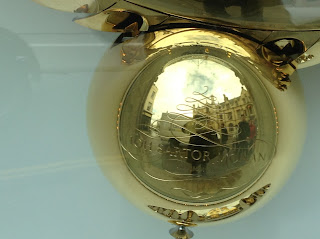 Chronophage means Eater of Time and Taylor definitely wanted his creature, crouched on top of the golden dial, to be a kind of monster. The clock face has slits in it and a LED display lights up to show us the time. It's apparently only accurate once every five minutes but who cares? We have accurate timepieces on our own wrists to get us to our appointments early. This is something else. It's a piece of public art much more than a clock you can refer to...indeed I've never quite worked out how to read the actual time from it. I just stare, whenever I'm there, at the deliciously horrible Chronophage and think what a very good image of the passage of time she is. I say 'she' because the monster is, apparently, known to the students of Corpus Christi as 'Rosalind' though why is not recorded. Perhaps it's in honour of Rosalind Franklin who did so much work with Crick and Watson on the discovery of the Double Helix, DNA and so forth. 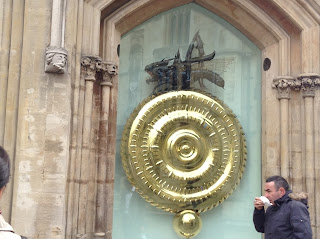 The Corpus Christi clock is a very short stone's throw from the Eagle pub in Benet Street. This is where Crick, Watson and the team came to celebrate after their DNA discoveries. It's also the pub frequented by US airmen during the Second World War and their names are visible, scratched into glass. On a less world-historical note, this is where I came with my then boyfriend in 1962 and at the time I thought The Eagle was very close to heaven. The Chronophage has only been in place since 2008, but all those seconds from the times I've mentioned have disappeared into its maw. Writing: putting things down on paper or on the internet, together with painting, sculpture, and photography, and the study of History, too: these are some of the ways we have of defeating the Chronophage.

I'm not tall enough to get a good close-up of the creature, but this is the best I can offer.

If you put Chronophage into Google you will find all kinds of other sites to give you lots more scientific information and better photos than I can provide. I wanted to write about it here because it exemplifies for me not only a memento mori but also a very nice symbol of endless renewal. That scary locust-like thing devours every second that there is, but look: the seconds go round and round and never stop and there are always more of them to keep Her Chronophaginess well-fed and us hopeful. Every second is followed by another. Forever. That's comforting. And the clock face and dial shine with an almost supernatural lustre.

A wonderful image - especially the uplifting idea that there are always more seconds and that they may be golden. Thanks, Adele.

(Also reminds me how long it is since I last visited Cambridge. Madam Chronophage as a call to action?)

Do come! We can have a girly lunch!

I'll never be able to look at that clock again without thinking about your blog, Adèle! I didn't know about the US airmen's names scratched in the glass. I'll look more closely next time I'm that pub.

When I called my younger daughter Rosalind I was under the impression that it was basically Spanish and meant pretty rose. Only later did I discover that it was Germanic and means horse or dragon rider.
Perhaps that's the reason for the clock's nickname.