A few years ago I was in the Maritime Museum in Fremantle, Western Australia where I made a discovery which intrigued me so much that I knew I'd have to write about it.   There, in the Shipwreck Galleries, I learnt about the many ships which had come to grief up and down the coast of Western Australia and, indeed, about the sailors, soldiers and passengers on these ships who had survived. Europeans who had trodden on Australian soil 150 years or so before Captain Cook sailed into Botany Bay on the other side of the continent.

Captain Cook didn't 'discover' Australia and, to be fair, he never said he did. He always acknowledged that that distinction went to the early Portuguese and Dutch seafarers who sailed to the East Indies in search of valuable spices. At first, the ships sailed round the Cape of Good Hope and then due North, past Madagascar and across the Indian Ocean but then, in 1611, the Dutch discovered a faster route. By sailing further south from the Cape the ships could catch the winds known as the 'roaring forties' which would speed them eastwards across the sea until they had to turn North again and sail parallel with the coast of the 'Southland' (Western Australia) and thence on to Java.  This route shortened the voyage by several weeks but, with no certain way of calculating longitude, it was easy to misjudge the turning point, and if a skipper got it wrong, then treacherous reefs and rocks lay in wait. 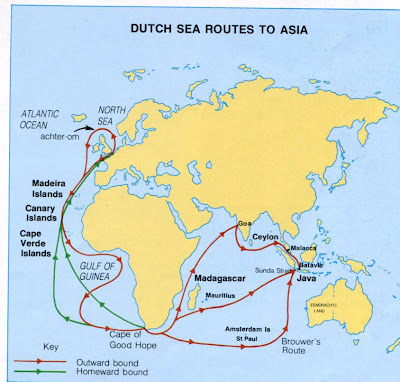 There are so many shipwreck stories but the ill fated voyage of the Batavia was the one that gripped my imagination, not least because it is so well documented in the meticulous diaries of the ship's Commander.

On October 28th 1628, the Dutch East India Company's retourship, Batavia, sailed from Texel on her maiden voyage to Batavia (present day Jakarta) in Java. The ship was laden with a priceless cargo including jewels, silver coins and objets d'art to be traded for highly prized spices.

WHO WAS ON BOARD?
A mixture of passengers. The rich passengers were reasonably comfortable but the poorer passengers had a miserable time. These were desperate folk, many of them destitute, who were in search of a better life in the colonies; they would be subject to deprivation on board and almost certainly to disease when they reached Jakata (Batavia) if they had not succumbed before then. Then there were the sailors, other crew members and soldiers; the soldiers, many of them French mercenaries, were there to protect the ship and the man the garrison at Batavia when they arrived. They would all have been a pretty tough lot. 17th century sea voyages were not for the faint hearted. 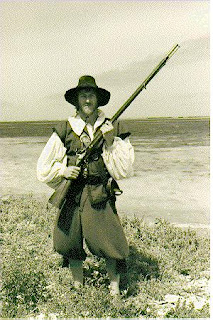 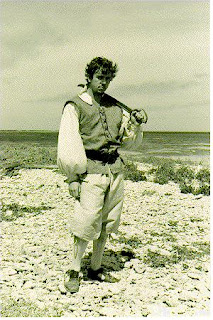 There were also some employees of the VOC (The Dutch East India Company). Commander Pelseart was in command of the ship and Jeronimus Corneliez, another company employee, was second in command. Pelseart was a conscientious company employee but he was not in good health. Neither of these company men knew how to sail a ship and the responsibility for this lay with the Captain, Ariaen  Jacobsz.

Jacobsz had sailed with Pelsaert on a previous voyage and despised him, so the relationship between Captain and Commander was tense. It was not improved when Jacobsz went on a violent drinking spree when the ship docked at Cape Town and Pelsaert rebuked him publicly.

The second-in-command, Under Merchant Jeronimus Corneliez, was a new recruit to the Company. He had joined as a last resort, to avoid being arrested at home in Holland. His career as an apothecary was ruined and his creditors had uncovered his association with an heretical sect which believed that sin did not exist.  This goes some way to explain his chilling detachment and lack of self blame during subsequent events. He was manipulative, persuasive and charismatic.

HATCHING A PLOT
The Captain, Jacobsz, and the Under Merchant, Corneliez, formed a dangerous alliance and they began to plan a mutiny. When the ship left the Cape, the Captain steered a course that ensured that they lost sight of the other members of the fleet, isolating the Batavia. They intended to seize the ship and her valuable cargo, kill the Commander and those loyal to him and then live as pirates. They gathered about them some hot-headed cadets and discontented sailors and directed them to attack the Commander's friend, a high born young woman, Lucretia van der Meylen, who was on her way to join her husband in Batavia. Jacobsz and Corneliez were sure that the Commander would react violently to this act - and his retaliation would be the signal for the mutiny to begin.

In the event, Pelsaert did not lash out as expected, remaining passive and reasonable. Lucretia could only identify one of her attackers and he was imprisoned on board to await trial on the mainland.

So, the lid was on the mutiny, but only just - when Batavia ran aground on Morning Reef off the Houtman Abrolhos Islands near present day Geraldton, on 4th June 1629. 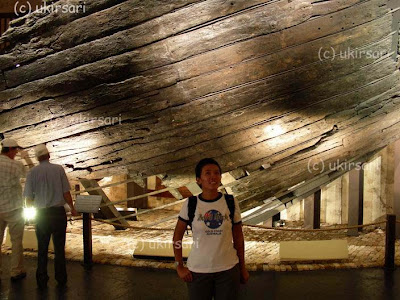 The hull of Batavia in The Shipwreck Museum, Fremantle, Western Australia 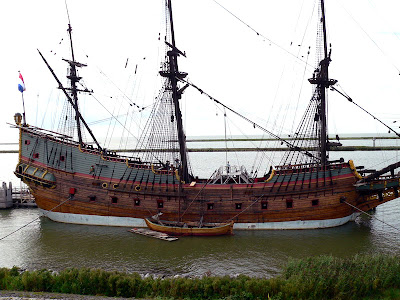 A Replica of Batavia
SHIPWRECK
There are various theories about who was to blame for the shipwreck but ultimately the Captain was responsible. Navigation at that time was hazardous, the coast of 'The Southland' had been sketchily charted and it would be another 140 years before a satisfactory method of measuring longitude was perfected.

ON THE ISLANDS
The islands lying to the East of Morning Reef were flat, coral islands with little vegetation and no water. Initially, the passengers and some soldiers and sailors were ferried to a nearby island by the ship's boats. But there were still soldiers and sailors on board the stricken Batavia when the Commander, with the Captain and some 40 officers and sailors, took the ship's boats to search for a more hospitable landing place, but finding none then set off on the hazardous journey (some 2,000 miles) back to Batavia to get help, leaving the survivors to their fate. The Under Merchant, Corneliez, was the last to leave the sinking ship and make it to the island and he immediately took charge. He established some sort of order but he had not abandoned his mutinous plans; he and his followers would seize any ship sent to rescue them.

Corneliez and his henchmen set about getting rid of the weak, those loyal to the Commander and those who would be no use to them. He ordered the carpenters to make another boat from driftwood and had a group of people ferried to another waterless island where they were abandoned. He kept the water barrels salvaged from Batavia with him. He also had a group of soldiers taken to a distant island (they called it High Island), assuming that this, too, had no water.

Then followed a reign of terror. Corneliez never killed anyone himself but he let his followers run amok, killing and raping indiscriminately, and ordered them to kill many more (even young children). Anyone who was not with him was against him. After a time he sent his men to check on those on the other nearby island. Most had died and those who had not were too weak to defend themselves and were easily despatched.

However, when he sent a force to High Island, they were repelled. The soldiers on High Island had found water and there were wallabies and birds to eat. They were well organised by the soldier in charge, Wiebbe Hayes and had made crude weapons from barrel hoops and other materials that had been washed ashore. Next time, Corneliez went himself to High Island, pretending to make peace, but the soldiers were not deceived and captured him. 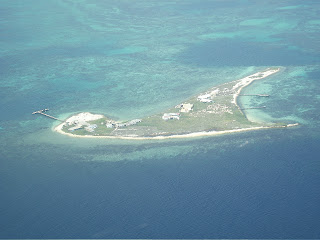 Recently I was lucky enough to fly out to the Abrolhos Islands. This tiny island (now called Beacon Island) was where Corneliez had his headquarters and was the site of many brutal massacres. 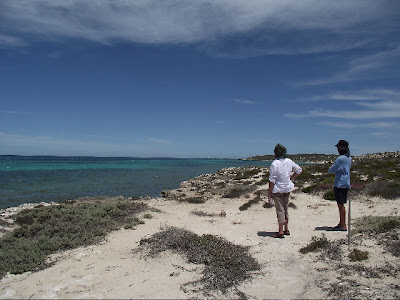 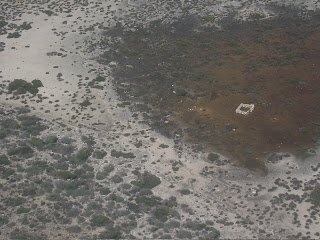 This may not look much but it is the remains of Wiebbe Hayes' fort, taken from the air, and it is the first European building in Australia

RESCUE
Meanwhile, against all the odds, Commander Pelsaert had made it to Batavia. The Captain was left there in jail and another, much smaller, Company ship, the Sardam, well armed and with a new crew, set off the rescue the survivors of the shipwreck.

The Sardam's arrival coincided with another raid on Wiebbe Hayes and his men, led by a young soldier loyal to Corneliez called Wouter Looes. This time they were making more progress and Hayes might have been defeated had not the Sardam been sighted. Hayes's men set off in the boat they had built, in a frantic race to reach the ship before Corneliez's supporters. They succeeded, warning the Commander of what had happened.

Commander Pelsaert wasted no time in trying the mutineers and passing sentence. Many were hanged there and then (including Corneliez) and others were taken back to Batavia to await their fate. He was also meticulous in salvaging all he could from Batavia, including 11 of the 12 chests of silver coins on board.

AND THEN
Pelsaert decided that two of the mutineers should have an unusual punishment. The young soldier, Wouter Looes and the cabin boy, Jan Pelgrom, although they were involved in the mutiny and massacre, were given supplies and a boat and marooned on the mainland when the Sardam left to go back to Batavia.

It is very likely that they survived. They were almost certainly marooned not far from the Murchison River so they would have had fresh water and there would have been animals, fish and birds to eat if they could trap them.

And if they survived, they would have been the first Europeans to settle in Australia.

There is strong evidence for early Dutch settlement. Later explorers to the region reported seeing aborigines with pale skin and fair hair and the huts in the coastal region were reported as being 'different from those in the southern districts, in being built, and very nicely plastered over the outside with clay, and clods of turf.'   So the Nanda people of the Western coastal regions may have absorbed some Dutch building techniques.

But most compelling of all is the recent DNA evidence that some Aboriginals from Western Australian coastal tribes do, indeed, carry Western European blood and that this genetic link predates British settlement in 1892.

I like to think that Jan Pelgrom and Wouter Looes did survive in this vast Southland, so different from the windmills and green fields of their native Holland - and that they were taken in by a local Aboriginal tribe.

The first half of my book, 'The Blue Eyed Aborigine' sticks as far as possible to the historical facts, as set out in Commander Pelsaert's diaries.  However, the second half of the book is pure fiction. No one knows what happened to Jan and Wouter, but I have imagined how their life may have been as they came to live among the Aborigines. And what did the Aborigines make of them? They would never have seen fair skinned men before. Who did they think were and where did they think they had come from?

WHAT NEXT?
Now, of course, I want to unearth more stories about these early shipwrecks and so I'm currently researching the voyage of the Zuytdorp (known, for good reason, as 'the ship of death') which was wrecked on the cliffs north of Kalbarri some time in June 1712.  According to stories passed down through generations of Aboriginal people of the region, a good many people survived the wreck but, again, no one knows what happened to these survivors. There is, however, a tantalising trail - buttons at the site of a large and well established Aboriginal camp, a tobacco box, some clay pipes.... Intriguing stuff!