CROPPING AND CREATING - Teresa Flavin on writing her latest novel 'The Shadow Lantern'............. by Theresa Breslin


This post is a response to request from a follower of the History Girls Blog who asked for insights into writing. It follows on from various conversations I’ve had with the writer and illustrator Teresa Flavin, and to satisfy my own curiosity and fascination with labyrinths and magic lanterns and other sic things. 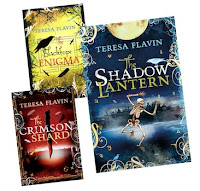 Teresa Flavin is a Glasgow-based children’s author and illustrator. Her illustrated fantasy novel for 9-14 year olds, The Blackhope Enigma, was published in 2010 by Templar Publishing and was long and short-listed for numerous book awards, including the 2011 Scottish Children’s Book Awards. The sequel, The Crimson Shard, was published in 2011 and was also nominated for several awards. The final book in the trilogy, The Shadow Lantern, was published on 1 May.
http://www.templarco.co.uk/fiction/teresa_flavin.html

I knew Teresa first as an illustrator. Originally from the U.S.A. she moved to Scotland a number of years ago and we met at a writers’ conference. The first thing I wanted to know was why, as an established artist and illustrator, was she attracted to writing novels for young people? She replied:

I had been illustrating children’s books for some time so the idea of writing children’s stories was a natural progression. I wanted to illustrate a wider variety of stories and decided to try my hand at creating texts that would excite me artistically. I also knew of editors who were interested in seeing picture book manuscripts from author/illustrators and set out to write stories that I could present with a dummy book and one or two finished sample images. But as I worked on texts of just a few hundred words, I was attracted to many complex ideas that were far more suitable for longer stories. They began as what Tim Bowler calls “a whisper in the head”, then became an insistent buzzing and eventually pulled me away from picture books altogether. I began to discover my inner fourteen-year-old and became caught up in telling the fantastic adventures of two art-enthused teens that bore similarities to myself at that age.

So then of course, the question that many of us are asked…. Why historical? In Teresa’s books this is a thread within the stories. She told me that she doesn’t recall making a conscious choice about this, and went on to say…

I had been reading an intriguing and spiritual book about labyrinths and they were very much on my mind. My first novel, The Blackhope Enigma,was an exploration of this daydream/question: what if a young person could walk around a labyrinth and be so transformed by the experience that he or she is transported someplace else? And what if that place is below the surface of a Renaissance painting? I have been fascinated with such paintings since I was very young and have always wondered what it would be like to enter one.

I reckoned that for such a thing to happen there would have to be enchantment involved, but I was unprepared for what I found when I poked around the history of Renaissance art and magic. I became completely lost in research for some time, endlessly reading about grimoires and memory palaces, Hermeticism and alchemical imagery. Suddenly the idea of hidden worlds below a painting did not seem so far-fetched; plenty of people in sixteenth-century Europe would have believed it possible in a world where one was surrounded by magic and wonders.

One historical path led to another and I was discovering so many amazing things that my stories acquired layers, characters and details I could not have imagined at the start. I was hooked. I wanted to unearth and weave more fantastic elements into new stories, to bring odd bits of history alive in the adventures of young contemporary characters.

Teresa’s books are special in that Art and Language are melded in the narrative and I wondered how she tackled doing this. Her answer tells me as much about her views on painting as it does about language.

I wanted young readers to see and feel the richness and strangeness of the worlds I created, but I had to be careful not to weigh them down with description. When I make a painting, I hope that it’s not overworked or leaden; it needs to “sing” to the viewer. Therefore my approach has to be simple, confident and from the heart. I’ve come to think that writing about art is the same. There needs to be just enough detail to entice and to set the reader’s imagination alight. It’s a delicate balance and involves just as much cropping as creating.

I love that expression “as much Cropping as Creating”. I also loved the first book (and the rest!) and really wondered how she'd approach any follow up story and indeed how they would be linked them to each other.

The second and third novels, The Crimson Shard and The Shadow Lantern, grew organically out of The Blackhope Enigma. There was no over-arching story, no grand plan from the start. Instead there were fascinating strands to take up and some new elements to explore, such as trompe l’oeil murals, alchemy and art forgery in The Crimson Shard. Early magic lanterns and spirit photography were inspirations for The Shadow Lantern. I enjoyed digging into these elements, putting them together and seeing what could happen.

I discovered how easy it is to lumber a narrative with too much background information! I ended up identifying with young readers who had not read the first or second book. What do they need to know? Will they become confused? How can I help them? The problem was that I was a bit too ‘helpful’ at times and there was a lot of back-story pruning that had to be done. Again, this is a delicate balance, achieved after much feedback from my editors.

One of the great pleasures of writing a trilogy was in spending more time with my main characters. At the beginning I had the daunting prospect of getting to know them, challenging them, making them grow and change. By the second book, I had a good idea of who they were and how they moved through the world; by the final book, it was a pleasure to be with them and to find out how they would approach the next obstacle I placed in front of them.

It would be great to have feedback on Teresa’s thoughts and books – please do get in touch.

I’ll leave her with the last word about writing the series, and hope that others have the same experience in their own writing.

It’s been a wonderful journey…

The Shadow Lantern has recently been published in the UK by Templar Publishing. To learn more about Teresa’s novels and artwork, visit her new websites at http://www.teresaflavin.com/

You won't be disappointed Sue - there's an artist's eye within the prose!