Women and the Smuggling Trade 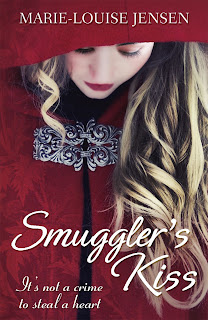 In Smuggler's Kiss, I have a young woman on board the smuggling vessel, taking part in cross-channel smuggling as well as land-based work. This was probably rare and would have mainly been the province of men. The tub carriers were probably exclusively male for good reasons. The tubs that they carried, one on their chest and one on their back, roped together, were heavy. The actual volume they contained seems to have varied, but each would have been approximately 5 litres. You only have to lift a 5-litre water container and imagine carrying two - in wooden barrels - up a steep cliff ascent to see why men carried the tubs. Even for them this work often had health consequences over time as it crushed the rib cage.
It was still sought-after employment however. A labourer could only earn some 7 or 8 shillings a week on the land at the time. Smuggling often paid as much as 5 shillings a night.
There was plenty of work for women in the trade, however. The brandy that was brought in from France was near proof (to save space) and clear to boot. It needed diluting and the English liked their brandy honey-coloured. The women usually did the work of heating the caramel mixture and colouring the liquor and also watering it down.
When tea was smuggled, the women in their costal cottages often cut and dried ordinary leaves to mix in with the actual tea to increase profits. I imagine that must sometimes have tasted nasty and could even have been toxic.
But as regulations around smuggling were tightened, the smugglers needed to become more devious. In this situation, women were suddenly very useful to them.
I've mentioned here before that revenue officers weren't allowed to rummage (search) women. That could have resulted in all kinds of abuse and irregularities. But it was very handy for the smugglers.
Bearing in mind that women wore very voluminous petticoats in the early Georgian era, it became standard practice to use these for concealment. Thus my character Isabelle wraps lengths of French lace around her legs and waist to smuggle it in through the ports. The revenue men suspect her bulky figure, but aren't allowed to frisk her.
Even more outrageous was a slightly later practice whereby women tied bladders filled with brandy and gin under their skirts and walked brazenly through the town with them swinging under their skirts, safe in the knowledge that the revenue men were - naturally! - forbidden from putting their hands up the good wives' petticoats.
This became a risky procedure. The danger wasn't from the revenue men, but from local youths who thought the greatest joke ever was to pierce the bladder with a knife or other sharp implement and watch the booze flood out over the carrier's shoes, stockings and onto the ground. Such a waste!

Posted by Marie-Louise Jensen at 12:40

Interesting! Do you know the old shanty 'Rye-raddy-rye' about a 'damsel' who's offering 'queer bungo-rye-raddy-rye' for sale from her basket?
'Said Jack to himself,
Now what could this be,
But the very best brandy from far Germany?
He gave her a sovereign and thought it not strange,
She said, Hold now me basket while I run for your change.'

But the damsel is a long time coming back.

He took a look in the basket -
A baby he spied!
Jesus, says Jack, this is queer bungo rye-raddy-rye!'

Obviously the young lady is tending to her own affairs - but under cover of working for smugglers!

Love the song, Sue! Nice to think of a man being left holding the baby for once.. I also love the stuff under the petticoats - reminds me of the guy hiding under the woman's petticoats in 'The Tin Drum.' I agree about the waste, though brandy would bother me more than gin...I wonder whether the tea was cut with raspberry leaves, or nettle would give a nice green tea taste. I always think nettle is very like Japanese green tea. You'd have to be very malicious to cut it with deadly nightshade, dog's mercury, or hemlock, though the former might give the tea-drinkers an interesting trip. Would the smugglers really have wanted to kill off the customers, though?

Interesting...I'm looking to see who else is blogging about lady smugglers...and who might be interested in collaborating. I am a writer/interviewer crafting stories about the lady pirates of the 1970’s before Reagan’s War on Drugs. I'll be following you and would love to hear from you or your readers.