Hannah Glasse and The Art of Cookery - Lucy Inglis 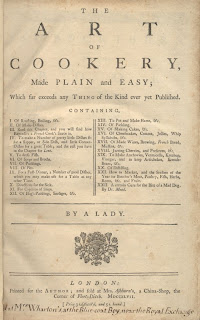 This week I participated in a short film for the Great British Bake Off on Hannah Glasse, one of the eighteenth century's most influential cookery writers. Hannah was the Mrs Beaton of her time, publishing a huge manual in 1747, called The Art of Cookery Made Plain and Easy.

The Art of Cookery was a great fat book of over four hundred pages, containing recipes for lavish meals, but also for using up every single part of an animal - udder, anyone? - and the splendid Chapter Seven, Of Pies. There are also a few recipes for medicine, such as the Certain Cure for the Bite of a Mad Dog, and household tips in A Receipt to Keep Clear of Buggs.

Hannah was born in London but grew up near Hexham, in her father's household. The circumstances of her birth and who her mother really was are not entirely clear, although she described her mother as a 'wicked wretch'. Hannah left home at sixteen to marry John Glasse, an Irish soldier. The two spent some time in service, but the majority of their lives were spent in London, where Hannah may have worked as a professional cook to provide additional income. Whatever she was doing in the years after her marriage, she was certainly acquiring a great deal of knowledge about kitchens, ingredients and cooking.

Aged 39, Hannah published The Art of Cookery. John died the same year. Although Hannah had probably married beneath her, there's no doubt that her husband must have supported her in the writing of such a huge book. It was an enormous undertaking, and one of the most comprehensive books of domestic instruction written in the eighteenth century. Hannah's aim in writing it was clear. She wanted to get rid of all the obscure timings and measurements, as well as overwrought recipes featured by her male contemporaries in their tomes, for 'in all Receipt Books yet printed, there are such an odd jumble of things so extravagant, that it would be almost a shame to make use of them, when as dish can be made as good, or better, without them'. Instead, Hannah wanted things to be simple and straightforward. She includes in each recipe clear directions on how hot the fire or oven must be, and instead of vague references to quantities, she uses comparative measurements such as a piece of butter 'as big as a walnut' or 'no bigger than a nutmeg'. And contrary to the idea that everything in the past had the life boiled out of it, Hannah instructed smartly, 'Most people spoil garden things by over-boiling them. All things that are green should have a little crispness, for if they are over-boiled they neither have any sweetness or beauty'.

The key to Hannah's success though, was that she was appealing to women like herself, who wanted to put on a good show with the bare minimum of assistance in the kitchen. Even the way Hannah chose to publish, anonymously as simply, A Lady, reveals the market she was aiming for: the emerging middle classes. 'I...only hope my Book will answer the ends I intend it for; which is to improve the servants, and save the ladies a great deal of trouble.'

The Art of Cookery was an instant success, but things did not work out so well for Hannah. The publishing of such a vast and expensive book eventually ruined her in 1754, when she was declared bankrupt. She recovered however, and went on to publish more books of kitchen instruction. None were as popular as The Art of Cookery and her finances continued to be rocky. She even spent a brief spell in the Marshalsea debtors prison (made so famous by Little Dorrit).

Hannah died in 1770, aged 62. She was not identified as the author of The Art of Cookery until the twentieth century, although many of her contemporaries had puzzled over her identity, including Samuel Johnson. So clever and comprehensive was the book that many thought it must have been written by a man. Hannah's legacy was far-reaching, and the recipes from The Art of Cookery are still easy and workable today. It's a great book, giving a real insight to an eighteenth century kitchen and dining room, and a very enjoyable read. Hannah's voice is strong, feminine and no nonsense, as well as having lovely touches of wry humour. You can read The Art of Cookery here.

HG blogs are so excellent for introducing you to completely new and luscious books and characters - many thanks for this one!

All these remarkable, unheard-of women! Thank you, Lucy, for telling us about another one.