The Ghost of a Palace, by Laurie Graham

The Changing of the Guard at Buckingham Palace is on every tourist’s list but personally I’ve always preferred the daily ceremony at Horse Guards, perhaps because of its unpredictable ingredient of horse behaviour. I recently recommended it to American friends who were visiting London and one of them, a stickler for detail, asked me what exactly the cavalry are guarding there in Whitehall. It was a good question. Nothing but a bunch of old offices, apparently. And so I was obliged to revise my shaky London history.

The story begins with Henry VIII. Having disposed of Cardinal Wolsey, Henry appropriated the Cardinal’s Thames-side palace (and its well-stocked wine cellar) and began a grandiose project of rebuilding and extending it. It became the great Palace of Whitehall, bigger than Versailles, bigger than the Vatican. To the west of the palace Henry commissioned covered tennis courts, a bowling green, a cockpit and a tiltyard, where Horse Guards Parade now stands. It was a kind of Tudor leisure centre. 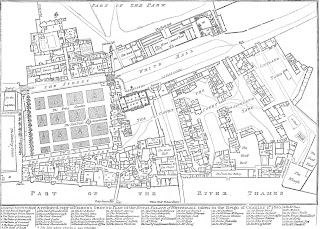 He also turned his gaze further west to a watermeadow owned by Eton College, bought it, enclosed it, and used it for hunting deer and duck. It became St James’s Park. And the hunting lodge Henry had built on its northern perimeter is what we now know as St James’s Palace.

This 17th century painting by Danckaerts gives you some idea of Whitehall Palace. 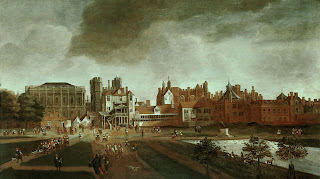 We are looking east, from the park. From left to right: the Banqueting House, the crenelated Holbein Gate that linked the riverside palace with its sporting amenities, the tall turrets of the tennis court building, and the octagonal roof of the cockpit.

Monarchs came and went and left their mark on Whitehall. Charles I, more artistic than sporting, had the cockpit converted into a Masque House. He was worried that smoke from the masquers’ torches were ruining the Rubens ceiling in the Banqueting House. Soon after the Restoration Charles II raised three mounted troops to guard the palace, in case the natives got restless again.

In 1698 fire ripped through the Palace and destroyed all but the Banqueting House. The official residence of the Sovereign moved to St James’s. It was never popular. William III said its badly ventilated rooms made his asthma worse, and promptly shifted to Kensington Palace. George III found it so impractical for his enormous family that he bought a more comfortable residence nearby, Buckingham House, for his wife and children to live in when they were in Town. Then, when a fire destroyed part of St James’s Palace in 1809, Buckingham House began its career as the preferred royal residence. George IV enlarged and aggrandised it into Buckingham Palace and Queen Victoria made it her London home.

St James’s, however, remained and remains the official residence, and across the park, in Whitehall, the mounted guards continued to patrol. They still do. Which answers my American friend’s query. More than 300 years after Whitehall Palace burned down, the Horse Guards in Whitehall still mark the official entrance to the Sovereign’s London residence, now situated more than half a mile away. They are, you might say, the vestigial tail of a once splendid Whitehall court.

There are some other vestiges, most of them hidden from public view. Cardinal Wolsey’s wine cellar is in the basement of the Ministry of Defence. Part of King Henry’s Cockpit and tennis courts are within the current home of the Cabinet Office and abut the tradesman’s entrance to 10 Downing Street. Only the Banqueting House remains in all its glory. It’s open to visitors seven days a week. Do go and see it if you’re in the neighbourhood. And then, when you look across the street to the Horse Guards, you’ll know what those mounted troopers are doing there. Not a lot.

I encountered those horses last Monday, and very fine and frisky they were too. St James' Park itself is a wonderful institution at tulip time. I have never seen such a rampant display of obscenely juxtaposed colour as those flowerbeds that face the parade ground.

I didn't know any of that. What an excellent post! :)