In 1976, I came out.  When I revealed this to my children many years later they were extremely surprised, and really rather disappointed when I told them that 'coming out' didn't always refer to sexuality.  In my case, it meant I did the London Season.  This was not a surprise: it was a shock.  The Season?  Wasn't that ancient history? And really!  What was I thinking!

What indeed.  I came out in 1976, but the Season, those months between Christmas and late-ish June when 'everybody' rushed from dinners to balls to parties of various kinds, evolved through the 17th and 18th centuries.  As Amanda Foreman tells us in her book on Georgiana, Duchess of Devonshire, the Season was designed to 'entertain the upper classes while they carried out their political duties'.   For men, the primary duty was plotting.  For women, it was dancing, dazzling and above all, dressing both body and hair:  the Duchess of Devonshire once appeared with fruit, stuffed birds and even a ship in full sail on her head.  Oh, the fun and sweat, headaches and lice.  Later, for parents with daughters, the Season's focus was bagging a husband:  a kind of over-dressed, over-privileged dating agency.

The task of girls was clear:  to be presented at Court without falling over, to cause the right sort of sensation at the right sort of parties and to be married off to Someone Suitable before the Season ended.  Pity the parents obliged to fork out for daughters needing more than one Season to secure their man.  But lucky Georgette Heyer and Barbara Cartland!  They made fortunes from novels about the Season, since exquisite but poor Lady Jemima meets dashing but scarred Lord Moneybags never goes out of fashion.  Indeed, Barbara Cartland hit the jackpot, and not just with her books.  Her daughter, Raine McCorquodale (the late Princess of Wales's step-mother), was Debutante of the Year in 1947.

I was not Deb of the Year.  But there, in the brochure for Queen Charlotte's Ball of 4th May 1976, after, bizarrely, advertisements for Dettol, North Thames Gas, Woolworths and Playboy, is my name.   I come between Grania Thwaites and Melanie Turner (whatever happened to them), amid all the debutantes who that year donned white dresses and gloves, set sail for the Grosvenor House Hotel in Park Lane and, having been drilled most fiercely by some matron or other, paraded down the ballroom stairs to the March from Handel's Judas Macabaeus and curtsied to a cake.  Yes, a cake, not to the Queen of Puddings or even the Queen herself - she, sensible woman, stayed at home.  The cake came courtesy of Queen Charlotte, wife of George III.  She was a nice woman, most charitable.  Why we remembered her with a cake I can't recall.  Whether we ate the cake, I don't recall either.  Probably not.  As a deb, you were too conscious of your clothes. 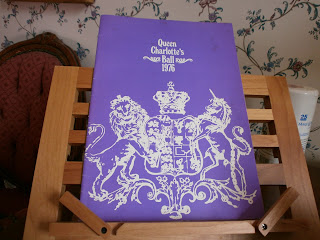 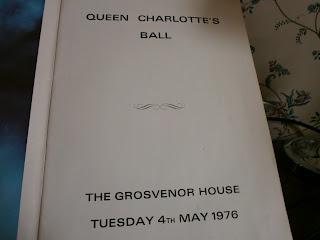 I do remember the ball.  It was torture.  Fresh from my convent school and brought up in north east Lancashire, I knew almost nobody.  My dress was not bright white, but cream: a Mortal Sin. The boy hauled in to accompany me had no interest in either the ball or in me.  I had no idea what to talk about.  He made no effort.  I was a nervous dancer.  He was too superior to try.  Over thirty years later, I saw this 'boy' again and reminded him, laughing now, of that excruciating evening.  He looked at me.  I stopped laughing, feeling 17 again, and not in a good way.  Reader, my Season was a failure:  I didn't marry him, nor any of the other debs' delights.  Thank God my parents didn't try again.

I have a friend who was similarly humiliated. She keeps telling me I should write a book about her experience. At least she can laugh about it now - as an outstandingly successful professional woman. It was, as she puts it, "sheer torture at the time".

Fascinating and how I understand your torture. Thank you for sharing

Brilliant! Anyone who's stood awkwardly at a party must guess that these novels romanticize the season; many of the poor debs must have experienced it just as many of us experience any party as a young person. If you're not the popular one, it's fairly miserable. Thanks for sharing.

Well, here I am Grania Thwaites that was! I honestly can't remember too much of that evening but I do remember I had a lovely dress and walking down some stairs or round a cake. What became of me? Workwise you can check out my Linkedin, I too never married a deb's delight. I found the whole thing terrifying!