The Legend That Is... by Sue Purkiss 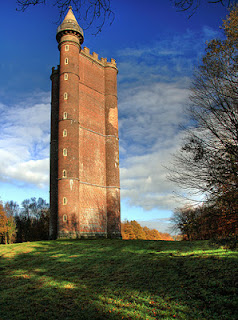 Last weekend, I visited the tower in the picture. No, it's nothing to do with Rapunzel: it was built in honour of a legendary Dark Age king. I wrote a book about him a few years ago. Much to my delight, it's recently been come out as an ebook, and I'm writing this post partly to celebrate that.

I'm also writing it because I found it recently that Michael Wood has just made a documentary series about this same king, which will be on BBC in the autumn. It feels as if there's something in the air: perhaps the hour of this king is about to come again!

So who was he? Well, here are some clues.

Have you got it yet? A few more clues...

So - not Arthur, but Alfred. People often confuse the two - I can't tell you how many times I've been asked about that book I wrote about King Arthur. Don't get me wrong - I'm a great fan of the Arthurian legend. But Alfred was, famously, a great king. He achieved things. He made a difference. Yet now, if you go into most classrooms - or probably most pubs - you're lucky if you find anyone who's heard any more than a garbled story about some badly burnt cakes. I hope that's going to change!

Finally, here are the words which are carved on the stone tablet set into the front of Alfred's Tower.

Alfred the Great
AD 879 on this summit
Erected his standard against Danish invaders
To Him we owe
The origin of Juries
The Establishment of a Militia
the Creation of a Naval force
Alfred the light of a benighted age
was a Philosopher and a Christian
The Father of his People
The Founder of the English
Monarchy and Liberty.

Fantastic! I never knew all that...good luck with your ebook, too! Thanks for the post.

I live close to Stourhead so I recognised the tower straight away.

Wasn't Alfred the one who arranged for translations of a lot of Greek and Latin texts? Or am I imagining that?

(I'm also reminded of 1066 and all that "Alfred ought never to be confused with King Arthur, equally memorable but probably non-existent and therefore perhaps less important historically (unless he did exist)")

I like the sound of your book - just bought it :-)

ooh, thank you for buying my book, Marjorie, and I'd love to hear what you think of it! Yes, he did arrange for texts to be translated so people could read them in English. And that bit from 1066 really sums up the confusion - thanks!

Here, here! - from another big fan of Alfred. Good luck with the e-book!

Lovely blog - of course there is some significance in the fact that both kings were renowned for 'turning back the tide' of invasion - only, as you say, Alfred was more successful. However - I shall be blogging about this next week - in some parts of the country, we do speak Norse, like 'bairn' ('barn') and 'fell' for a mountain, and 'dale' for a valley, and so on. Though I guess dale is probably not dissimilar to Anglo-Saxon for valley, since it is cognate with German 'tal' and Vallee is a French word.. But wasn't it Alfred's achievement that he came to an accommodation with the Danes, converted them, and so on? Sorry, I ought to go back and re-read your excellent book, which I do have..

I fell in love with Alfred (in a purely platonic way, of course) when I studied Anglo-Saxon for my Eng Lit degree. He did much to promote the English language.

And to add to what Leslie Wilson wrote: living in a remote-ish area of Yorkshire, I can vouch for the Danish influence in place names and words such as garth , gyll, beck and keld. So I have a soft spot for the Danish, too. They were no more bloody-thirsty than the early Angles and Saxons. I think I am descended from both.

My very first Ladybird book was about King Alfred. I've just looked online and I can't find the same edition - I'll just have to read yours!

Weren't those Ladybird books great, Jean? I had the one on Queen Elizabeth, and I read it and copied the pictures over and over again. Mine disappeared too, but I was lucky enough to find another in Hay-on-Wye a few years ago. But yes - DO read mine! And then you could go to see some of the marvellous places mentioned in it, as I did when I was writing it. (though not Rome, sadly, which Alfred visited as a child.

Alfred did defeat and then convert Guthrum, his major enemy. But there were still lots of other bands around; and the Danes lived to the east, in the Danelaw - so they certainly maintained a huge presence and influence. But if Alfred had been defeated and killed, I think there can be no doubt that England would have developed very differently. Who can tell what effect that would have had - on the development of America, for instance? I'm not suggesting that would have been a bad thing, but it would certainly be a different one!

What a glorious post about an admirable hero. Good points of comparison too.