A BEAN FEAST FIT FOR A KING… FEVES – Dianne Hofmeyr 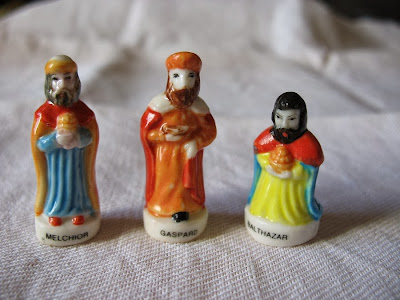 If you buy a cake on 6th of January, chew carefully, you might find a porcelain charm in your mouth.

I’m jumping ahead to the 6th to the feast of Epiphany when the arrival of the three kings, la fete des rois was celebrated with a cake. The custom dates back to the Middle Ages when a cake made of flaky pastry filled with frangipane paste, was cut into equal slices and placed on a table. Originally the trinket in the cake was a real bean, now replaced by a porcelain charm. A child was put under the table and when the mother pointed to a slice the child had to call out who the slice was for. Whoever found the feve in his slice became king for the day and wore a gold paper crown.

The kings are of course Gaspar, Melchior and Balthazar. But the festival is a relic of pagan times when during the period of the winter solstice, the return of the sun was celebrated with a feast and during the festivities even a slave could become king for the day. Why a bean? Because of its similarity to the shape of a human embryo. The bean plant is usually the first to emerge from the earth after winter and celebrates life. 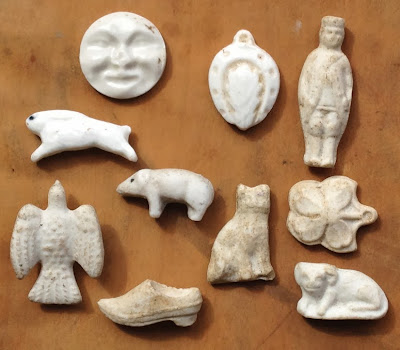 I can’t recall celebrating Epiphany with a feve in a cake as a child. It seems it’s a Catholic custom but perhaps someone reading this might have their own memories of this cake known as the gâteau des Rois in France, the bolo rei in Portugal, rosca de reyes in Spanish countries but tortell in Catalonia, vasilopita in Greece and Cyprus and banitsa in Bulgaria. The closest I come to these feves, are the tiny chalky porcelain figurines that my mother took out of a box in the cupboard every year to put on top of the Christmas cake.

Who remembers the scene in Barbara Kingsolver’s "Lacuna" when that fabulous cook Leandro is teaching the boy, Hamilton William Shepherd to make the Epiphany cake?

“The rosca de reyes is hardest to make: the cake called Ring of the Kings using white flour the same as for tortillas. A blob of dough fit for a king is rolled out on the table as long and fat as a sea slug. Poking it and laughing. The thing of a king… (the text is a bit ruder here but I’ve left off some words in case of complaints!)

Leandro is usually much more pious. He made the cake into a ring by putting the-thing-of-a-king in a circle and pressing the ends together. The token goes inside, a small baby Jesus that looks like a pig.

All the rest of the year, the clay token sits in a jar in the cabinet waiting to go into this cake. Leandro took the little pig Jesus out of the jar and kissed it before putting it in the rosca. Round jellied fruits go on top but he put a square piece where the token was inside, his way of marking it. Reach for that one he said when the dish of cake is passed around.” 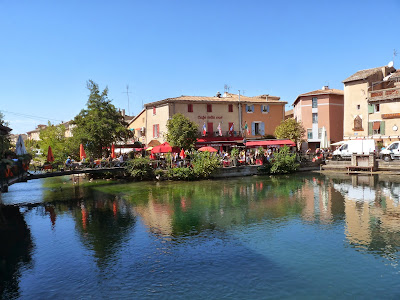 I first discovered feves at the market of L’Isle sur la Sorgue in the south of France. The little handful I bought with their exquisitely painted faces, is not with me now as I’m writing this from the southern tip of Africa. They are sleeping safely on gauze in their porcelain box in London – so I can’t show you my own Mary on her donkey, nor the shepherd with his crook, or my wise kings. Apparently there are so many collectors of feves nowadays that in France they have their own name – fabophile.

The best feves to collect go back to before 1914. They were manufactured originally in Germany. And from about 1874 onwards bakers began to replace the original bean with a tiny doll made of soft paste hand-painted porcelain. Then after the war, Limoges took over production and the baby doll evolved into other shapes. The last manufacturer of traditional porcelain feves in France is a factory in Clamecy, Burgundy. 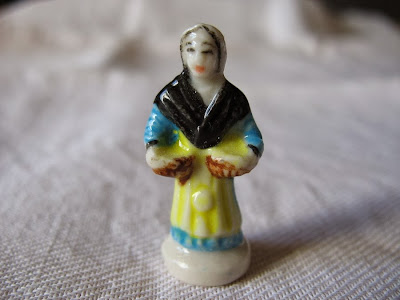 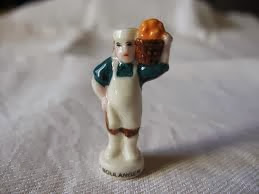 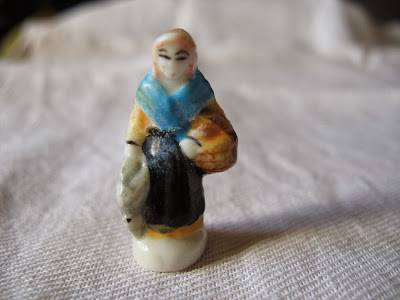 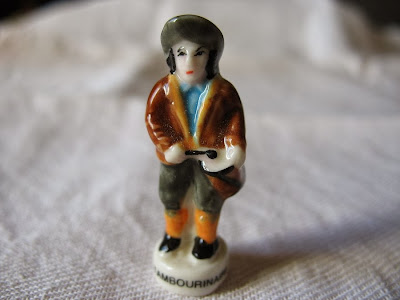 “They brought in the kings’ cake. Every year Monsieur Chantal was king and he always proclaimed Madame Chantal queen. So I was astounded when in a mouthful of cake, I felt something hard and came near breaking my tooth. I quietly removed this object from my mouth and discovered it was a tiny china doll, no larger than a bean.”

So if you eat cake in the next few days, be warned – you might find a feve and be king for the day. But you might equally end up at the dentist

We didn't follow this tradition in my family, but I've heard of it. Thanks for the pictures and the history.

A charming tradition. Wishing everyone lots of fine cake crammed full of luck - with no troublesome teeth to follow. (The bean may have been less showy but also less dangerous.)Thanks for this post!

There are so many traditions that I knew nothing about! Thanks for sharing!

How lovely! I had read about feves somewhere, but had forgotten. We used to have little objects and a silver thrippence (3 old pennies) in the Christmas pudding, but don't do that any more...