LIONHEART by Stewart Binns - one for the History Boys! 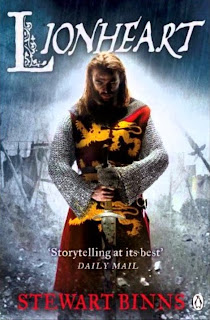 When Mary asked if anyone wanted to review this book, I leapt at the chance. Crusades! Battles! Knights! King Richard the Lionheart! After just finishing a series about King Arthur, how could I resist?

Although the subject matter appealed, I must admit this is the first time in a while that I’ve read an adult historical novel without a fantasy element. Also I’m a History Girl as opposed to a History Boy, which means I’m probably not the ideal target audience for this book… all of which I'm explaining up front so you can put my review into context.


QUICK REVIEW
This is the story of Richard Lionheart and the Third Crusade, written from the point of view of the king's trusted military advisor and brave knight Sir Ranulf.

Read it for:
Battles.
History.
Cool anecdotes, such as Richard selling his sword as King Arthur’s mythical sword “Excalibur” to the gullible King of Sicily for an island’s ransom (loved that bit).
King Richard's fabulous horse.
Male viewpoints.
Christian view of the Crusades.
Do not read it if you are looking for:
Romance.
Female viewpoints.
Political correctness (especially if you are female, Muslim, or French).

LONG REVIEW
Stewart Binns writes big, epic novels about real macho heroes. Lionheart is packed full of history – in fact, with the 70-page glossary and detailed maps at the end, in parts it felt almost as if I were reading a non-fiction historical text. But this aspect of the story should appeal to historians, so while I am not enough of a scholar of the period to tell you if the history is accurate, it certainly feels as if it is, right down to the last drop of blood - which gives the novel an authentic atmosphere.

Early on in the book, Sir Ranulf undergoes a sadistic ordeal to prove he is brave enough to be one of the two men sent to guide young hotshot prince Richard on his campaign (the ordeal on page 14 is where the book first grabbed my attention and Sir Ranulf shows his mettle). Richard's second guide is Father Alun, the priest put in charge of the Lionheart’s soul - which proves just as difficult a task as guiding the Lionheart in military matters since, when we first meet Richard, he is less of a hero than a spoiled young prince with a rag-tag army and a campful of whores… do not expect too much political correctness here! Sir Ranulf’s attitude to women is little better, since when he falls for the pretty Basque girl Negu in the king's camp, this promising love interest is described as (children look away now): “the cock was crowing by the time my cock wanted to sleep, but she was still eager for more and would not rest until I had satisfied her one last time.”

Negu, however, is soon packed off to be a nun, leaving Sir Ranulf and Richard free to concentrate on the Third Crusade in answer to Saladin’s jihad in the Holy Land. At this point, the story picks up pace, since the Crusade gives the Lionheart a bigger purpose beyond his petty squabbles with his family back home, and allows his bravery and daring to shine where it is best put to use – on the battlefield, leading his men. Richard’s transformation from spoiled prince to true hero takes place during the Crusade, which also gives Sir Ranulf an opportunity to show some character beyond his obvious purpose as the convenient narrator of Richard Lionheart’s story. In fact, I sometimes found Sir Ranulf to be more of a sympathetic character than the Lionheart himself, and the best parts of the book for me were when Sir Ranulf gets to tell his own story rather than his king's.


Of course, a novel of this kind is not only about one man (or woman). It is a weaving of many different threads into an epic tapestry, and the stories picked for focus are naturally those that most interest the writer. As a History Girl, I’d have liked to see a bit more of Richard’s fierce elderly mother, Eleanor of Aquitaine, who was named “Queen of the Amazons” by the men after her part in the Second Crusade. I was also intrigued by the aging nun Hildegarde, another woman Richard respects and seeks counsel from. The younger women seem to be there as mostly eye-candy for the men, but the story of the tragic princesses captured from Cyprus who later travel with Sir Ranulf behind the Muslim lines brought a tear to my eye.

In bringing the Lionheart's story to today's readers, Stewart Binns has chosen to tell the adult equivalent of a boy's own adventure story, focusing on Sir Ranulf and King Richard, and in this respect the book delivers – and delivers big time. This book would make a great Christmas present for the man in your life.

(The History Girls received a free copy of this book from the publisher in return for an honest review.)

Katherine Roberts normally writes fantasy and historical fantasy for younger readers featuring feisty heroines such as King Arthur's daughter Rhianna Pendragon (Twitter @PendragonGirl). But she once ventured into nearly adult historical territory with I am the Great Horse, her novel about Alexander the Great told my his (very macho) warhorse Bucephalas, of whom Richard the Lionheart would no doubt have approved!
Posted by Katherine Roberts at 00:30