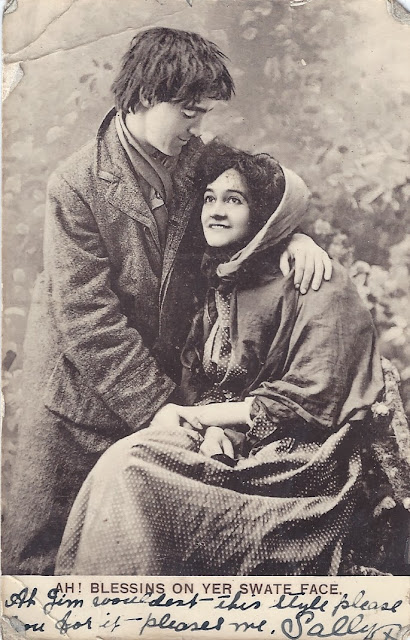 When my mother-in-law was clearing out her house, prior to going into sheltered housing, she said to my husband and me, who were there for a visit: 'Fetch that out from the wardrobe. That's Mammy's post-card album. I'll put it in the bin.
In chorus, we said: 'Oh no, you won't!

The album opens a fascinating window on Ulster Protestant culture in the Edwardian era. Maggie Milford was clearly quite a lass, to judge by the amount of valentines that were sent to her. 'Are they from Grandpa?' David asked. 'Not at all!' said Maggie's daughter, proudly.

This one, however, was not addressed to her or even sent by her, as the signature on the front is 'Sally' and it's addressed to  Mr Jim Craig at Point Street Bakery, Larne. I can't completely make out the message from Sally to Jim on the front, but the rear side sports this remarkable verse:

Most of the postcards, however, are addressed to Maggie, and some of them are startlingly improper and not at all what I would associate with a good Presbyterian lass of that era. Like this one, dated 1906. 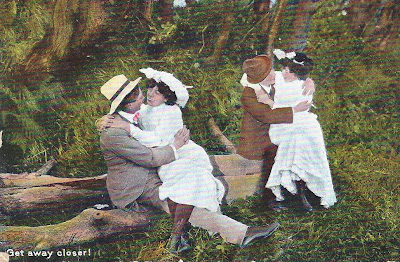 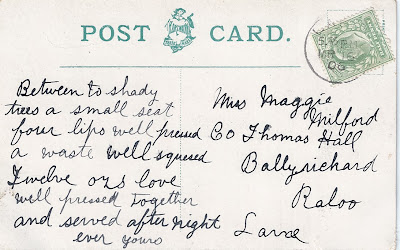 Whoever wrote it wasn't too hot on spelling, that's for sure, and 'waste' for 'waist' is a little offensive, I think..For those not familiar with the old Imperial avoirdupois, Twelve oz means 12 ounces.
This next one is even raunchier. The message says: 'This is the sort of trade goes on/Down by the six mile waterside. Just look how happy they are in each others arms, with love.'  Presumably there is some irony there, given the precarious-looking position of the snogging couple. And the rear side says: 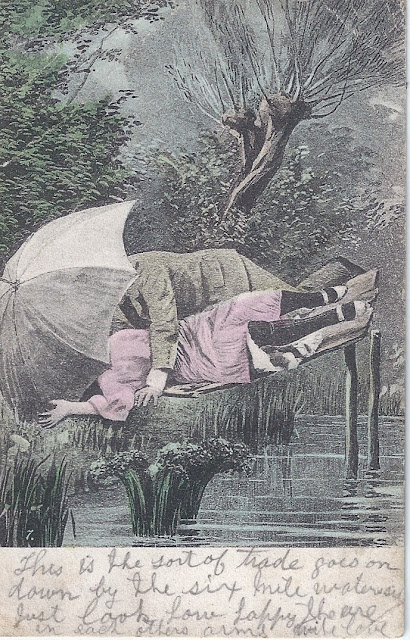 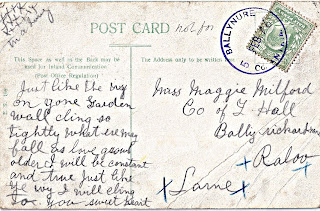 Just like the ivy on yone (sic) Garden wall cling so tightly whatever may fall, As love grows older I will be constant and true. Just like the ivy I will cling to you sweet heart.' I think the message beneath the array of kisses is 'in a hurry' but I'm not quite sure. Perhaps this one was from William John Curran, since they got married about 1908-ish, and at that time they were saving up. He had inherited half of his father's farm, but no farmhouse - his elder brother got that - and so he had to build one. That was Ferndale, which David can just remember visiting before they retired, whose driveway was lined with daffodils in spring, planted by Maggie. She became a great gardener. By the way, the Six-Mile Water is a river in southern County Antrim. 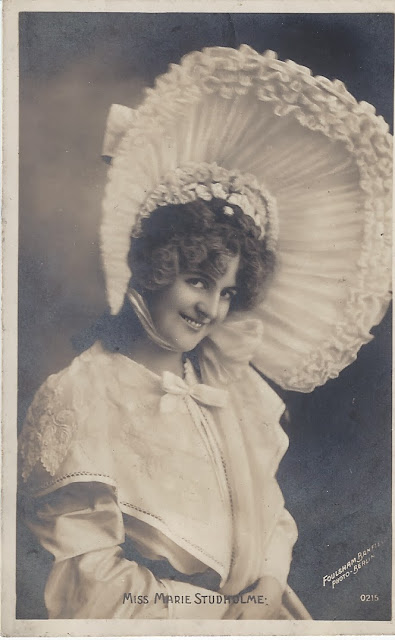 Here is Marie Studholme, a much-photographed music-hall star of the period. My grandma-in-law must have liked her, for she appears twice. She was one of the Gaiety Girls once, was divorced and remarried, scandalous even in my childhood! and also learned jujitsu! She toured the British provinces, so I wonder if she came to Belfast. Going there to see her would have been one big outing for Maggie, to whom even Larne or Ballyclare would have been the Bright Lights. 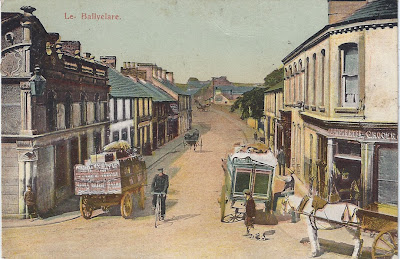 And here is the metropolis of Ballyclare on a typical busy day.. The postcard comes from another lovesick swain. However, there is a postcard of the Big City, Belfast, and even one of New York with its skyscrapers. 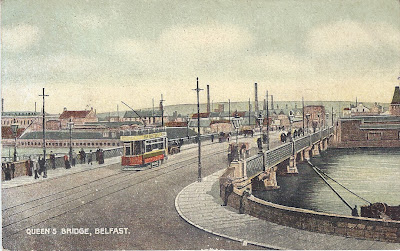 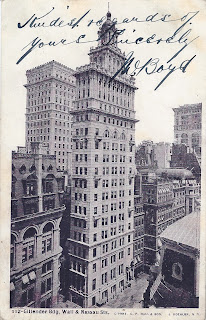 The message on the front of the New York postcard is all the writing there is. 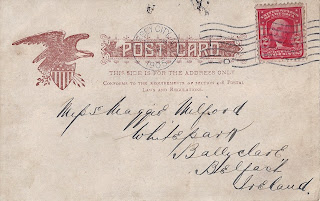 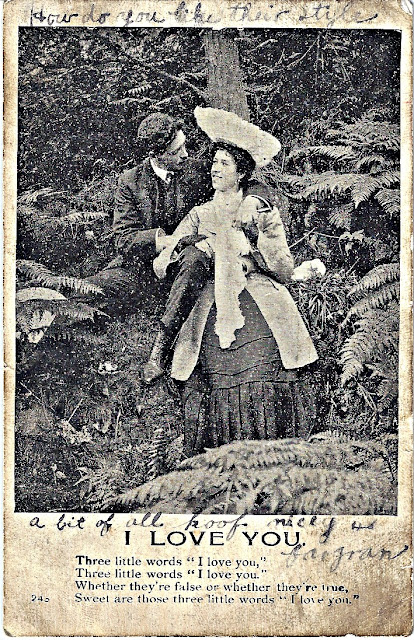 Talking of lovesick swains, this one is really passionate, and it makes you wonder about the goings-on at the Bethel Harvest Home.   I hope this one was actuallly from the future Grandpa Curran! Especially with all the ferns, and the fact that they called their farmhouse Ferndale. Pity it is in such poor condition. 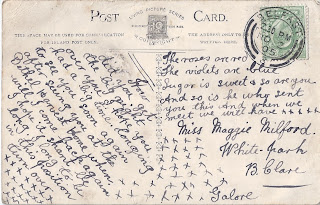 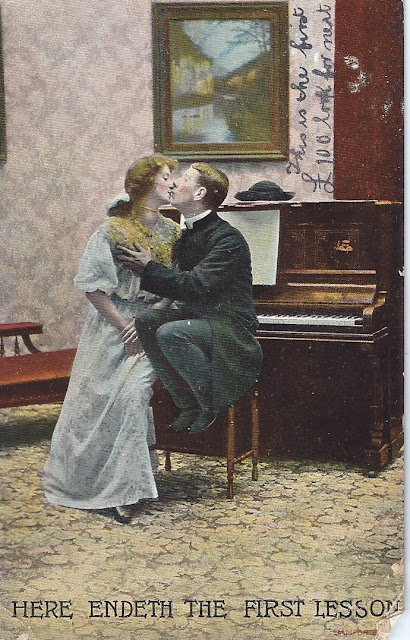 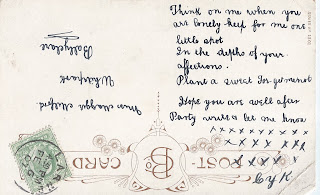 We thought at first that this one must be, and that he was telling her he had saved so much towards building 'Ferndale' but the verse on the back is signed 'K' so this is another one who hopelessly adored Maggie Milford. There must have been some hearts broken when she did get married. There is probably some socio-historical significance to the clergyman, and I wonder whether Anglicans wore those kinds of hats, or whether this is a Catholic priest, in which case it would be a bit of Protestant cynicism about the methods and morality of the 'Cartholic' priesthood? If anyone has any idea, do let me know. 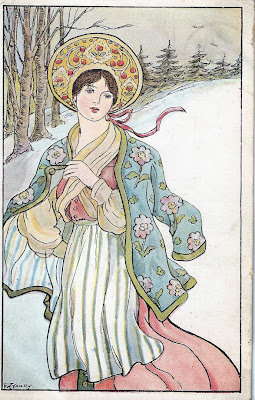 This one has a definite Russian-ballet look about it. On the back, however, it says 'Kiss me Quick.' 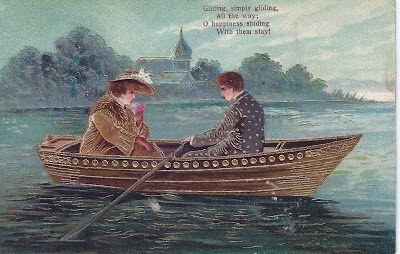 I picked out this one because it is much more what I would think of as a typical Edwardian postcard, though why is the lad got up like a Pearly King? Again, if you know, do tell me. However, the back reflects the usual preoccupation with love and flirtation. 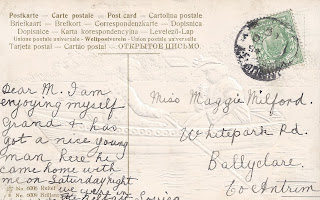 I must apologise for inadvertently chopping off the last line of this postcard. It reads: 'We were in the Belfast. Louisa. I wonder if the nice young man actually came in and was introduced to Louisa's parents, or whether he only saw her home? My impression of one-time Northern Irish country mores, gleaned from my mother-in-law's family, was that followers weren't encouraged at home until the engagement had happened. Indeed, 'not encouraged' is the understatement of the century, though when people did manage to get married, they were given a slap-up wedding. So these postcards happened in the midst of a hot-bed of romantic and sexual fantasy, which was kept, like farm dogs and cats, strictly outside the house, but crept in on the postcards, to be giggled over between the girls, probably in their chilly bedrooms, with innuendoes and blushes and cries of 'Away out o' that wi' you!' (one of my mother-in-law's exclamations which we use now with affectionate mimicry).

That's just a small sample of the cards, some of which are just like today's text messages: Like this one - how idyllic Glenoe must have been, with practically no traffic! But a couple of stereotypically picturesque 'Irish types' and I think that is a jaunting car. 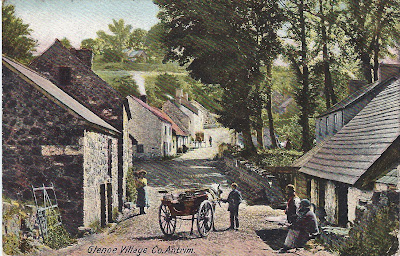 The message on the rear side reads: 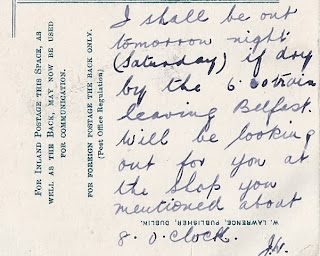 Now who sent this, and was the shop a romantic rendezvous?

There are plenty more of the raunchy ones, which all goes to show that our grandparents and great-grandparents were a lot less prudish, perhaps, than the likes of the Sitwells would have us believe. To be sure, it was the Edwardian age, but if you read Matthew Sweet's excellent 'Inventing the Victorians', you can see that the stereotypes were created and superimposed by the Victorians' children. Well, nobody wants to think about their parents having sex, do they?
Since we are coming up to Christmas, here is the last postcard. 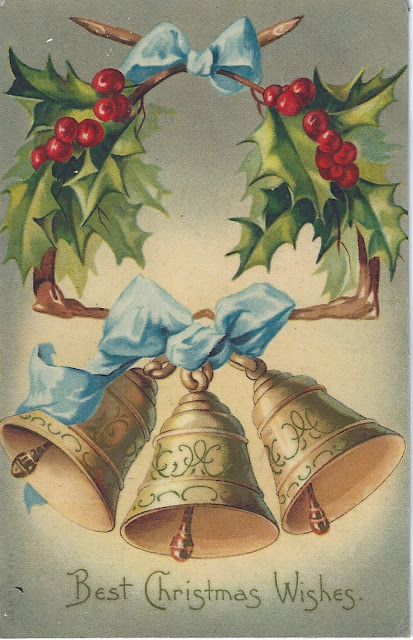 A very happy Christmas to all our readers, from the Edwardians and from me.

What a find! Thank you for sharing.

I'm pretty sure the message on the front of the first is:

"Ah Jim wouldn't this style please you for it pleases me. Sally x"

These are great, Leslie! Fabulous find!

These is not what I would have expected at all. What a revelation. A great find indeed and worthy of preservation.

Style refers to clothing, itinerant -vae. Thanks for decypherng this. My grandmother used to nudge me, when she saw people she thought very badly-dressed, and say ironically 'Great style, Leslie!' The other thing was to say: 'You see some quare sketches!' Quare, in Ulster Scots, means 'right' in the sense of 'a right something-or-other.'
Leslie

I mean my mother-in-law, not my grandmother! And I haven't touched the home-made quince vodka...