A Book of Beasts by Kate Lord Brown 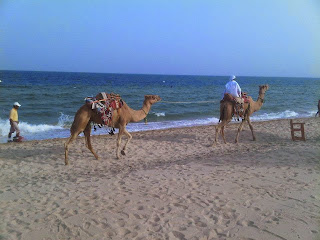 Choosing a book for a reading at the newly opened Doha Children's Library, it was hard to select from the well-loved, (read: torn, chewed, scribbled on), selection on our shelves. I narrowed it down to Slinki Malinki, Six Dinner Sid, and We're Going on a Bear Hunt. Browsing the shelves of the library afterwards, it struck me how many children's books feature animals - and I couldn't think of a single adult book with an animal protagonist. Can you? The last ones I remember reading were in my early teens - Animal Farm, Duncton Wood, Stonor the Eagle, (following on swiftly from an entire bookshelf of horse books). So many of the great children's books are peopled with animals - Aslan in Narnia springs to mind, perhaps you can think of other favourites? What happens - when do we 'grow out of' books with complex animal characters? 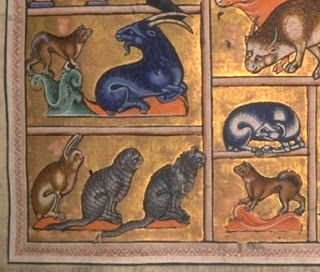 There's certainly a long history to the love affair between animals and literature, going all the way back to the medieval Bestiaries. As long as there have been books, there has been the desire to categorise, to illustrate, to understand the animals that share our world. I remember a copy of Diderot's 1751 Encyclopedie in the gallery I worked for in London - the illustrations were clearly not 'from life' and quite fantastical. But then, imagine trying to describe a duck billed platapus to someone who had never seen one before. 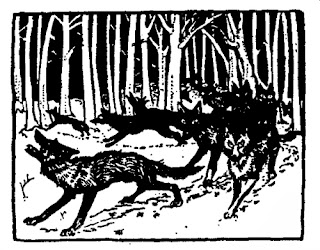 One yearly December tradition is Masefield's 'Box of Delights'. I love Judith Masefield's illustrations for the first edition of her husband's work - stark and lovely: 'the wolves are running ...' It is a tale that weaves fantasy, magic and the 'real': Herne the Hunter transforming into a stag, a phoenix rising from the embers of a pub fire, and lovely Barney dog trotting faithfully at Hawlings' side down the centuries. 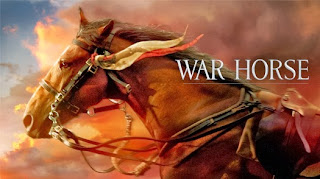 Perhaps it is 'children's' literature, but I know a lot of adults who still adore the story. Maybe the best of children's historical fiction does this, transcending age - Michael Morpurgo springs to mind for his animal characters, like noble Joey, the unforgettable War Horse. 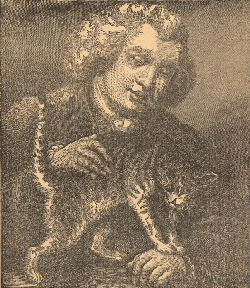 Writers and animals: 'Why yes, Sir, but I have had cats whom I liked better than this ...
but he is a very fine cat, a very fine cat indeed.’ Boswell on Johnson and Hodge

Admittedly, I am the kind of person who is as likely to ask after your dog/cat/horse as your human family, but recreating 'real' historical animal characters is tremendous fun. The newly finished book deals with a particularly tense few months in Marseilles in 1940, and the presence of Dagobert the faithful black poodle who belonged to the young American heiress at the heart of 'the real Casablanca' humanised scenes of the novel. The fact that 'the artist's Schindler' then adopted Clovis, a black poodle puppy, instead of rescuing the war orphan his wife hoped he would bring home to New York, spoke volumes about his character. That must have been an interesting conversation. 'Poo-dog ...' (yes, that was his nickname for her) '... I know you wanted a baby, but I've brought home a poodle.' 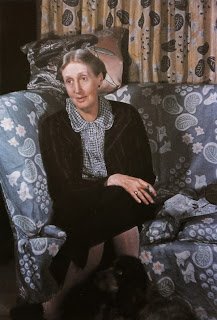 I'd be fascinated to know if anyone can suggest adult historical fiction with animal protagonists, because I'm still drawing a blank. I can think of a few 'bit parts', and there's even a classic scriptwriting text 'Save the Cat' which reinforces the value of animals as a reflection on the human characters' strengths and weaknesses, (the thought being that if the protagonist shows his decency and compassion by 'saving the cat' literally or metaphorically, we identify with them). When so many writers work with four-legged companions at their side, it's strange that they don't appear at the heart of their fiction more often. But then there is ... 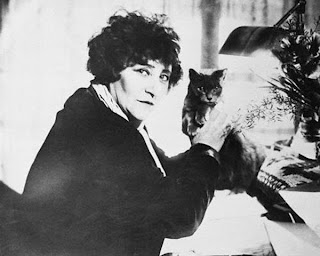 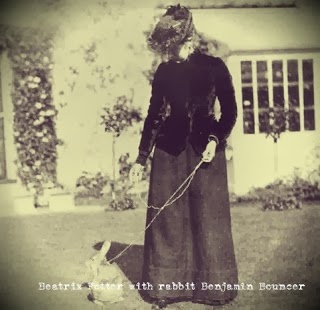 If you are enjoying some pre-Christmas boondoggling, there are
more wonderful photos of writers and their animals here and here.

I've written with a succession of dogs dozing under the desk, from a rescued husky/MalamuteX in Spain, to an Afghan hound who had more in common with Muir's 'What-a-Mess' than a show dog. This evening there's a pencil stealing pug snoring at my feet, and a rescue flame point SiameseX draped across the bookshelf. All three of us send the HGs and everyone reading good wishes for a peaceful and happy Christmas to those who celebrate it, and we look forward to reading and writing with you next year. If you write with animal companions, it would be fascinating to hear who shares your writing day? 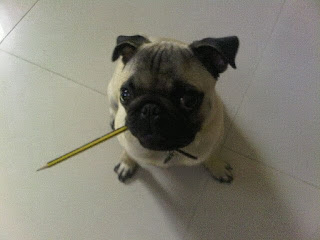 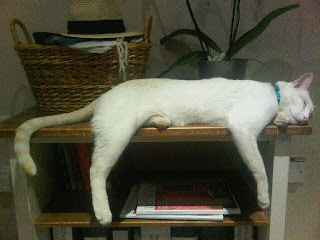 I can't think of any adult books with animal protagonists, though as you mentioned there are several with minor characters (my own "Camelot & Vine" has large secondary roles for a horse and a wolf-dog).

But you've got me thinking. If I come up with any, I'll let you know.

I love animals of all kinds, though I'm partial to horses and dogs. I can't fit a horse into my office, but I love your pencil-stealing pug. My boxer/pit bull mix was my writing partner and office mate. I miss him very much.

Thanks - I'd love to know if you do think of any, Petrea. Shall look for 'Camelot and Vine' - very fond of wolf-dogs (Faber, our husky x malamute was often caused panic amond the orange-pickers running through the groves near our home in Spain:)

Thank you for a lovely post, Kate - and I think it's going to be your fault that a dog moving in and out of my current WIP will now be allowed to stay.
But my favourite adult novel with an animal protagonist is the beautiful 'Carnevale' by our own History Girl Michelle Lovric. She has entire chapters narrated by Casanova's cat!

"White Fang" by Jack London is an adult book told mainly from the POV of a wolf.

Thank you, Louise and Caroline - adding 'Carnevale' and 'White Fang' to the list!

How about a classic? Orwell's Animal Farm?

And White Fang takes me right back to school days. :-)

The Book of Night with Moon and its sequel, On Her Majesty's Wizardly Service, by Diane Duane, both have cat protagonists. In fact, most of the characters are cats, and humans only appear in minor roles.

That photograph of Virginia Woolf reminded me of her 'Flush', which I wept over in my teens. It tells the story of Elizabeth Barrett-Browning from the point of view of her dog. Woolf presents it as 'A Biography' rather than fiction in a brilliantly tongue-in-cheek way - complete with 'Authorities'. Lovely endpapers by Vanessa Bell in the early Hogarth Press edition. Looking forward to hearing other suggestions...

Watership Down. And The Plague Dogs.

Oh, and The Last Family in England by Matt Haig is a very funny contemporary novel narrated by the family dog!

This is wonderful - some titles never come across, and some I'd forgotten. 'Watership Down' - of course! Even the thought of 'Bright Eyes' brings a lump to the throat :)

It's been so long since I've read "Winter's Tale" by Mark Helprin that I don't remember if the horse is the protagonist. Maybe.

Also "The Art of Racing in the Rain" was a bestseller here in the states a couple of hears ago. I thought it was kind of manipulative, but the POV character is a sweet dog so one doesn't mind too much.

Yes, I thought f Watership Down. To be honest, I read far more YA than adult, so there's not much off the top of my head...wasn't there one about Alexander's horse, Bucephalus? And in the only adult book I can remember by Rosemary Sutcliff, Arthur's horse Cygnus and hound Cabal are prominent. In my Bly novel so far, Wolfborn, a big soppy hound named Joyeuse plays a major role...but it's YA.

Whoops, my ONLY novel so far. And the Sutcliff book was Sword At Sunset, an adult book at the tail end of a series of children's books.

Do you allow Metamorphosis by Kafka? Man/beetle point of view and unforgettable!

Thanks, all - so great to see all these suggestions. And Kafka - why not?!

How about 'Faithful Ruslan' by Georgi Vladimov http://www.theguardian.com/books/2012/feb/19/faithful-ruslan-georgi-vladimov-review
not to mention Tolstoy's 'Kholstomer'? http://en.wikipedia.org/wiki/Kholstomer? In theory, the former is a critique of the Gulags and the Soviet system in general and the latter exposes serfdom (but in fact it contains much of Tolstoy's thought on everything).

Make Money Online Without any work, You can Invest as low as 1$ Dollar to 100$ Dollars and Get Daily profit of 2.50% for 90 Days.
Minimum Withdraw 1 and Instant Payout with PayPal, EgoPay and Perfect Money
Join Now
http://www.hotfxearnings.com/

Home Based Business Join Now without any Work
Earn 400% within a Month
Payout within 24 Hours with Perfect Money, OkPay and EgoPay
Join Now
Dollar-Inv.co