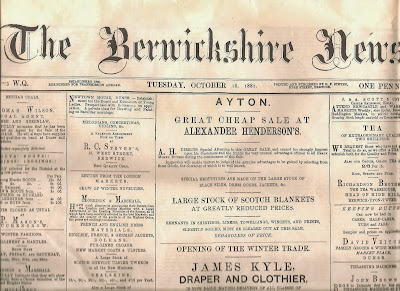 For years and years when I lived near Skipton, we used to take the local paper, The Craven Herald, which I believe was the last newspaper in England to cover the whole of the the front sheet in advertisements - for sheep sales, cattle sales, farmers' markets and local businesses. Sadly, no more. The last time I was up in Skipton and bought the the paper, I found it had at last conformed to the modern norm. The front page is now like every other: a news page with big headlines and photographs.

There was a certain charm in the old ways. The Craven Herald of only a very few years ago was little different from the one pictured above: The Berwickshire News of Tuesday, October 18, 1881 - full of small and large advertisements - for boot shops, milliners, coachmakers, coal agents; for hotelliers, gas-fitters and drapers.  W. Charles of Dunse 'begs to call particular attention to the WATERPROOF 'K' BOOT, as advertised in The Field newspaper' and 'ordered by the Admiralty for the ARTIC EXPEDITION' (sic: missing the 'c' out of 'Arctic' was clearly as easily done then as now.) An 'Establishment for the Board and Education of Young Ladies' offers its prospectus. John Brown calls attention to his Thrashing Machine: 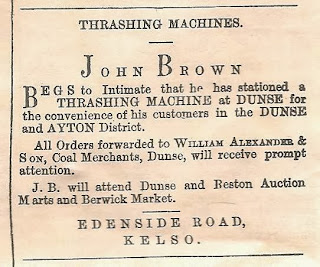 William Graham advertises a somewhat intimidating list of health drinks (what is Khiss Hi Ke Pani?) and follows it up with a variety of sheep-dips:

While, tucked away at the bottom of the page, is this modest advertisement for a monumental mason: 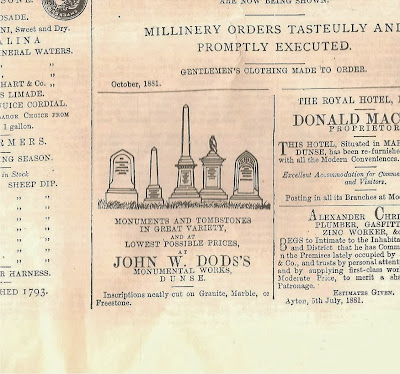 A lot of people may have been looking at this one.  Because almost the entirety of the inside of the newspaper - two whole sheets of closely printed columns - is taken up with the story of the 'Fearful Loss of Life' caused by the tremendous gale of October Friday 14 1881 - now known as the Eymouth Disaster after the tiny fishing village of Eyemouth which lost 129 of its men. In all, the gale cost the lives of 189 men,  but Eyemouth suffered worst. 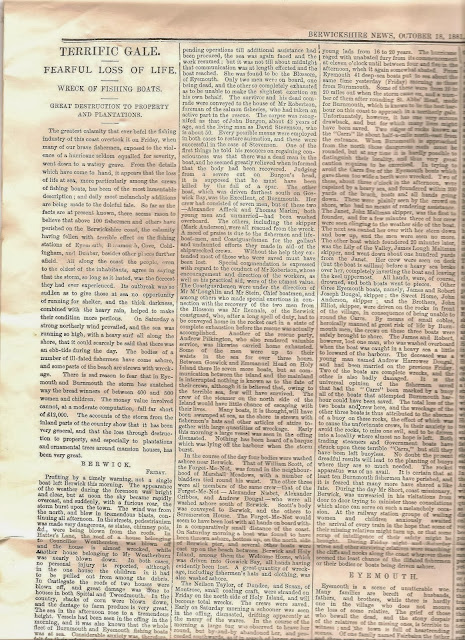 "Eyemouth" the reporter writes, "is a scene of unutterable woe. Many families are bereft of husbands, fathers and brothers, while there is hardly one in the village who does not mourn some relative. ...The town is full of heartrending scenes."

There follows a list of the lost, extremely touching even today, with the names of the boats in which they made a living:

All those from one little village - although, in those days of slow communications, the story is amended with a footnote to say "By telegram we learn that the Fisher Lasses has arrived at Shields with the loss of of one of the crew - Wm, Young - the rest are all safe."

Can you imagine with what anxiety this newspaper must have been perused on the day of its delivery?  So many locals lost: so many friends, family, acquaintances. The relief of learning that the Fisher Lasses was safe at Shields; the agony for the family of William Young, the ongoing agony for families who yet had no news. No helicopters then: no search and rescue.  Only the long wait. "Several bodies have come ashore at Berwick..."

How much attention, if any, was paid to the advertisments on the front page?

Well - life had to go on, even in the harshest and hardest of moments.  Here was a local newspaper, dealing with an immense but still local tragedy, doing its best to bring the news, to report the disaster, to mirror the grief and to relay the attempts being made to alleviate some at least of the suffering.. 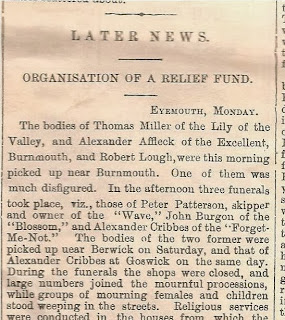 The Berwickshire News was serving its community, as local papers did then and still do today.

Credit:
All the newspaper excerpts are scanned from a facsimile of the Berwickshire News which I  bought from Eyemouth Museum - where much more can be found.

My parents lived just south of Berwick, so I knew Eyemouth and St Abbs well - the tragedy is still remembered and talk about. The sea there is so beautiful, but on a stormy day its power is terrifying. Thanks for sharing this story.

Thank you for showing the newspapers and reminding us that this was the only way, apart from word of mouth, that the tragedy was transmitted. How sad to read the list of the lost and the number of children they left behind, not just fatherless but probably also in a state of economic deprivation.

ps I'd give the sweet version of Khiss Hi Ke Pani a try.

Fascinating and sad. I'd never heard of the disaster though I did know about the Lynmouth flood disaster, having spent my honeymoon just outside Lynton and Lynmouth. That hymn 'Oh hear us when we cry to Thee/For those in peril on the sea,' rings in my ears as I read.

As far as the thrashing machine goes, it was, apparently the term, as well as threshing, and my grandmother-in-law's recipe book has a long list, to which I have referred in a post, of things to buy in when the 'Thrasher' came. It does sound rather dodgy though, doesn't it?