Ah, but when you write fiction things can be so convenient. As with the cinematic phone calls of yore, with dialling phones, where the beautiful actors only ever dialled three digits, because the full seven/ eight/nine digit numbers would take FOREVER and the audience would have fallen asleep, so we can if we choose gloss over the travel arrangements of our characters. Elizabeth Jane Howard famously observed that one has to get the numbers of the London busses right - no point saying that someone took a 31 to Harrods, when everyone knows the 31 goes from Chalk Farm to World's End, and not via Knightsbridge. Except - that it doesn't any more. The part that used to go from Notting Hill to Chelsea was renamed the 328, and then the 31 itself was extended from Notting Hill to Westfield at Shepherds Bush. No doubt the historical novelists of 1920, as they pored over ancient timetables and route maps, lamented in their turn the decline of the Horse Bus 36 (Finchley Road to Chelsea) which they had known by heart since their childhood days.

So what do we do? We can leave the bus number out, we can gloss over, or - if its that kind of book - we can use new-yet-historical forms of transport.

I'm sorry, EasytJet, but we will not be flying you. We will be flying - 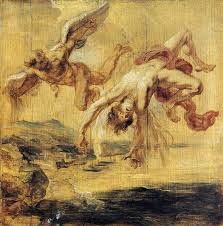 Flying squirrel? That could be good. A living breathing Flying Carpet. 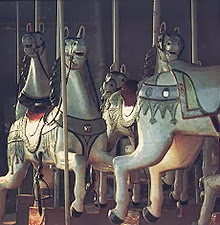 or -  a beautiful Lippizaner from the Spanish Riding School - we all know they can fly.

Certainly best to avoid a Threstal . . . the Ryanair of fictional modes of winged equine transport

No. For me, it's always back to the best, the bravest, the finest, the original.
Pegasus - take me away from all this - 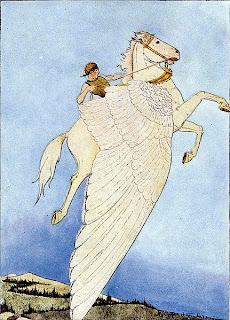 If I did have that pony, I wouldn't even need to ride him on a boat:
http://www.youtube.com/watch?v=4evzpIVnMVs

Wishing you all Bon Voyage in your seasonal movings around,
or, as they say in Ghana,
Travelling Mercies.
!

Lovely thoughts. Reminded me of my comment this week when I read of a Canadian cousin's preparations of Christmas food, "If only I had wings ..."

Aha! Good choices! (A pity that flying horse seems to be a one person vehicle.)