IF IT'S CHRISTMAS IT MUST BE CHINON... the festive season itinerary for Henry II 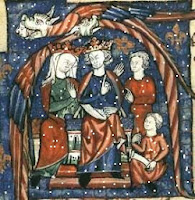 Medieval kings, especially Angevin ones were a busy,  peripatetic bunch.  If they stayed in the same place more than a week it was a miracle. The task of government in the Angevin period was a hands on one. The King had literally to be seen exerting his authority and the royal itinerary was one of pillar to post and back again across England, and vast swathes of what is now modern day France, not to mention Ireland.  Accommodation was generally the Medieval equivalent of a five star hotel, often with a splendid few days' hunting laid on for the benefit of the King and courtiers.  Much of the royal finery was carried in the baggage wains that lumbered to the same destinations as their sovereign, although frequently along different roads or earlier in the day.

I thought it might be interesting to look at where King Henry II spent the Christmas feasts of his reign from 1154 - 1188 (he died before Christmas 1189). Christmas gatherings were politically important events. While there was sport, mirth and merriment and largesse, it went hand in glove with meetings, with decisions of policy and government, with the declaration of interest and the issuing of charters.
As an aside with reference to the entertainments, we know that one Roland le Pettour held his estates in Norfolk for the performing of one particular festive jape for King Henry II.  His brief was to appear at court each Christmas and perform a 'leap, a whistle and a fart' for the royal entertainment. The particular service was hereditary and the responsibility was passed on to his son.  What can I say?  Having watched the inimitable Mrs Brown's Boys on television, not a lot changes!

To the itinerary:
Beginning in 1154:  Henry had been crowned King of England at Westminster Abbey on December 19th, aged just 21 years old.  Red-haired, freckled, grey-eyed and bursting with energy, this was the promising start to a magnificent new reign after a generation of bloody civil war.  Henry's wife, Alienor of Aquitaine was most probably crowned with him. She was 7 months pregnant with their second son, and their heir, William was two years old.
The Christmas celebration itself was held at the manor of Bermondsey across the river from the Tower of London.  Westminster royal Palace was not an option for the new king and queen. It had been neglected during the civil war and was something of a ruin.  Indeed, it was the first task of Henry II's newly appointed chancellor, Thomas Becket to put Westminster Palace in order and make it splendiferous.

1155.  Christmas was held at Westminster this time around, so presumably Becket had pulled out all the stops and made the place habitable for a gathering.  By January 1, Henry was busy in Canterbury.

1156.  No one is quite sure on this one, but Bordeaux is a likely candidate.  Certainly Henry was in his wife's lands rather than his own northern climes.  Sadly during this year he and Alienor had lost their firstborn son - cause unspecified. They had also had a daughter, christened Matilda after her formidable grandmother the Empress Matilda.

1157.  The King and Queen were at Lincoln this year.  In September Alienor had produced another son, Richard, later to become Richard the Lionheart.

1158. Cherbourg this year. Alienor had been in England until late in the year where she had given birth to yet another son, Geoffrey.

1159. The royal pair spent Christmas at Falaise in Normandy. Earlier in the year Henry had tried and failed to take Toulouse which Alienor claimed belonged to her. What the atmosphere was like at this gathering is anyone's guess.

1160. Henry and Alienor were at le Mans in Anjou this time.

1161.  Christmas was kept at Bayeux in Normandy this year.  In October, Alienor had given birth to her second daughter, also christened Alienor at Domfront.

1162. Henry and Alienor were intending to spend Christmas somewhere in England but because of bad weather in The Channel, had to keep the festival at Cherbourg.

1163. Christmas this year was at Berkhamstead and marks a sign of the growing discord between Henry II and his recent Archbishop, Thomas Becket.  The castle, although belonging to the Queen, had been loaned to Becket on a chummy personal basis.  Now, with the dispute over criminous clerks looming large, Henry made a point of taking Berkhamstead for his own use and ousting Becket.

1164. 1164 was another Christmas spend in England, at the royal castle of Marlborough in Wiltshire.

1165.  Henry and Alienor spent Christmas apart.  He was in Oxford busy with politics and she was in Angers in Anjou, perhaps still recovering from the birth of their third daughter Joanna. Was the marriage in trouble or was it just politics?  We just don't know, but it is more likely the former, even if trouble was looming.

1166. Another Christmas apart for the royal couple.  Henry was in Poitiers, the heart of Alienor's great Duchy of Aquitaine, and he was joined by his almost 11 year old son Prince Henry.  Alienor, meanwhile, was in Oxford giving birth to their last child, John.

1167. This particular year the royal couple managed to have a family Christmas at Argentan, although some sources say Rouen. 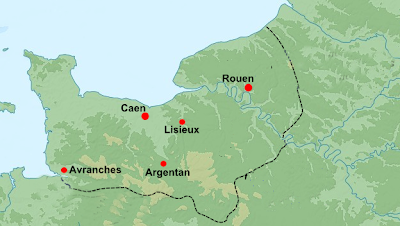 1168. The Christmas court this year was definitely at Argentan and Henry was still there at New Year.

1169.  This year Henry was at Nantes in Brittany for Christmas with his third son Geoffrey who was Count designate of Brittany.  This was definitely politics. Queen Alienor inthe meantime was keeping her own court and Christmas in Poitiers.  Many historians and novelists see this period as the time of the split between Henry and Alienor, with her returning to her Duchy and occupying herself with her own concerns.  There is the suggestion (rather fanciful) that Henry had taken up with a nubile young mistress, Rosamund de Clifford and that Alienor had gone off in a jealous snit, but given Alienor's political acumen, it's not a likely scenario, even if it is soap-operishly romantic and dramatic.

1170.  Henry and possibly Alienor were at Bures for Christmas not far from Bayeux.  It's from Bures, supposedly on misunderstanding Henry's orders, that the four household knights set out to cross The Channel and murder Thomas Becket on the steps of Canterbury Cathedral  on December 29th.

1171.   Henry spent Christmas 1171 in Dublin, sorting out the Irish and keeping away from all the furore over Becket's slaughter. Alienor was probably in Poitiers.

1173.  King Henry was in Caen. During the last year his sons Henry, Geoffrey and Richard had rebelled against him, as had their mother and he was still busy dealing with uprisings and insurrection.  His sons were still rioting but he had captured Alienor and imprisoned her. She spent Christmas at his pleasure, but we don't know where, although Chinon and Falaise are both likely.

1174.  Henry spent Christmas at Argentan.  Alienor, now a permanent prisoner for the rest of his reign, was confined to various fortresses in the south of England, predominately Old Sarum and Winchester.

1175. Henry was at Windsor with his eldest son Henry, now reconciled.

1176.   Henry spent Christmas at Nottingham with his two youngest sons Geoffrey and John. His oldest son Henry was at Argentan with his wife, daughter of Louis VIII, and Richard was at Bordeaux.

1178  Henry kept Christmas at Winchester with his sons Geoffrey and John. There is no mention of Alienor being there, but she may have been.

1179  The venue for Christmas this year was Nottingham for the second time.

1180  This time the King was back across The Channel at Le Mans.

1183 Henry spent Christmas at Le Mans and Prince John now 17 was with him.  Henry's eldest son, Henry had died in rebellion against him in the summer of that year.

1184  This was a big family gathering year. Christmas was spent at Windsor with Alienor joining the court, together with her sons Richard and John, her daughter Matilda who was now Duchess of Saxony with her husband and their children.

1188  Henry spent the last Christmas of his life at Saumur in Anjou. 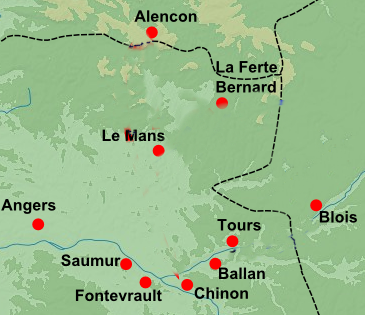 So in his 35 year reign, Henry II spent 12 Christmases in England,  2 in Aquitaine,  12 in Normandy, 1 in Ireland, 1 in Brittany and 6 in Anjou. All travel courtesy of horse, wagon, and occasionally Shanks' pony.

A Happy Christmas/festival/holiday break to all wherever you happen to be!

Brilliant! What a fantastic resource for my imagination.

shared this one right away...who doesn't want to know how kings did this season. Trust a history girl to get the facts out and make them tasty. Best to you and yours and all the History Girls!

Thanks for an interesting and informative post. It's amazing how he got to so many places. As you say it is indicative of what he needed to do.

Henry certainly got around!

Merry Christmas to all the History Girls, and thanks for the lovely seasonal post.

My goodness, they certainly got about!
Liz

Fascinating post, Elizabeth. Festive joy to you in your current Christmas location!

Sorry to remember he spent his last Christmas in Saumur - another beautiful castle and well worth a visit now they've done the refurbishment.

Thank you for this and Merry Christmas!

Such a restless lot! Thanks for such glimpses into all Henry's royal Christmasses, Elizabeth. Makes me glad just to be at home and - musing on the constant fighting - have a home to be in.

Thank you! Fascinating-I’d love to travel to all of these and imagine them being there-though not in chronological order as that would be a crazy amount of crisis crossing!