One of the speakers I was longing to hear at HARROGATE HISTORY FESTIVAL was author LINDSEY DAVIS. Best known her historical whodunnit series about Marcus Didius Falco, she could not ignore her well-loved hero, but she introduced some other of her titles too. 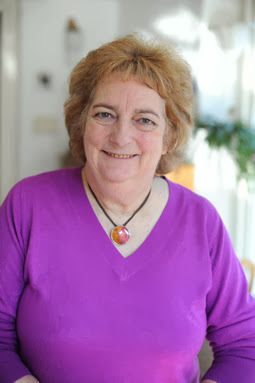 Like others at this festival, Lindsey Davis credited Rosemary Sutcliff’s books for inspiring her love of history and writing.  However, in 1989, when she started on her series, she was the only author in England writing about the Romans. Now she knows of thirty-five people who are, today, "writing in the Roman era.”

Lindsey Davis worked as a civil servant for thirteen years, and suggested that it is good for writers to have a career first. Often those hailed as writers at twenty give up by the time they reached thirty five. Her first success was a romantic novel that, to her surprise, was a runner-up for the 1985 Georgette Heyer Historical Novel prize.

Having attended, she said, the kind of school that taught her to be a good hard-working girl, Lindsey Davis decided that she would set herself to write a book a year, and to write the kind of book that nobody else was doing. After finishing her first Roman book, THE COURSE OF HONOUR, about Vespasian and his lover Antonia Caenis, she discovered that editors were unwilling to publish it, saying “The Romans were too hard”. The book was not published for another ten years, but she still believes it was her best book.

Just as importantly, this was the work where she found her writing voice.  She always felt that “Vespasian was a good story” but it was published on the worst day of the year, the second of January, the day where books are buried. Then, needing to find something fast to write about, Lindsey Davis re-used her “Roman background” research, and, as an echo of the world-weary detectives on the radio, she found Falco’s distinctive, first person voice. 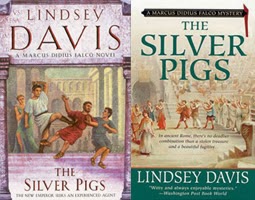 She was pleased when THE SILVER PIGS - the first Falco story - was praised for its historical accuracy. Back then she knew no academics. nor could she afford to take public transport to study at a library, so most of her research was from titles found cheaply in second-hand bookshops.

Lindsey Davis said that she enjoys writing because “you can start off without knowing anything at all about the story”. Those crime serials on the radio had made her fond of baddies and heroes like Philip Marlowe. All she knew when she began was that Falco “was a gumshoe who stops being a gum shoe”. She did the wrong things too: she had no “body” until a third of the way through the plot and she killed off the blonde. By LAST ACT IN PALMYRA, Falco’s character has developed and he is no longer a cheap tec, but has become a spy.

Although the Romans are known for their many gods, she views religion as a fourth generation atheist, and felt that religious practice was, to Falco, mostly a social duty.

Another advantage of the series, Lindsey Davis found, was that she could go on holiday to interesting places for research. Visiting Italy, she observed that what was important to Italians was “family”, so as the books grew, so did the Falco family, friends and relations until she decided the series was a kind of “The Roman Archers”. She based Falco’s mum, who appears in Book Two, loosely on her own mother but said that she got to know all the rest of the family by “colouring them in as I went along”. She explained that the bankers and publishers were often the bad guys. In fact, in that era, a publisher would be a banker, and Falco himself would need the complication of patronage.

The early book was influenced by the fashion for “makeovers” on television, and the archaeological discoveries on and around the site of Fishbourne Roman Palace in Sussex, which Vespasian had probably visited.

Lindsey Davis’s training in the Ministry of Works helped her spot some likely corruption. The small Roman villa down the coast is made of exactly the same materials so perhaps the project manager was creaming off the stock for his own uses?

This observation might not be true but, as she said so inspiringly, “we can write the possible”. 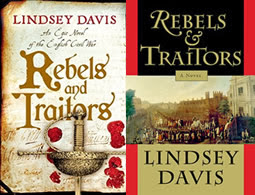 The Romans, however, are not "her" period. That is the English Civil War, whose history she followed for her novel: ”REBELS & TRAITORS”.

Lindsey Davis’s family comes from Birmingham, where swords were made for the Parliamentarians so you can tell her view of the Royalists.

Again, publishers told her “you can’t sell a story based in Birmingham” to which she replied, “But you can sell a story with rape, pillage and murder”, all though she also added that it was just a love story between two people form different traditions. 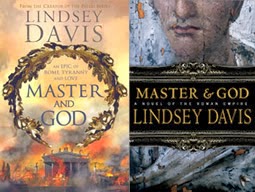 Lindsey Davis seemed to have found “MASTER AND GOD” a tough novel to write.

(At this point, my friend whispered in my ear that it was a terrific book and how cross she was that she'd lost her copy. Now she just has an e-book version. Me, I bought the book!)

The Emperor Domitian is, Lindsey Davis said, so horrible that she had to put in other characters that she could enjoy writing. He is  not some kind of “joke god”, but an obsessive man dangerously full of paranoia. She said that he was understandable once she saw Domitian as the child born and treated as the “spare” heir, at a time when that would make him very vulnerable, even to members of his own family.

Despite the requests, Lindsey Davis felt that she had written all she could about Falco. He had reached the end of his story and got what he had always needed: money to look after his family, and the uncomfortable burdens that brings. Falco had, she said, become “a pinko liberal who can’t relate to having slaves.”

So, finally, Lindsey Davis spoke of her newest character, FLAVIA ALBA, who is both Falco’s adopted, British born daughter, and a female investigator, and who appears in THE IDES OF APRIL, a spin-off series.

Lindsey Davis warned fans that this new series had only the faintest links to Falco. This is Flavia’s book and readers must not expect to find themselves in a Falco story. Flavia has her own set of skills, and as a woman, she has the advantage of being able to enter places where Falco could not. And more besides, I'd imagine.

Besides, in a rather nice twist, Flavia Alba doesn't live in Falco’s villa. Lindsey Davis has settled her in the disreputable Fountains Court, where Falco lived so many years before. If it has anything like the charm of Falco, this will be a treat indeed, and the season of special book gifts has arrived. 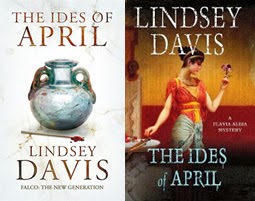 Moreover, Lindsey Davis is very proud of the short chapters in THE IDES OF APRIL, especially the chapter that is just one word long: “OUCH!”

One day, she wants to write a chapter that is just punctuation. Will that chapter be in the sequel, ENEMIES AT DAWN, I wonder?

SO, FLAVIA ALBA,
WE WHO ARE ABOUT TO READ,
SALUTE YOU! 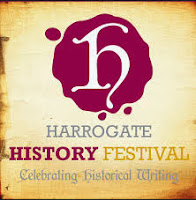 Thank you for your talk, Lindsay Davis, and I hope that these notes on your session at the Harrogate History Festival ring true, and apologies for any errors or omissions.

Lucky you! Thanks for sharing this with us. I love the Falco novels, which really make me feel as if I'm in Ancient Rome, their whimsy and laugh-out-loud humour and the times she plays around with pastiche, such as the scene where Falco does an Agatha Christie Poirot scene where he gathers all the suspects in the living room and talks out his suspicions. I haven't finished the series yet, but sooner or later Pompeii oud be wiped out, Vespasian would die, Titus would die and we'd be in the reign of Domitian, no fun at all! I must check out the spinoff!

Thank you, Penny. I love the idea of Roman Archers. And it is true about the Italians valuing family above everything. And like all their values and built environment, it makes sense that this modus vivendi had its roots in the Roman era.

As a former civil servant (though I only stuck it three years) I'm delighted to think that profession provides a good background for a writing career! A fascinating article.

Thank you for reporting on this - what an interesting talk!

Her"Ministry of Works" background made me smile because before I'd read her first Falco book, way back when,I'd thought of Rome as orderly and "classical", as taught at school. LD's descriptions of a ramshackle, jerry-built Rome with the dubious landlords, landowners, tenants and people good & bad just trying to get by, gave me a whole new view of Rome! I have decided that next year will be my re-reading of Falco year, but I have Reels & Traitors on my Christmas list. (Oh, and a generous book token to spend.)

Oh dear, I have something coming out on 2nd January, and was pleased about it till you said that!

Excellent report, Penny, and I shall now be seeking out Rebels and Traitors and The Course of Honour. I like the sound of those.

Would just like to say that my remark about 2nd January relates to the blog and not Penny's comment!

Ann, the 2nd Jan date was (slightly) in the past, not in our current, logical and global publishing climate. :-)

Good luck with your new title!

Also, Sue B, re Vesuvius, LD said that she was often asked about Vesuvius, but felt that it was not suitable for a "romp".

Romp, I suppose, being a clue - see her "Roman Archers" comment above - as to how she sees her Falco series & her writing style within.

Really interesting. I do like the sound of the female Roman detective - must look out for this. Your report is full of information about L Davis which I did not know, having only heard of her as the author of Falco.

Sensibilia, the character of Flavia intrigues me too. There's some of this information on her website, but it was wonderful to hear her talking. I've also heard that the Falco series have become good audio books.

Now I really must stop advertising my admiration for LD and that History Festival. And before anyone asks, this is all my own free opinion and nowt I'm being paid or otherwise rewarded to write. :-)