'Tis the year's midnight, and it is the day's,
Lucy's, who scarce seven hours herself unmasks;
The sun is spent, and now his flasks
Send forth light squibs, no constant rays;
The world's whole sap is sunk;…


Here’s the blogpost equivalent of a little nosegay: a beautiful painting, a rich and melancholy poem, and the moment of the year’s deepest darkness …which is precisely where (of course) we find the light.

St Lucy’s day – which falls tomorrow – was for generations considered the shortest day of the year. It may well indeed have been just that, before the Gregorian calendar was introduced (though there are various arguments about the precise dating of the winter solstice in different centuries, which I won’t go into here). For Donne, certainly, this was the “deep midnight” of the year.

No wonder, then, that Saint Lucy – or Lucia – whose name derives from the Latin word lux (gen. lucis), meaning "light", brings light into the darkness. In Sweden, her day is a festival of light, involving the wearing of headgear that would fall foul of many a healthy and safety regulation.

According to The Golden Legend, Saint Lucia lived in Syracuse, Sicily, sometime in the earliest years of the 4th century AD. She refused to marry, and instead gave her dowry away to the poor. Her spurned bridegroom, however, accused her of being a Christian and a lawbreaker and had her dragged before the consul. Lucia answered the consul’s accusations and threats robustly – “Do what you think best for yourself, and I will do what I think best for me” – and, with divine help, withstood attempts to drag her (using oxen) to a brothel, to burn her alive and to kill her with boiling oil. She even managed to go on speaking after a dagger had been plunged into her throat, and only gave up the ghost, finally, once priests had brought her the eucharist.


In the Swedish festival, the young woman representing Lucia wears ‘light in her hair’, plus a pure white robe and a red sash, signifying the virgin saint’s martyrdom. But as so often with Church festivals, this Christian tradition is mixed with something less straightforwardly holy. According to the website http://sweden.se (“the official site of Sweden”) -

The Lucia tradition can be traced back both to St Lucia of Syracuse… and to the Swedish legend of Lucia as Adam’s first wife. It is said that she consorted with the Devil and that her children were invisible infernals. Thus the name may be associated with both lux (light) and Lucifer (Satan), and its origins are difficult to determine. The present custom appears to be a blend of traditions.

In the old almanac, Lucia Night was the longest of the year. It was a dangerous night when supernatural beings were abroad and all animals could speak. By morning, the livestock needed extra feed. People, too, needed extra nourishment and were urged to eat seven or nine hearty breakfasts. This kind of feasting presaged the Christmas fast, which began on Lucia Day.

Talking animals are clearly a feature of noteworthy winter nights; in England, tradition has it that they acquire the power of speech on Christmas Eve night. However, I must advise against creeping up on the cat- or dog-basket (or hamster cage) to put this to the test, as it’s supposed to be bad luck to eavesdrop on these once-a-year conversations. The foolhardy types in folk tales who try it usually hear a foretelling of their own imminent death, though in The Tailor of Gloucester Beatrix Potter softens the tradition – Lilac-Fairy-like – to make it simply an auditory problem:

…it is in the old story that all the beasts can talk, in the night between Christmas Eve and Christmas Day in the morning (though there are very few folk that can hear them, or know what it is they say).

And it’s not only talking that goes on: at the stroke of midnight, when Christmas Eve becomes Christmas Day, cattle are said to kneel spontaneously. In The English Year: A month-by-month guide to the nation’s customs and festivals, from May Day to Mischief Night, Steve Roud tells us that this idea was well established from at least the 18th century, and quotes an account that appeared in the 1849 edition of John Brand’s Observations on the Popular Antiquities of Great Britain:

An honest countryman, living on the edge of St Stephen’s Down, near Launceston, Cornwall, informed me, October 28th, 1790, that he once, with some others, made trial of the truth of the above, and watching several oxen in their stalls… at twelve o’clock at night, they observed the two oldest oxen only fall on their knees, and as he expressed it, in the idiom of the country, make ‘a cruel moan like Christian creatures’. I could not but with great difficulty keep my countenance: he saw this, and seemed angry that I gave so little credit to his tale, and walking off in a pettish humour seemed to ‘marvel at my unbelief.’


Scoffing antiquarians were no doubt bad enough, but Roud points out that this belief in animals’ miraculous awareness of the date at Christmas was put under yet more strain by the change from the Julian to the Gregorian calendar (which happened in England in 1752). Had anyone informed the animals of the new system? In 1847, Bentley’s Magazine reported a rather neat solution:

It is said, as the morning of the day on which Christ was born, the cattle in the stalls kneel down; and I have heard it confidently asserted that, when the new style came in, the younger cattle only knelt on December 25, while the older bullocks preserved their genuflections for Old Christmas Day, January 6.
[quoted in The English Year by Steve Roud, p.503]

But let’s return to Saint Lucia. You’ll notice that as well as her palm branch, which she carries as a symbol of martyrdom (representing the victory of the spirit over the flesh), she is often depicted carrying eyes on a plate or cup (or, as in the del Cossa picture at the start of this post, on a rather elegant stalk).


There is no mention of eyes in The Golden Legend – which was written in the 13th century – but two centuries later, gouging had begun to feature in Lucia’s tale, either inflicted on the orders of the bloodthirsty consul, or by Lucia herself, in response to a suitor’s admiration. In some versions of Lucia’s story, her eyes are discovered to have been miraculously restored when her corpse is being prepared for burial.

Light and sight go together, of course – perhaps it was because of this association that eyes became a feature of Lucia's legend, and she herself began to be venerated as the protector of sight.

My fellow History Girl Michelle Lovric, an expert in all things Venetian, tells me that Saint Lucia’s body is in Venice, having been sent there by the blind Doge Enrico Dandolo after he looted Constantinople in 1204. Today Lucia’s mummified body lies in state, her face covered by a silver mask. There used to be a little box, Michelle says, in the Church of Santa Lucia where people could throw the spectacles they no longer needed because of Lucia's miraculous interventions.

Well, I won't be chucking out my spectacles just yet, but I do wish one and all a light-filled Saint Lucia's Day tomorrow. 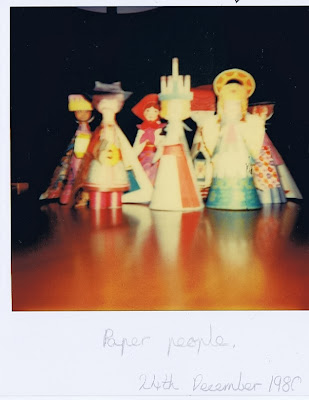 Finally, a personal postscript. I took this photo in December 1980, when I was ten. I had a Polaroid instant camera (the joys of which are hard to explain to children raised in the digital age) and I spent many happy hours taking blurred, bad photos with it.

Despite the obvious aesthetic drawbacks of this one, I’m so glad I took it. The paper figures shown have become very precious in my memory, both because I loved making them, and because I loved the finished figures themselves.

During Advent that year, a relative had sent my siblings and me a book of paper figures to make – Christmas figures from around the world. There was a Santa Claus, a Baboushka, a Saint Nicholas in full bishop’s regalia, a smattering of wise men, and various other figures that fulfil (or so the book told us) the present-giving role in different countries: a witch, a gnome-type chap with a lantern, a shepherd, and so on. The figures came complete with names and stories, and the whole thing fascinated me.

And one of the figures, as you can see from the photo, was the Swedish version of Saint Lucia. It was my first meeting with her – and always, still, I associate her with this beautiful set of paper figures, which I loved so much.

Despite numerous searches on the internet and in the shops, I have never seen anything like them in all the years since. If anyone else ever has, please do let me know; I would be more grateful than I can say.

H.M. Castor's novel VIII - a new take on the life of Henry VIII, for teenagers and adults - is published in the U.K. by Templar, in the U.S. by Simon & Schuster, in Australia by Penguin, and in France by Hachette.

I love the traditions. Growing up in America we didn't get talking animals or kneeling ones that I know of. But my dearly departed dog really did speak English. Or at least he understood it.

Um. Peering hard. Yes, I do remember that book! (I may even have the remnants of the pages stashed away somewhere, though where, heaven knows.) The figures were just right - the quietly charming side of folksy without being twee, with something "European" in the design - and the range of stories and legends was unusually good. Glad that the figures brought you such delight.

I am sure I have that book, I too made them in the late 70's and loved the crown of light, as well as babushkas colours! but I found a copy of the book in a second hand shop in the nineties, I will need to hunt it out and get the details for you:-)if I a right they hadn't even made the figures the book was immaculate! of course 4 cats and 3 children later I do hope I put the book away!

Fascinating post, Harriet. I love Carl Larsson's pictures of his family celebrating Saint Lucia's day & Christmas and it's good to know the background. Also, I might just sneak a look in the stable that's near to us to see what the horses are up to at midnight on Christmas Eve!

Thank you all! Yes, I love Carl Larsson's pictures too, Mark. And Ruan - that is immensely kind. It's lovely to hear from you & Penny that you recognise the figures. And Petrea, your much-missed dog sounds absolutely lovely.