Recently I’ve been engaged in some banter on Twitter with @KatharineEdgar about modern Nativity Plays in schools. We were commiserating re the number we had to sit through and exchanging views on modern interpretations of the Age-Old Story.

All of which led me to think about Nativity Tableaux of Christmas Past and Christmas Present.

Every year, on Christmas Eve, my parents would bring out the battered biscuit-tin box containing the family Crib set. I and my siblings were allowed, very carefully, to unwrap the ceramic figures of Mary, Joseph, Shepherds, the Kings in richly coloured garments, ox, ass, and Baby Jesus lying in his manger bed. Under some supervision (?) we’d hammer together a rough shelter for the figures - I do actually recall handling a chisel when I was about seven years old, Health & Safety be danged! - and spread straw liberally about.

After that was done, and the Crib was set up on a side table by the fire, the Big Deal was: Who got to put Which figures Where…

There was intense rivalry for Mary and Joseph and normally these were allocated to the Two Bossy Big Sisters. I’d usually kick up a fuss about this. I didn’t particularly want to take charge of Mary and Joseph but felt obliged to make a token gesture of objecting, in the hope that I could earn an extra biscuit before bed in compensation. Then it was the turn of middle sister and older brother. I waited. With the major characters allocated I knew that I could get the one I secretly wanted. My favourite was the young shepherd wearing a rough coat of sheepskin with a flute held to his lips. I always chose him, this unnamed shepherd. I think it was because he was different. I’d place him on the side at the back to play his music, and imagine how the notes might sound as he watched his sheep on the hillside at night near Bethlehem two thousand years ago

I have a vague recollection of, at one time, being allowed to position the very last figure to go in - the Baby Jesus. This was the privilege accorded to the youngest in the family. My little sister arriving five years after me usurped my role. I will admit to pangs of jealousy when no other child came after her and so she held that post for all of our childhood.
Of course, as soon as she had turned her back I rearranged the baby into what I considered a more appropriate position. 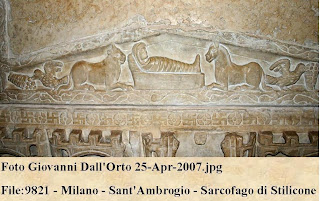 It seems that the oldest known picture of what might be termed a Nativity Scene was found on the walls of the catacombs of Rome.

Another very old example is the wonderfully simple depiction on a 4th century sarcophagus in Milan as seen here.

The tradition that is followed now is less ancient than those. St Francis of Assisi is credited with creating the first representation of the stable and the manger about a thousand years ago. To inspire spirituality he arranged a living nativity scene with real people and animals in a in a cave near the Italian village of Greccio. Not too long after this Arnolfo di Cambrio made the first set of Crib figures which can still be seen in the church of St Mary Major in Rome. 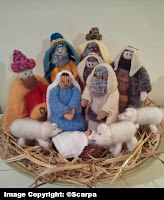 Styles changed to become elaborate and ornate but in recent years have become more simple again.

I love this hand-knitted version a friend of mine has so that her children can rearrange the figures without any damage being done.
My own family Crib set is very plain. 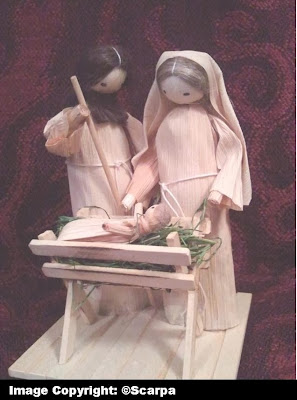 Through the years I’ve experienced many living Christmas Nativities of great variety. I’ve watched it told from the Point Of View of the Sheep, Donkey, Innkeeper, Innkeeper’s Wife, Wise Man, the Star etc. You name it. I’ve seen it. This year the Aliens were a startling innovation, but Baby Jesus didn’t look too fazed as he was plonked down in the middle of a stage full of spacemen and green-faced creatures from the Planet Zog.

When my parents died the family agreed that my youngest sister should have the Christmas Crib set and every December she puts it out. The paint is faded and the figures are chipped with pieces knocked off, but they seem to radiate the love and affection of yesteryears . 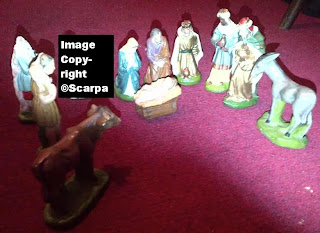 And yes, occasionally, over the Festive Season, when there’s no one about I do find my fingers wandering to rearrange the Baby Jesus in his manger bed.

Happy Christmas one and all!

Our tradition is for the crib to be empty until Christmas Eve and the Magi positioned afar, at the end of the piano. But we now have an anally retentive grandchild who 'finds' the Baby Jesus and then rearranges all the figures in a ruler-straight line.

Laurie, loved your comment - and who knows? It might have been a long and very narrow stable. Thanks for bringing us the story of cribs , especially your family crib, Theresa.

There's a history within the old and sometimes battered family decorations that isn't there in the "this year's brand new colour scheme" approach.


I'm in sympathy with your grandchild Laurie. I remember I had to make sure Baby Jesus was directly in Mary and Joseph's sight lines. As Mary's head was bent this required a lot of skill on my part. I was comforted in my neurosis when I grew up and saw that famous analysis of da Vinci's Last Supper where the lines to each Apostle radiate from Christ's left eye! Happy Christmas

Why not a long and very narrow Stable indeed? I agree re the history of family decorations Penny. When dressing our tree there's a 'story' to always every ornament we put on. Happy Christmas!

What a lovely post, Theresa! Love the photo of 'your' crib!


Thanks Adèle - we bought years ago in Prague.

Thank you for sharing this - warm and real!


Glad you liked it Joan. Happy Christmas to you and yours!