One of the delights of 2014 was my Heart of England Co-operative Society Calendar. 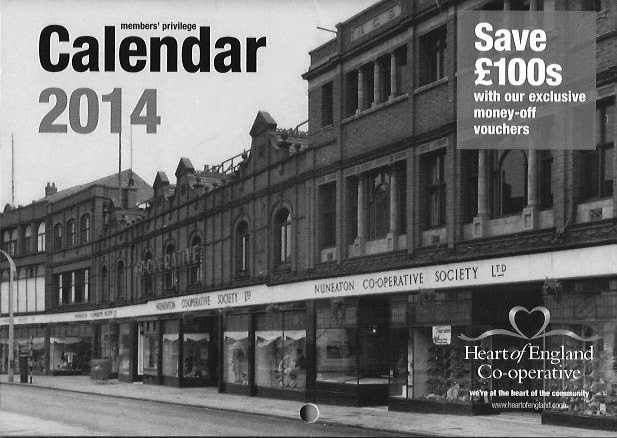 I'm not quite sure why I was sent it, I must have joined on purchasing some item from the local co-op, but I found it fascinating, not only as a time machine taking me back to my childhood, but as a record of how shopping has changed over the last fifty years.

The Cooperative movement generally traces its origins to the Rochdale Pioneers Society  established in 1844 and based on the 'Rochdale rules', which included: 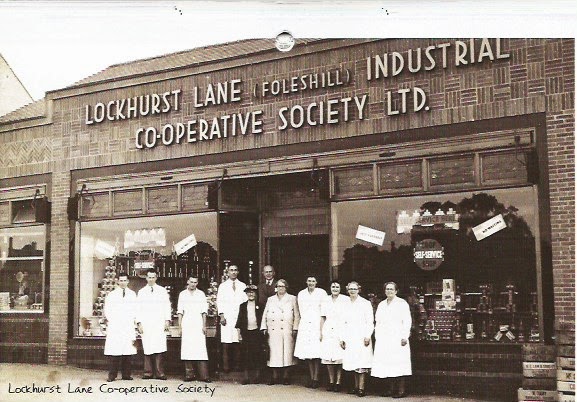 Co-operative Societies grew into existence in order to give ordinary working people access to affordable and reliable goods and services, not just food stuffs, but clothing, insurance and funeral services. 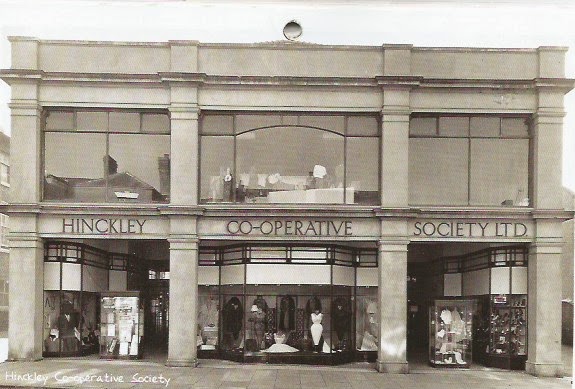 One of the most important benefits that they offered was the 'divi', a share of profits according to purchases made. Most people of a certain age remember their co-op number - 1786 - since you are asking. It was the first number I memorised and I remember being sent with list and shopping bag up to the Co-op, reciting the number to myself as I went (kids were sent out on errands on their own back then - it was a different world). For my family, the 'divi' was a treat, cashed in and spent at Christmas but for many families it was a lifeline, a vital source of extra money to extend over stretched family budgets or to meet the unexpected, extra expenses, like grammar school uniforms, that without the 'divi' would not have been met. 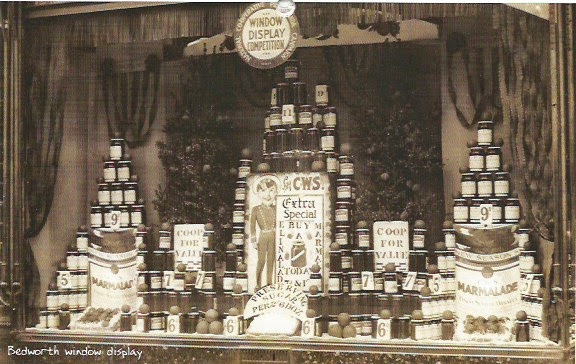 I can just about remember the Co-op Grocery with white coated assistants behind counters weighing and wrapping and windows rather like this wonderful Marmalade display from the Bedworth Co-op but even when I was a child retailing was changing. On our High Streets, the butcher, the baker, the greengrocer and the fishmonger cling on but the grocer has gone, replaced by the supermarket. The change is graphically depicted in the calendar. This early example shows what is almost a hybrid shop, with open shelving but the walls still stocked high, a white coated assistant standing by and a notice to instruct the public on to how to go about this new style of shopping: 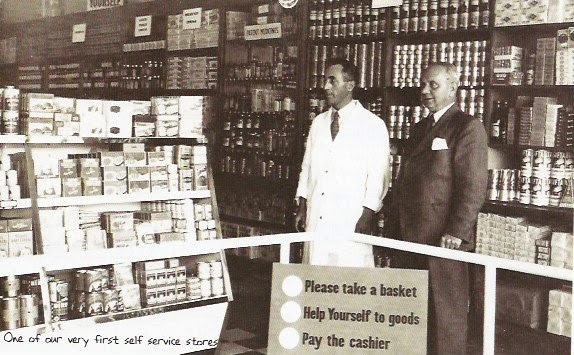 A few years later we have what is much more recognisable as a supermarket, although the white coats are still in evidence and shoppers are still being reminded to take a basket. 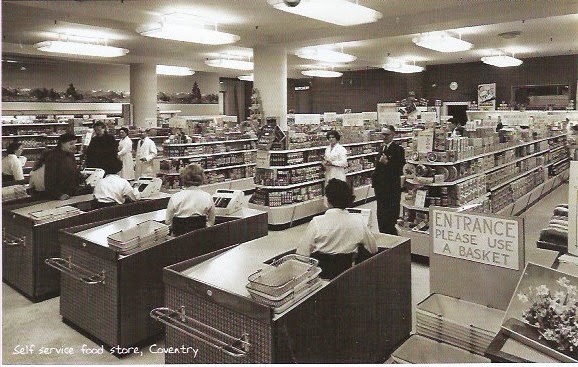 Whatever we might think of supermarkets now, they had yet to be seen as a Bad Thing. They were beacons of modernity and Openings were often greeted with much excitement, as evidenced by this scene with everyone from old ladies with dogs to boys on bicycles present at the opening of the Southam Co-operative Store. 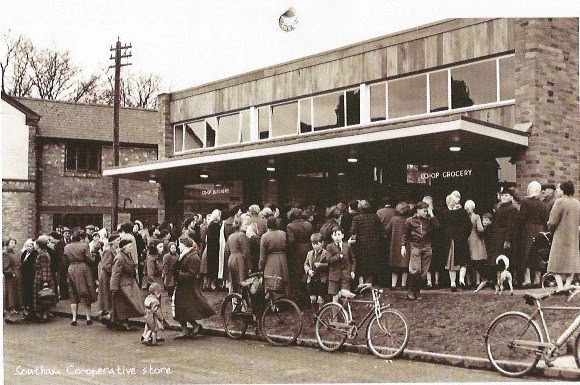 The picture for October was one of my favourites. 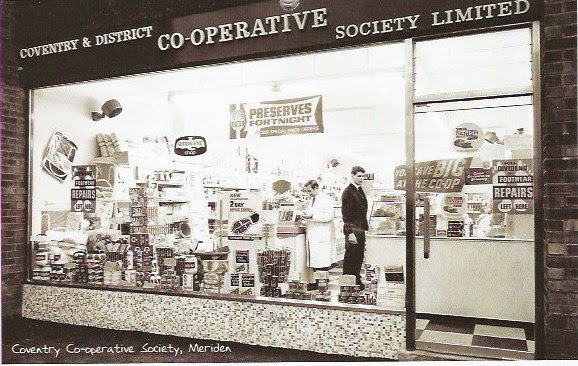 I particularly love the Hopper-like quality but also relish the brands on display in the window: Tide, Horlicks, Crysella Soap Flakes, Birds Eye, Quaker Oats and Daz washing powder. These photographs perfectly capture a place, a time, the local co-op as an everyday part of ordinary lives.

(All photographs taken from Heart of England Co-operative Calendar, 2014)

Lovely post. I have to say, though, I like big anonymous supermarkets. My memories of little local shops are not all that great.

Fabulous post, Celia. Part of the tapestry of twentieth-entury England. I don't think there was a co-op store near us. I was never given a number to memorise or shop with… after reading this, I feel as if I missed out on a slice of life.

Loved reading this. We even had co-op stamps in Botswana in the early 70s - I loved being allowed to lick and stick them in the book.

I know what you mean about the supermarket, Sue. It's all very well being nostalgic but we forget the time it took and the lack of choice. I will treasure my calendar, though.

Loved this - and the Co-op was so important, politically, an example of how grass-roots activity did change things. I too had Co-op stamps in the late '70s - nowadays I shop at Waitrose, a smallish local one, which manages to be both a supermarket and friendly, so I guess I get the best of both worlds. And talking of quietly revolutionary institutions,the John Lewis partnership is surely an instance of Kropotkinite anarchism?

My name is Crysella, I was born in 1954 and I was named after Crysella soap flakes. I can't forget the co-op! :)