A Blustery Obsession by Julie Summers 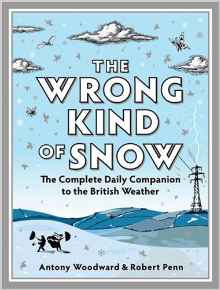 Like many of my fellow countrymen and women, I am fixated by the weather. The shipping forecast can fill me with overwhelming excitement when there are gales in all areas. The poetry of the Beaufort Scale and the thought of rugged Rockall, stuck out in the Atlantic, battered by storms nearly all year round, seems to me a perfectly beautiful juxtaposition of nature versus man. So you can imagine my delight when I chanced upon a brilliant book entitled The Wrong Kind of Snow. Published in 2007, it is written by two weather enthusiasts who are anything but armchair boffins. Robert Penn developed his passion for the weather while riding a bicycle around the world and Antony Woodward was born in the back of a Landrover in the middle of a snowdrift in 1963, a notoriously hard winter, he adds. I know. I remember it. My mother had a car crash just up the road from my grandparents’ house and it made a very big impression on me, aged 3. I recall the car skidding on the ice and careering into a car coming up the hill in the opposite direction. It was my first memory of a drama and it was caused by the weather.

Penn and Woodward’s study covers every type of weather event and describes the British Isles as the most weather-affected place on earth. I was not sure I was ready to believe that until I plunged deeper into this fascinating book, which gives a daily account of the weather, drawing statistics from the last three hundred years and anecdotes from the last two thousand. Given the unseasonally warm, damp British December of 2015 and early January 2016, I was amused to read that Sydney Smith, a nineteenth century clergyman, complained on 7 January 1832: ‘We have had the mildest weather possible. A great part of the vegetable world is deceived and beginning to blossom, not merely foolish young plants without experience, but old plants that have been deceived before by premature springs; and for such, one has no pity.’
I too felt bewilderment and little sympathy that daffodils were flowering in late December. Yet on that same date, in 1982, the temperature recorded in Braemar in Scotland was -22.6C. Extremes of weather indeed.

Unable to resist a childish urge to see what happened on my birthday, I looked up 3 October and was not disappointed. ‘After weeks of storms and heavy seas in the Channel, a far southerly wind carries the massive invasion fleet of William, Duke of Normandy, to England in 1066. He lands at Pevensey completely unopposed.’ Why unopposed? Because King Harold had concluded that the long delay and roaring northerly gales had put William off and the invasion would be postponed until the spring. How wrong he was, and how extraordinary to think that 1066 might never have happened, or even become 1067.

The weather is the backdrop to our lives, affecting everything we do and often the way we feel. A wash-out in June can pour misery onto a barbecue party while a bright crisp day in October can lift the spirits for me in a way that no spring day can. I am frequently struck by how much weather is used both in fiction and non-fiction. Indisputably one of the most famous weather events launches Bleak House: ‘Fog everywhere. Fog up the river, where it flows among green aits and meadows; fog down the river, where it rolls deified among the tiers of shipping and the waterside pollutions of a great (and dirty) city. Fog on the Essex marshes, fog on the Kentish heights. . .’ and so on. Such a brilliant evocation of the literal and literary meaning of fog. Many authors of fiction, historical or contemporary, use the weather to describe moods, feelings and portents. In Wuthering Heights a powerful storm strikes on the night that Heathcliff runs away: ‘…the storm came rattling over the Heights in full fury. There was a violent wind, as well as thunder, and either one or the other split a tree off at the corner of the building: a huge bough fell across the roof, and knocked down a portion of the east chimney-stack, sending a clatter of stones and soot into the kitchen-fire.’

But what of the non-fiction writers? The weather has an impact on events for us too and I usually take note of extreme examples. When in April 2014 I was asked to help out with developing a storyline to turn my non-fiction book Jambusters about the Women’s Institute into the drama series, Home Fires, for ITV I was cross-questioned on every possible aspect of the early months of the Second World War. It is a topic I know well, having written six books about the era. The script writer was teasing me, trying to catch me out, and on one occasion he thought he had won: ‘What day did it start snowing in 1940?’ he asked. I replied immediately, January 28th. 'How on earth did you know that?’ he asked. Well, it’s quite simple really. There had been plans to hold a big agricultural meeting in London on 31st January but it had to be cancelled because of the ice storm and extreme snowfall that had led to travel chaos. Trains were stranded all over the country, their points frozen solid, birds died on the wing and wild ponies on the hills in north Wales were entombed in ice. There were 12 foot snow drifts in Lancashire and Bolton was almost completely cut off. How could I possibly have overlooked a weather event like that?

I wrote last month about my great uncle, Sandy Irvine, who was last seen close to the summit of Mount Everest in 1924. He disappeared in cloud at 12:50, probably the result of a dramatic storm high on the mountain, and was never seen again. That weather event almost certainly accounted for his demise. At the opposite end of the spectrum, moonlit nights during the Second World War spelled danger of a different kind. The ‘Bombers’ Moon’ meant that the terrifying menace of aerial bombardment was at its most dramatic when the pilots could see their targets. Every diary I have ever read that spoke about bombing talked of the terror of moonlight.

Far, far away from Britain, in the jungles of Thailand on 3rd September 1944 prisoners of the Japanese stared up at the sky in horror as the Royal Air Force bombed the railway sidings just 100 yards from their camp on the Death Railway. The bombers came back again and again and the prisoners could hear the bombs whistling overhead not knowing whether they would fall in or outside the camp.  Splinters tore through the flimsy bamboo and attap of the huts. ‘The earth shook and shivered as we lay in the shallow ditches, not knowing whether the bombs were in or only around the camp,’ wrote Lieutenant Louis Baume. Once it was over and the dust settled, the moon offered them a view of a hideous scene, bathed in ghostly silver: ‘in front of the hospital lay rows and rows of corpses, broken and bloody.  Around the huts, in the grass and on the paths lay others, killed as they ran for cover.  Alone, with his sword trailing in the dust behind him and with tears in his eyes, the Japanese guard drifted and paused, helplessly saluting the dead.’ The power of that image haunted me when I visited the site of the camp in 2003. Yet the strongest voice I heard in my head was that of Louis Baume insisting that nothing could break the men's spirit. Their first concern was how many men they could get to the hospital hut to be saved by the new miracle drug that had been delivered to them by the Red Cross earlier that week: penicillin.

How extraordinary that on that September date sixteen years earlier, Alexander Fleming had returned home from his holiday to discover that the unseasonably cold, damp weather had caused piles of culture dishes smeared with Staphylococcus bacteria to grow greenish-yellow mould: penicillin was discovered. Without that damp spell the injured men in the steaming rain forest in Thailand might not have survived. So, for good or for ill, I continue to be fascinated and obsessed by the weather.

Now, where is my radio? I need to listen to the shipping forecast.
Posted by Unknown at 00:01

Wonderful post. I was fascinated - well, I'm British and it was about weather! Thank you.

What a lovely, lyrical post. I hadn't realised Harold Godwinson had put his faith in the bad weather!

Thank you, Kath. I am delighted you enjoyed it. So pleased to be among such lovely historical writers who I respect so much.

Thank you Susan too. We've got some exciting weather coming up. Have you seen the shipping forecast?! Warnings of gales in all areas tonight except Trafalgar and Rockall is 6 to gale 8 increasing severe gale 9 to violent storm 11. I think we're in for some serious wind tomorrow...