Victorian Plant Hunters; their legacy in our gardens, by Leslie Wilson 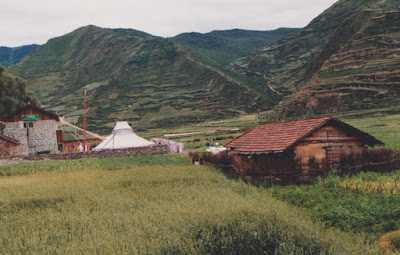 This is the upper Min River Valley, near Songpan, Tibetan Sichuan, up which we travelled  in a Chinese mini-bus tour in the year 2000, and saw buddleia growing wild - truly wild, not feral, as it does in this country, cheering up railway embankments and finding a toe-hold in walls. Here we (or rather I, for I was the member of the party who looked out for such things) also saw clematis tangutica sprawling across the rough grass. 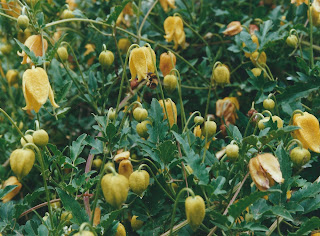 Since our return, I have planted it in our garden, where it thrives on our poor, chalky-flinty Chilterns soils, has taken over a section of the hedge and fence, and invaded my neighbour's garden with its deceptively demure yellow, lantern-like flowers, and its lovely fluffy seedheads.
Cut it down and it sprouts up again within a very short time. Note the Chinese bee enjoying the pollen! A huge amount of our garden plants come from China and many of those from Sichuan, and it's easy to take them for granted and forget what it was like for those who first collected them.

The plant hunters were part of the great Imperialist endeavour; sometimes ruthless plunderers
they scrambled across remote parts of the world to find new species. I don't know who collected the first clematis tanguticas to come back to the West; the plant hunter Ernest Wilson mentions seeing them in Sichuan: 'On rocky screes the yellow-flowered clematis tangutica is abundant and was covered with its top-shaped blossoms.' He brought back a haul of them, too.
Wilson was born in 1876, and it was in 1903, when he was collecting in Sichuan for the Veitch nursery, that he travelled up to Songpan.

It was near this town that he saw his first lilium regale, the Regal Lily, a plant then unknown in the West.
'By the wayside,' he wrote, in rock-crevice by the torrent's edge and hight up on the mountainside and precipice this Lily in full bloom greets the weary wayfarer. Not in twos and threes but in hundreds, in thousands, aye, in tens of thousands. Its slender stems..overtop the coarse grasses and scrub and are crowned with one to several large funnel-shaped flowers, each more or less wine-coloured without, pure white and lustrous on the face, clear canary yellow within the tube and each stamen filament topped with a golden anther. The air in the cool of the morning and in the evening is laden with delicious perfume exhaled from every blossom.'
I can almost smell the scent as I type out that description, and a photograph seems almost superfluous, but here they are in my garden.It was on that journey that Wilson got his leg broken in several plances, and was lucky not to lose it. He was tended by Dr Davidson of the Friends (Quaker) mission in Chengdu, who expertly set the leg. 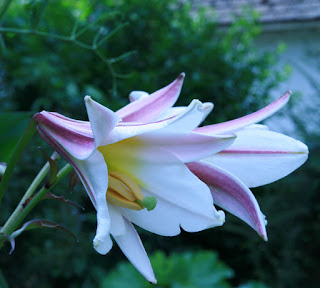 Sadly, the arrival of the horrible lily beetle in England means that it's a struggle to cultivate them now: I have almost given up. They used to be trouble-free and reliable, and their scent a joy in July. Wilson lifted six thousand bulbs from that rock garden, and took them to America. I suppose the ones I grew are their descendants. When we travelled up the Min River it was July, and too late to see them, but I believe they haven't all been pillaged by plant hunters. 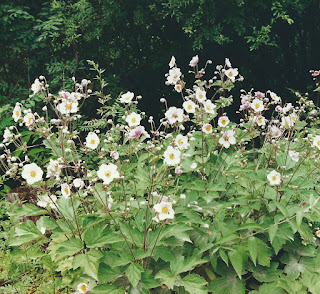 Other flowers that Wilson mentioned include the 'Anemone vitifolia, with white and pink flowers like the Japanese anemone'. Here are some we saw growing wild in the enchanting national park of Jiuzhaigou Valley. It is wonderful to see the kind of plants we grow in the garden, in their wild homeland. As a child, I somehow assumed that all large-flowered garden plants were bred from smaller ones, but of course this isn't the case. (I began to be enlightened when I saw my first wild cranesbill, geranium pratense, growing at Strelley, Nottinghamshire, were we used to walk the dog. They were a vision of delight to me and are still one of my favourite flowers and a star of my pocket-handkerchief wildflower 'meadow.')

This gentian, not mentioned by Wilson, is one we photographed growing at a high altitude on a Sichuan pass (about 400 metres); where yaks grazed and our minibus had to turn round because the park we were due to visit was no longer accessible; there'd been a landslip. This, of course, was the kind of thing Wilson had to encounter all the time; the roads weren't tarmacked then, and he travelled in a litter. It was a falling rock in a minor landslip that broke Wilson's leg. When I think of some of the narrow roads we travelled, with a drop of a thousand feet or so on one side, I feel giddy just at the idea of swinging along in a sedan chair. 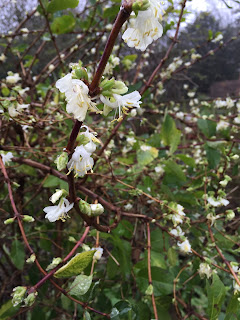 The fragrant winter-flowering shrubby honeysuckle (Lonicera fragrantissima) which is currently the delight of our front garden, filling the air with scent on mild days and providing food for bumblebees, was brought back from China by Robert Fortune, after a collecting journey when he saw off two pirate ships (while sick with fever) with his shotgun. I do wonder whether there is some exaggeration in his account of his determined attack on the pirates, and the fear and cowardice of the Chinese crew; it is so much the stereotype of colonial writing. Unfortunately, I can't find an account of the finding of the Lonicera in his book 'Three Years' Wanderings in China', but it is possible that he bought them from a nursery; he often did. But even travelling China and looking for nurseries was a risky procedure in those days, and he was often attacked - though he did also meet many friendly and helpful Chinese. He was incensed by one nurseryman who boiled seeds before selling them to Westerners, hoping they would blame themselves and come back the following year for more. Fortune also collected (among many others) the Japanese snowball (Viburnum plicatum 'Sterile'), Weigela Florida, and winter-flowering jasmine.
Of course, Victorian plant hunters also harvested irresponsibly and often destructively. Wilson lost an entire consignment of Lilium regale bulbs on the way home, and on the following year, when he returned, his team plundered complete valleys. No longer would any traveller enjoy the beautiful, fragrant scene he so vividly described. One of the worst stories I have read is aboutorchid hunters who destroyed the habitat of the orchids they had harvested, felling large areas of forest so that they would henceforth have the monopoly on that particular species. Responsible modern plant hunters, such as Roy Lancaster of the RHS, operate with permits, and only take seeds.
But however unethically the plant hunters operated,  their introductions - with a few notable exceptions, such as Japanese knotweed -  have not only added much beauty to our gardens, they have also helped our pollinators by extending the amount of pollen available to insects throughout the year. Through December and early January 2015-16, the lonicera fragrantissima has been feeding bumble bees awoken by the unseasonable mildness, as has also the viburnum tinus. Snowdrops, another excellent food source for early-waking bees, are another introduction, for they're not thought native to Britain. And hollyhocks (which in my garden always seem to have a bumble bee behind visible at their hearts), originate from China; apples (a quintessential British fruit?) from central Asia. That's only a very few examples among a wealth of plant life, and it's been shown that native insects, animals, and birds benefit from a wide range of introduced plants.
Colour photos by David and Leslie Wilson
Posted by Leslie Wilson at 00:30

Ah, Leslie, I wish I had written this post. It is marvellous. I am always fascinated by the origins of everything growing on our farm and I quite fancied myself as a Victorian (female) Plant Hunter, but as you say some of them were very irresponsible. Very informative post, thank you

Plenty of plants yet to track, Carol!

Fascinating, Leslie. I love the idea of plants telling stories.

Fascinating blog. Aren't most trees and plants in UK non-indigenous? I was told that butterfly-loving Buddleia only appeared in the wild in Britain in the 1920s. It spread rapidly after the Blitz, colonising bomb-sites. Now DEFRA considers it a dangerous non-native plant, and Network Rail blames it for obscuring signals and growing into power lines. Soon we will hear 'Virgin Rail apologise for the late arrival of the 17.52, held up by an invading buddliea davidii.'

Oak, ash and thorn were supposed to be the ancient British native trees, but there are also holly, elder, wild privet, wayfaring tree,field maple, black poplar, aspen, many species of willow, birch, alder, hazel,beech and hornbeam (south east England natives),wych elm, rowan, whitebeam, wild cherry, bird cherry, crab apple,Scots pine, juniper, yew. Box, according to my book, is both native AND introduced, just to confuse matters. Sweet chestnuts were brought by the Romans, and horse chestnuts introduced in the 17th century, sycamore in the 15th century (we could have done without it, in my opinion, since they are an annoyance, self-seeding in the garden.) I think the vast majority of wildflowers are native, though some have been introduced, and it's fascinating to see the ones that are ancient introductions, from the Bronze Age even. I guess most arrived as food plants or medicinal herbs. I guess others came on people's feet, across the Channel, or in bundles of imported foodstuffs?