Caleb's Crossing was published in 2011, but I've only just come across it. I think it's remarkable, in a number of ways. 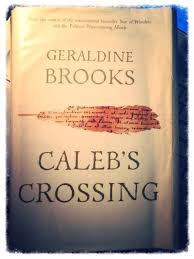 It's based on the few facts that are known about a young man from Martha's Vineyard who in 1665 became the first Native American graduate of Harvard College. Geraldine Brooks, an Australian who now lives on Martha's Vineyard, first became aware of him from materials prepared by the Wampanoag Tribe of Gay Head/Aquinnah. In her afterword, where she explains the relationship between the known facts and the fiction she created from them, she says that some members of the tribe were sympathetic towards what she was doing, whereas others were doubtful about whether it was right to fictionalise a figure who meant so much to them. I found her discussion interesting; many historical novelists feature real people in their work - I certainly have done; and it can be problematic. How faithful should you be to the truth?

Well, Geraldine uses her afterword to explore this. Certainly, it is not surprising that those to whose culture and history 'Caleb' belongs should feel proprietorial - and probably protective - towards him; but as an outsider, it seems to me that she has honoured him, and that it was a hugely worthwhile thing to bring his story to a wider audience.

So what is the story of the novel? Well, it is narrated by Bethia, the daughter of very early settlers in America. Her grandfather first came to the island because he found the beliefs and practices of his coreligionists on the mainland too restrictive. The island is a gentler place than the mainland in terms of its climate, and also in terms of the relationships between the settlers and the native Americans, which are far more respectful than on the mainland.

This is not to say that the settlers are enlightened in every way. Bethia's role is very constricted. She is subservient not only to her father and grandfather, but also to her brother. Although her father does begin by educating her alongside her brother, he stops when he feels that she is becoming more learned than is suitable for her gender - and when it becomes obvious that she is much quicker than her brother. This doesn't stop her though; she eavesdrops on her brother's lessons and continues to learn Latin and Hebrew and theology.

But she learns much more than this. She has a yearning for freedom, and she begins to explore the island alone. She meets Caleb, at this point very much a Native American, and they begin to teach each other the ways of their respective peoples; she learns the Wampoanoag language. She comes to love Caleb, although she never voices it - perhaps doesn't even quite realise it.

At first he is very much under the influence of his uncle, Tequamuck: a 'pawaaw' who seems to have strange powers and sees the settlers as a terrible threat. Caleb comes to believe that there is another way; that if he uses his formidable intellect to become educated in the settlers' ways - if he 'crosses', that may be the best way to help his people. So he comes to learn from Bethia's father.

Things happen, and the lives of Bethia and Caleb keep crossing over. Both are beautifully realised characters, and it's almost unbearable when things almost, but not quite work out for Caleb. The island is vulnerable, and life is hard; the ocean has to be crossed even on the short journey to the mainland, and storms arise swiftly and fatally. Nowhere is a safe haven, and one tragedy follows and leads to another.

It's an absorbing story and a fascinating one. The world it creates is completely convincing and seems built on a foundation of careful research; the details of everyday life, of how the settlers survived and sustained themselves, are almost as interesting as the emotional journeys of the characters. I was intrigued by the language Geraldine Brooks uses; I'm normally wary of attempts to recreate the rhythms of speech and vocabulary of past times - how can they ever be accurate? But she does this, and for me it works; it sounds authentic.

And at the back of it are the familiar stories - of colonisation, and of how societies treat the stranger in their midst.

But it's even more sobering - and heart-breaking - when the stranger is actually the original inhabitant.
Posted by Sue Purkiss at 02:00

I have a confession to make: I bought this when it came out and STILL haven't read more than a few pages. I was swamped with other books. I must get back into it. I have read three of her other novels, Year Of Wonders, March and, my favourite, People Of The Book. I found March fascinating because I hadn't known that about Louisa May Alcott's father. What a character! Totally vegan and the fruit practically had to have left a suicide note before the family could eat it. People Of The Book was wonderful, too. I loved the forensics and the stories that connected with the Sarajevo Haggadah reminded me of James A Michener's The Source. I am looking forward to reading The Hidden Chord, though I will see if my local library has it before I buy another book - I just found new homes for 100 of my beloved books and mustn't fill up the gaps too quickly - I still have a couple of thousand!

Will try these others - thanks, Sue!

I think People of the Book is an absolute masterpiece. And Year of Wonders is excellent too. So thank you for drawing my attention to this one, Sue. Sounds like it's a must.