Things That Go Bump In The Night by Katherine Clements


As I settle down to pen my first History Girls post, I’m watching a neighbour tussling with the naked, bedraggled Christmas tree that, for the last few weeks, has stood, bedecked and glittering, at her window. The beginning of January is always an odd time. We leave behind the tinsel and mince pies and welcome in the New Year with resolutions, fresh starts and, thanks to the mild weather, the first glimpses of spring. But we’ve still got a few winter months to go and this year, instead of longing for the daffodils and lighter evenings, I’m embracing the dark.

I’m writing my third historical novel, a ghost story of sorts, set on the Yorkshire Moors in the 17th century. As part of my research I’ve been reading accounts of early modern ghost sightings. What better way to relish the long evenings than curling up under a blanket, reading by candlelight and scaring myself silly?

The most striking thing I’ve noticed is how the elements of a good ghost story have remained relatively unchanged over the centuries. Belief in ghosts, or in the ability of the dead to return and influence the living, has been around for millennia. Archaeology provides proof of pre-historic cults of ancestor worship, ideas about the afterlife, and rituals for the appeasement of the dead. And throughout history most religions have had some concept that allows for the existence of the supernatural.

The Catholic concept of Purgatory meant that departed souls who had not made their way to their final destination were able to return and wander the earth. Catholic priests were considered essential for exorcism or ‘spirit-laying’ until the Reformation. But Protestant reformers considered such practice as Catholic superstition. They believed that souls departed straight to Heaven or Hell and if any returned it was a result of God’s will and not to be interfered with. English Canon Law forbade exorcism in 1604, though the practice continued in different forms. 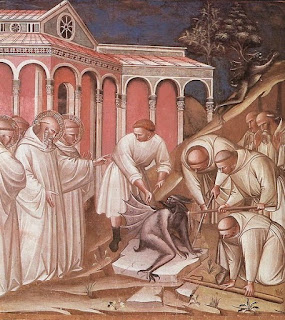 By the mid 17th century, my period of research, belief in the supernatural was still strong and still tied closely to religious belief. Visitations from beyond the grave were largely divided into two types: returning spirits of the dead, mostly ‘vengeful ghosts’ – those who had returned to right some wrong or settle some score, and ‘noisy ghosts’ – those who haunted houses or caused physical disturbances – the kind we might today call poltergeists.

The concept of the vengeful or intentional ghost has been around for a long time. The spirit usually returned with some task to complete, such as delivering a warning or ensuring justice was done. There are numerous reports of ghosts appearing to take revenge upon wrongdoers, to atone for their own misdemeanors or even settle legal disputes. The ghosts in Shakespeare’s plays might have been interpreted this way by a contemporary audience. Their intentions were often good. After all, if God was allowing them to return, then it must have been for some heavenly purpose. 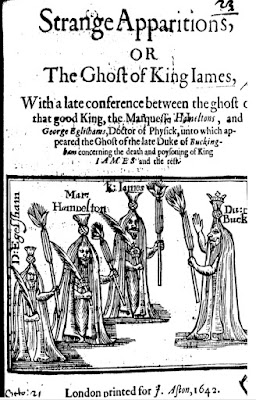 In this 17th century pamphlet, the ghost of the Duke of Buckingham has returned to warn of a plot to poison the King!

Poltergeist hauntings, or noisy ghosts, were interpreted with less certainty and more fear. Strange disturbances, sounds, smells, footsteps and voices – all the elements of a modern day horror – can be found in these accounts and then, as now, people loved a scary story.

As the century progressed towards the Enlightenment poltergeist hauntings become not only a source of gossip and fascination but also a debating ground for theologians, natural scientists and philosophical thinkers. The topic was a touchstone for the very existence of the supernatural. Were these occurrences the work of the vengeful dead? Were they malevolent demons working on Satan’s behalf? Or was it witchcraft? Though prosecuted cases of witchcraft began to decline at this time, belief in and fear of witches was still a reality for most.

The most famous example of the period is that of the Tedworth Drummer. In 1662 strange noises, smells and lights plagued the house of John Mompesson in Wiltshire. Next, a drum that had been confiscated from a local vagrant, William Dury, began to emit beats and even play out distinct tattoos. The source of these noises was a mystery, especially as the prime suspect, Dury himself, was locked up in Gloucester gaol.

Considered by some to be Dury exacting his revenge from afar by means of witchcraft, others believed it to be a genuine haunting. Word of mouth spread and the press had a field day. Before long, visitors curious to experience the phenomenon besieged the Mompessons. Among the supernatural tourists were gentlemen scholars, aristocrats and clergy. Two members of the Royal Court were even sent to investigate by Charles II.

Eventually, in a meeting with the King, Mompesson confessed that he had been the victim of a hoax, but it’s been suggested that this was simply a ploy to rid himself of the expense and inconvenience of all his uninvited human guests. His son, writing to John Wesley’s eldest brother admitted that ‘I, and all the family, knew the account which was published to be punctually true’. 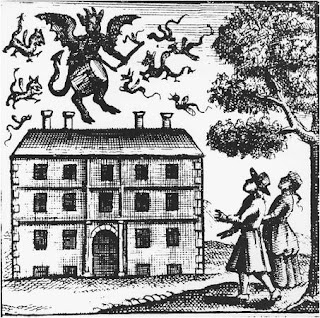 17th century woodcut of the house at Tedworth

We’ll never know the truth about the Tedworth Drummer, but what I love about this story and others like it is the mystery that still surrounds it and the sense of timelessness. On the first day of 2016 I watched a horror film made just a few years ago. It was a haunted house story, peppered with creepy knockings and bangings, unexplained smells and a disruptive, malevolent presence. Sound familiar?

Even in our skeptical, secular world, we still get a thrill from a good ghost story. And as their continued popularity shows, they can still be relevant. As part of our folklore they are an important part of our cultural, storytelling history – an attempt to explain our place in the world and those things that can’t yet be explained.

Shivers down the spine! There's often a ghost story on TV at Christmas, but I don't think there was this year, unless I missed it. I did catch the first episode of Toni Morrison's 'Beloved' on the radio last week though - there's a haunting for you!

Loved your first post Katherine.
I have a close friend who 'ghost busts' as a branch of her day job and she often gets requests. She recently had to deal with an incident of a family being bothered from the beyond when they bought their house and discovered that former deceased residents had not moved on. All members of the family who brought her in had had experiences (such as former residents getting into bed with them!). One of the family could actually see the people. So friend did her ghost busting thing (in a kindly manner) and the former residents were persuaded to depart. The supernatural activity has now ceased!

Thanks for the welcome everyone! That's a fascinating story Elizabeth. No matter what you believe about these things, people's experiences are the truth as they see it.

Welcome, Katherine, and what an interesting post. In Rome, in one of the churches, there is a tiny museum of Souls in Purgatory, consisting of physical messages they sent back to the living.
I have always been interested in the living deaths of unwilling nuns, forced to spend their lives on their knees praying to reduce the time in Purgatory of their relatives who lived it large outside in the world. Perhaps this is why so many ghosts are grey ladies.

Loved this post. I can recommend Icelandic ghost stories, many dating from the 17th Century. Icelandic wizards were said to create ghosts (sometimes by murder) which they then set to 'follow' someone they wanted to torment.

Some families were haunted by 'followers' who attached themselves to some member, generation after generation. Great stuff.