The Ballad of Mulan, a history girl of note - by Katherine Langrish

I've always liked Arthur Waley's translations of Chinese literature and poetry, and I came across this one recently in an old edition I found in a second-hand bookshop. It was exciting to find a source for the story most of us know only from Disney, and I thought History Girl readers would enjoy it too - especially the unexpected ending as it pokes fun at the notion that men and women are essentially different in their abilities. The rough ballad style Waley has chosen seems well suited to the simplicity of the story, to which he adds the note: 'Written in northern China during the domination of the Wei Tartars, Sixth Century AD'.  You can compare it with a more recent translation here: http://www.chinapage.com/mulan.html 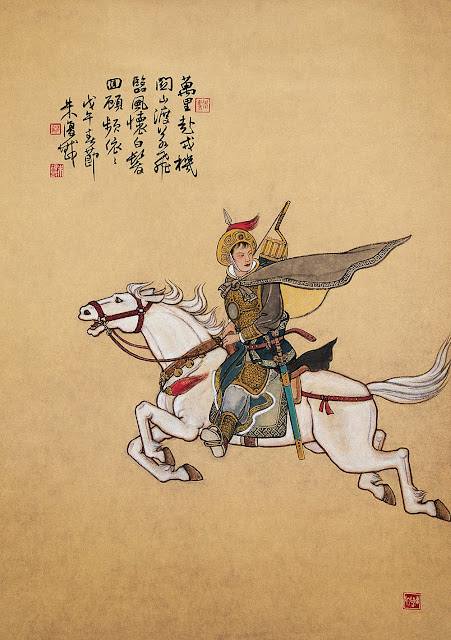 Click, click, for ever click, click;
Mulan sits at the door and weaves.
Listen, and you will not hear the shuttle’s sound,
But only hear a girl’s sobs and sighs.
“Oh tell me, lady, are you thinking of your love,
Oh tell me, lady, are you longing for your dear?”
“Oh no, oh no, I am not thinking of my love,
Oh no, oh no, I am not longing for my dear.
But last night I read the battle-roll;
The Khan has ordered a great levy of men.
The battle-roll was written in twelve books,
And in each book stood my father’s name.
My father’s sons are not grown men,
And of my brothers, none is older than me.
Oh let me to the market to buy saddle and horse,
And ride with the soldiers to take my father’s place.”
In the eastern market she’s bought a gallant horse,
In the western market she’s bought saddle and cloth.
In the southern market she’s bought snaffle and reins,
In the northern market she’s bought a tall whip.
In the morning she stole from her father’s and mother’s house;
At night she was camping by the Yellow River’s side.
She could not hear her father and mother calling to her by her name,
But only the voice of the Yellow River as its waters swirled through the night.
At dawn they left the River and went on their way;
At dusk they came to the Black Water’s side.
She could not hear her father and mother calling to her by her name,
She could only hear the muffled voices of foreign horsemen riding on the hills of Yen.
A thousand leagues she tramped on the errands of war,
Frontiers and hills she crossed like a bird in flight.
Through the northern air echoed the watchman’s tap;
The wintry light gleamed on coats of mail.
The captain had fought a hundred fights, and died;
The warriors in ten years had won their rest.
They went home, they saw the Emperor’s face;
The Son of Heaven was seated in the Hall of Light.
The deeds of the brave were recorded in twelve books;
In prizes he gave a hundred thousand cash.
Then spoke the Khan and asked her what she would take.
“Oh, Mulan asks not to be made
A Counsellor at the Khan’s court;
I only beg for a camel that can march
A thousand leagues a day,
To take me back to my home.”
When her father and mother heard that she had come,
They went out to the wall and led her back to the house.
When her little sister heard that she had come,
She went to the door and rouged her face afresh.
When her little brother heard that his sister had come,
He sharpened his knife and darted like a flash
Towards the pigs and sheep.
She opened the gate that leads to the eastern tower,
She sat on her bed that stood in the western tower,
She cast aside her heavy soldier’s cloak,
And wore again her old-time dress.
She stood at the window and bound her cloudy hair;
She went to the mirror and fastened her yellow combs.
She left the house and met her messmates on the road;
Her messmates were startled out of their wits.
They had marched with her for twelve years of war
And never known that Mulan was a girl.
For the male hare sits with its legs tucked in,
And the female hare is known for her bleary eye;
But set them both scampering side by side,
And who so wise could tell you “This is he”?
Translated by Arthur Waley, Chinese Poems, George Allen & Unwin 1936 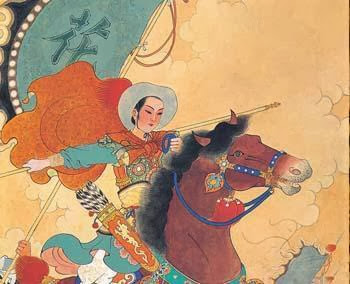 Hua Mulan on bay horse: image from http://www.chinese-swords-guide.com/mulan.html
Posted by Katherine Langrish at 06:00

You've sent me racing to find out more about Arthur Waley. Thank you!

A heroine after my own heart! I haven't seen the Disney version of Mulan, but this reminds me of a book I came across during my Genghis Khan research: "I Rode a Horse of Milk White Jade" by Diana Wilson, where the heroine also dresses as a boy to ride her favourite horse with the Khan's soldiers - perhaps it's based on the Mulan story?

Thanks, Kath. I did enjoy this. I must get back Arthur Waley - he was such a brilliant translator of Chinese poetry!

Such a great title, Katherine!