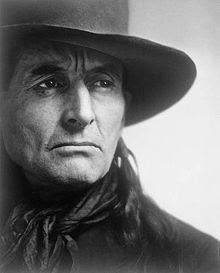 Look at this chap, all rugged and craggy faced with his long hair, grim set mouth and serious eyes. It's of a man called Grey Owl, taken at the height of his international fame in 1936. What was he famous for? Not an actor in Westerns, but one of the first nature conservationists who - ahead of all popular notions - advocated complete bans on hunting wild animals.

He wrote books, appeared in non fiction films about the wild Canadian country in which he lived and worked (he was a park ranger in the mid 30s), and toured all over North America and Europe giving lectures and meeting royalty (he was presented to George IV in 1937).

He was born in 1888 and like many First Nation Canadians joined up to fight for Britain in World War One.  He'd already been working in the wilds of Obijwe country working as a fur trapper since he was in his late teens. His military documents identified him as born in Montreal and 'Indian'.
During the war he suffered a serious bout of gangrene and ended up in British military hospitals for nearly a year.

He returned to Canada at the end of the war where he took up his life as a woodsman, trapping beaver mostly. The war had taken it's toll and he began drinking.

But in 1925 he met a young woman who completely changed his point of view. She was nearly half his age, she was  Iroquois and called Anaharheo.

She persuaded him to stop killing animals and start protecting them. Grey Owl began writing books and articles about nature conservation, they became hugely popular.

Grey Owl told his publisher - and the world - that he was half Scots and half Apache. That his parents met on one of Wild Bill Hickok's Western Tours in Great Britain and that he'd travelled with them and he was born in Mexico.

He went on lecture tours and on one stop, in Hastings in 1937, had tea with two of his fans, a pair of elderly English women. They probably had a lot to talk about, they were the women who'd bought him up, in a terraced house just down the hill from where I live now. They were his Great Aunts Cary and Ada. He was Archie Belaney. Hastings born and bred.

They kept his secret safe.

But Grey Owl was drinking more, he split up with Anahareo and married a French Canadian woman shortly after. But as well as being an alcoholic Grey Owl was a bigamist. He'd married legally for the first time just before World War One, then married - illegally - an English woman while he was in hospital in Britain.

He died in 1938 from pneumonia (aggravated no doubt by the drinking) alone in his cabin. The truth came out and his work was discredited. He was the Rachel Dolezal (the American white woman who made a career out of being black) of his age, like her his career depended on his ethnicity and when he was discovered to be a man from an East Sussex seaside town his authority on matters of the Canadian wild was shot to pieces.

But Anahareo, who'd split with him in 1936, forged an independent career as an animal rights activist. She was awarded a medal for her work by an International Animal Rights elected a member of the Order of Canada. Anahareo was truly a woman ahead of her time.

She asserted she never knew the truth about Archie Belaney, that she'd been hurt when she found out his true identity.  When they met he'd already been lying about his identity for the past twenty years.

The only thing that was true  about Archie Belaney was his birth date. Archie Belaney emigrated to Canada as a teenager, as soon as his aunts would let him go. He didn't want to be a grammar school boy from a seaside town, he wanted to be that noble savage he'd read about all his boyhood in books.


Perhaps the more he was believed, the more he wanted to be believed.  I don't know what it takes to make yourself over so entirely. This is far from Mary Willcocks who spent a just few months as south seas royalty - this is whole a lifetime. Did he have to convince himself first? Was it chance, opportunity, foolhardiness or arrogance?   Or maybe, when he was canoeing on the lake outside his cabin in the Canadian wilderness, far from the prom and the pier, he just didn't care...


My latest book is about another impostor - The Curious Tale of The Lady Caraboo is published by Corgi.

PS Hastings Museum has a lot of info about Grey Owl - and I haven't forgotten there was a film about him made recently with Pierce Brosnan.

Posted by Catherine Johnson at 02:30

People want to believe what sounds romantic. There's an Australian connection to the Tichborne Claimant, who would never have gotten away with it as far as he did if the dead man's mother hadn't wanted to believe, despite the fact that he looked nothing like the man he was pretending to be. And we've had literary pretenders, such as the one who, some years ago, won a major Australian prize for literature while pretending it was a history of her Ukrainian family's wartime experiences disguised as fiction(her family was British and had never had any of the experiences she wrote about). She had plenty of defenders even after the truth came out - and others, journalists who had thought she was the greatest thing since sliced bread, who now declared that they had never liked her. She was also accused of plagiarism - then did it again. Romance!

What interesting stories, Catherine and Sue! Grey Owl certainly looks like what he purported to be. I wonder, were his parents just ordinary English? It must certainly have taken some guts to leave Hastings and go off into the Canadian outback as a teenager.

Yes, he does look rather Native American, doesn't he? But you never know about these things, we've had a number of Indigenous Australians at my school who don't look remotely like what they are.

I remember finding some of his books in the library at Bexleyheath when I was a child. They were all about his life in the Canadian wilderness, and about animals, and I remember there was something about Anahareo too; and they were illustrated throughout with beautiful drawings. I loved those books. They were so romantic and yet down-to-earth - presumably because he really was a trapper and woodsman even if he wasn't who he said he was. And I loved his name 'Grey Owl'. I did learn the truth about him many years later, as an adult, and was surprised. But I still remember how much I loved his books.

Fascinating! As for his way of living his life' I have no comment/judgement to make. I think when these things come out there is always a lot of ugly abuse of the person concerned. I did love Caraboo, by the way - and she was a totally convincing and sympathetic character.

Thanks for your comments. Ann I read that the Attenborough brothers David and Richard saw one of his lectures and that's how David got into nature conservation and why richard made the film. Although I wasn't sure about the dates. I just think how much front people must have or if they want to believe something so much....
Thanks for the kind words about Caraboo leslie, much appreciated.