Fast before you feast, by Vanora Bennett

My grandmother used to say indulgently that there was no harm in twelve mince pies a year, one for each of the twelve days of Christmas. This year I’ve way exceeded my quota, as I’m afraid I do most years. December, from start to finish, was the usual binge of food, drink and shopping, sometimes pleasurable, sometimes just panicky, too often to the tinny background noise of shopping-mall carols. Now is the time to pay the price. 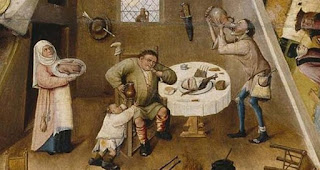 So here I am pulling out the dark, shapeless January clothes suitable for the beginning of what has become a 21st-century calendar ritual - a month of shame and abstinence for penitent Christmas gluttons who have been feasting since Advent began on December 1. And, as I think about this now widely accepted timetable, it strikes me that - although our celebration of Christmas obviously comes from the old Christian tradition – our pattern of feast and fast nowadays has flipped over and become almost the opposite of what was observed in the high days of Christendom.

Europeans from 1200 to 1500, the pre-Reformation period when Western Christianity was at its most cohesive, lived by a religious – and culinary – calendar of alternate feasts and fasts. Both fasting and feasting were gestures of faith in God and trust that the divinely ordered world would provide for mankind at the right time. In an age when churchgoing could be sporadic, it was the act of fasting for between half and a third of the days of the year – on Wednesdays, Fridays, sometimes Saturdays, for the entire Lenten 40-day period before Easter, and what we now call the Advent weeks before Christmas, as well as at the beginning of every quarter and before the most important saints’ days – that really defined Christians as a group.Fasting didn’t mean starving, except for the wilder type of early Christian ascetics, woolly-bearded mystics living on dried grasses and locusts, or anorexic girl nuns with their heads full of visions of their bridegroom, Christ. For the overwhelming majority, and for the Church itself, fast days were low-key affairs. Most believers made just two relatively undramatic changes on a fast day: first, missing out meat and animal fats from the daily diet, and replacing them with fish or other proteins and olive oil rather than animal-based butter or lard, and, second, skipping one meal. That was enough, though, to keep most of the maidens and their swains shapely in an obesity-free world. 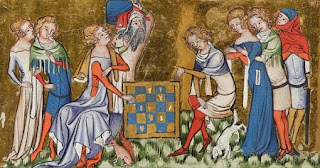 Very practical considerations governed Church leaders as they established the calendar of fasting in the early centuries of Christianity. The Church had much less to do with the faithful in the summer, certainly demanding less fasting in the season when people wanted to be out and about and at peak strength for tending the crops, partying and making wine or love.

The religious timetable was geared towards the quieter and more reflective winter months, starting in autumn after the harvest and, through the calendar of feast and fast days, running over the whole story of Christianity from the birth to the death and ascension of Christ by the time Common Time, and the next summer, came round again. The two biggest blocks of fasting time – before Christmas and Easter – both occurred in the low season for food production, when days were short, work minimal and food, no longer being produced, needed to be eked out till spring.

But what has always surprised me (as I imagine it would anyone who has walked down Oxford Street or Regent Street in modern times) is how serious the autumn fast before Christmas was, traditionally, and how long it went on for. For many centuries, it lasted much longer than Advent does today - it was a full six-week penance going from mid-November through January. Almost every day in the weeks of late November and December right through to Epiphany on January 6 (40 out of 56 days) were earmarked for self-denial.

This autumn fast followed the roast goose of St Martin’s Day, or Martinmas, 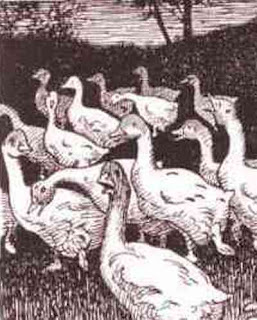 which was celebrated on 11 November, and at which the last bits of the year’s earthly business were tied up. Martinmas was the time for a labourer who wanted a new job to go to a seasonal hiring fair looking for a master. Autumn wheat seeding was completed. So was the annual slaughter of fattened cattle, producing Martinmas beef, wine, and a mini-carnival before winter really set in.

With the hangover the next day, November 12, came what was then called St Martin’s Lent. Later the Church shortened this to Advent, but kept December as a time for fasting and praying and listening to music in preparation for the Christmas feast. It was only in the late 20th century that this spiritual cleansing was cut down to nothing much more, for most people, than the occasional carol service or even just a burst of godrestyemerrygentlemen warbled in the bath, while the jolly secular seasonal preparations in the shopping malls mushroomed.

It’s very much within living memory that the weeks leading up to Christmas stopped being a fast and became the feeding-and-shopping frenzy we know today. 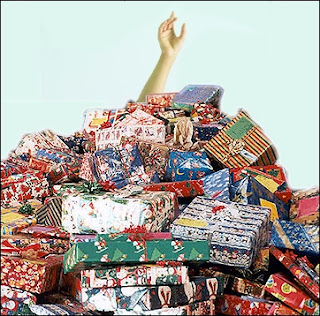 It’s also pretty much a new departure from the traditional twelve days of Christmas that, just when my grandmother would have been innocently tucking into the seventh of her 12 mince pies and guiltlessly breaking open more champagne to celebrate the 12 days of her modest festive season, I (like millions of others who have already been feasting for many, many days by now, pretty much a month) am swearing off everything and going on a radical detox for January.

It now seems to me that we might have done better to stick with the more ascetic older tradition, and not just gone for the bloatfest of sick-making mince pies and overstuffed stuffing starting about 57 shopping days before Christmas. A bit of self-denial first would have made the self-indulgence afterwards sweeter. The guilt of doing it the other way round is much less fun. With her one mince pie a day for the twelve days of Christmas, I think my grandmother  had her timing absolutely right.

This post fills me with longing for Christmas past! It's also interesting as I'm currently writing a novel in which seasonal feasts and fasts are observed, and I've been surprised to find how many there were.

When was it, I wonder, that present-giving became the main focus of Christmas - and the source of so much stress and unnecessary expense for many people? Have people always given each other gifts at this season or is it a relatively modern thing?

I don't know about presents, but I think I'll try the pre-Christmas abstinence next year.