THE MASTERY OF KNACK by Lydia Syson

Twelfth night is over, the last sprig of desiccated ivy has been twitched away, and pavements are filling up with fir trees, propped up at dejected angles.  Time now, if you are so inclined, to turn to new year resolutions.  Back in 1957, had you been one of the million subscribers in Britain to The Practical Householder, you would probably be promising yourself to 'Modernise your home with Hardboard' this year. 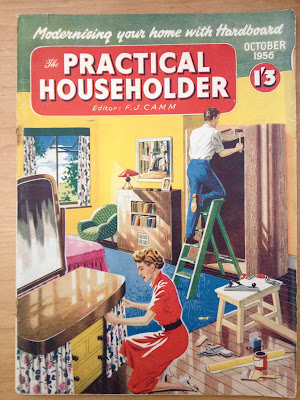 This edition from October 1956 was a Christmas present, and it's proved a beguiling read.  A jolly vintage journal bearing witness to the blossoming rage for Do-It-Yourself, it's full of frilly-aproned housewives and men with rolled-up sleeves working together to transform their homes, finding 'nu' ways to make their lives a little easier - less dirty, less draughty and certainly less hard on the knees.  And as the editorial convolutedly remarks, 'It is not alone to save money that people turn to D.I.Y.  What they started in order to effect financial economy, they now find a real pleasure, and in most cases they get a better job.  There are satisfactions in tangible achievement in the mastery of knack.  Away from the discipline of factory employment, it was a pleasant change to be one's own boss on a project and to set one's own pace and quality standards.'

But darker stories lurk between these colourful covers.  Concealment is everywhere. Adverts and advice alike hint at domestic versions of Cold War conspiracies. Were the 1950s simply one big cover-up?

One article gives instructions on 'Secret Locks': Simple to Make from Scrap and Which Can be Suitably Fitted to Poultry Houses and Sheds.  Another tells you how to make good with plaster - just cover over the cracks - while a third explains how to disguise a door with a false wall.  Making things stick was clearly a major issue.  Ready-made adhesives had suddenly made this a whole lot easier.  Some brands are familiar, like Evo-stik or Bostik; others have now vanished from the market, like Jiffytex, Casco, ('It pays to be fussy'), Certofix ('Make it immovable'), Dyox ('without a stain'), Seccotine ('sticks to everything') or Croid.  (Perhaps even 'indisputably the world's strongest glue' loses its staying power when its name has the ring of a haemorrhoid cream.) 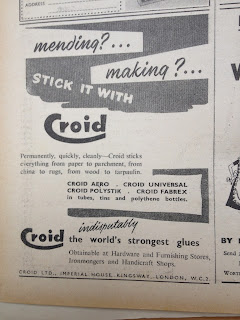 Everything can be sealed or filled or covered up somehow.  As well as boards for baths, there are curtains for chests-of-drawers, pelmets for curtains, fire screens disguised as bookcases, all kinds of flooring you can fit over floorboards, rugs galore, and any number of stick-on tiles, panels and plastic wipe-clean surfaces. Buy 'Remix', 'Seelastik', 'Plushionpile', 'Tryka', 'Warerite', 'Dekflor', 'Hardura'... 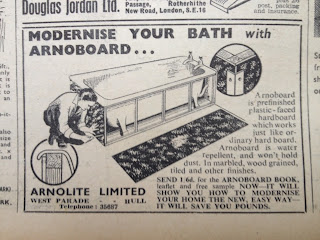 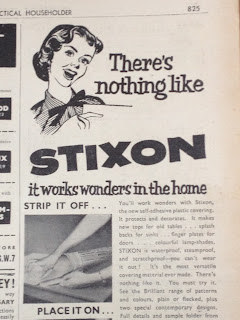 Despite their frilly aprons, clinched waists, and a worrying tendency to use 'Tool Power' for polishing rather than the manly tasks of sawing, sanding, turning, and drilling, women are visibly doing-it-themselves in the pages of The Practical Householder. 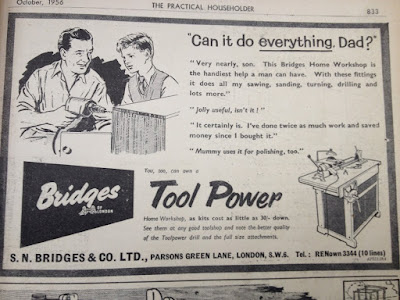 But though they might be single-handedly tiling bathrooms, laying floor tiles, renovating tables and binding carpets, these cheerful female figures can't entirely dissipate the building sense of unease.  Isn't there something mildly sinister about the 'Denison' disappearing loft ladder and the extra room it helps to hide? 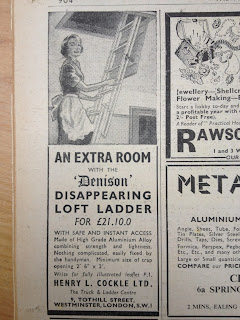 How, exactly, have these paws become dirty? 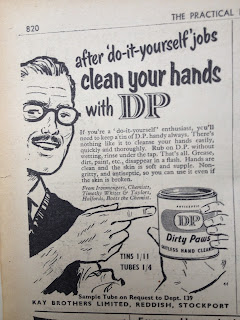 Do these right and left hands even match?  Perhaps that pointing finger actually belongs to an unknown interloper, possibly a spy.  And who are the 'Authorities' to be consulted before 'Installing a Bath'? 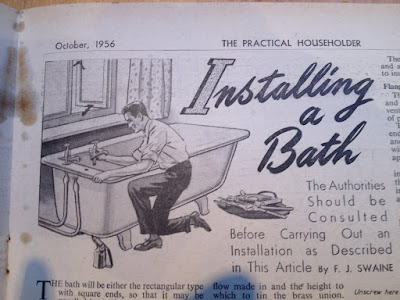 What a gift this urge to modernise must have been for MI5's bugging department.
I'm joking of course, but there's a little bit of me that isn't.  I know exactly why I'm thinking this way.  My mother, who turned sixteen in 1956, always used to claim the family phone was tapped because of her parents' involvement in the Communist Party.  As children, my brother and sister and I would laugh at the idea of the secret service listening in as she arranged her youth hostelling expeditions and discussed hockey matches. She was right of course, as this article about my grandfather, Jack Gaster, makes clear.

The reality of growing up under surveillance in the 1950s was brought home to me a few years ago during a series of events at Gresham College which culminated in the publication last October of Radiant Illusion? Middle-class recruits to Communism in the 1930s edited by my stepfather Nicholas Deakin.  The audience for the original lecture, panel discussion and seminar was full of 'red-nappy babies', people who'd grown up in radical left-wing households during the 1950s. One had subsequently discovered that her family lodger and baby-sitter had been a secret service plant. Over the last few years, the release of secret service files to the National Archives on a patchy, apparently arbitrary basis has revealed the degree of surveillance on a number of people suspected to have Communist and pacifist links. 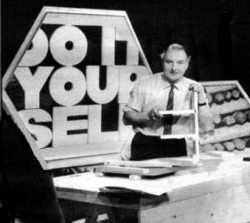 The original guru of British DIY and the first person to demonstrate home improvement techniques on television was Barry Bucknell. He was popular because he refused to patronise a generation of women who had spent the previous decade working in war factories and serving in the forces, and he took it in his stride when live demonstrations didn't go according to plan and wet wallpaper fell on his head. "This is not how you do it," he explained. Of course he was also heavily criticised in future decades for his part in destroying the original features of millions of Victorian and Edwardian homes - although his own tendency was to cover up fireplaces, floorboards and ceiling roses rather than remove them.  Decades of DIY restoration projects were born from 1950s 'improvements'. Bucknell was a pacifist and conscientious objector during the second world war and later became a Labour councillor for St Pancras, specialising in housing.  Did he join the Campaign for Nuclear Disarmament when it was launched in February 1958?  I don't know, but if so, it would hardly be surprising if his name turned up in secret service files in years to come.  A little ironic, when you consider the inadvertent assistance Bucknell must have given MI5 and Special Branch right through the Cold War.

www.lydiasyson.com
Posted by Lydia Syson at 00:01

This post is FULL of fascinating stuff - thanks, Lydia!

Yes, fascinating! And then the next generation took all the boards away... we have friends who live in an old farmhouse. Their parents put hardboard over old panelled doors and carefully blocked in draughty fireplaces - and our friends just as carefully removed them. Interesting about Bucknell's background.

Absolutely fascinating post. Many thanks. I really enjoyed the insight into these 1950s' cover-ups and love the sinister adverts.