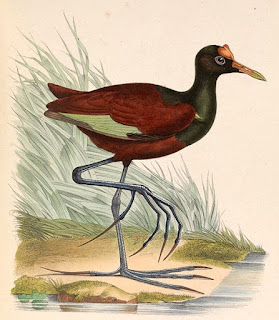 I don’t do social media. But my cats and I are great fans of Radio 4’s Tweet of the Day.

We have our different reasons.

The cats twitch their tails and lick their lips at the sound of birdsong. Meanwhile I relish the names of the birds and the disclosures of their intimate habits.

The bird who has caught my attention lately is the Northern Jacana (Jacana spinosa). This is because the female of the species seems to me to live the life of polyandrous Riley.

Here’s a photo of a pair of them, by Dominic Sherony, courtesy of Wikimedia Commons. 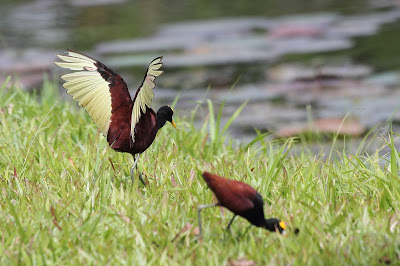 #
Edith Evans once observed ‘When a woman behaves like a man, why doesn’t she act like a nice man?’

The female Jacana spinosa lives out that aphorism - acting like male of many a species. Unfortunately she also acts like jerk with Narcissistic Personality Disorder.

She chooses her mates, seduces them with her plumage, has her way with them. Then she leaves them to look after the eggs and chicks while she goes off in pursuit of new males. 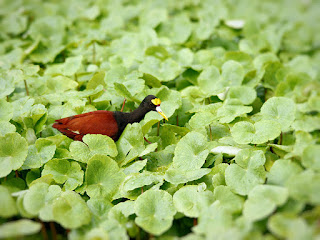 Here’s a picture of a Northern Jacana acting provocatively, if you want my opinion. This one is by Benjamin Keen, courtesy of Wikimedia Commons. 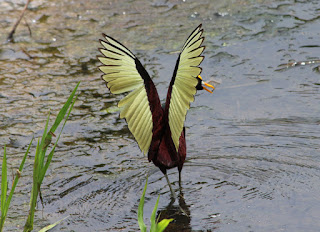 Thinking about this avian 'hussy' drew my mind to an issue I have long found interesting. In a bad way.

Why are there so many insulting words for a woman who has a lot of sex? And why so few for men?

One of my favourite resources, given that I write a lot of 18th century, is Francis Grose’s A Classical Dictionary of the Vulgar Tongue.

Here are some of the words in it for women who have a lot of sex: a cunning baggage, a wanton baggage, a biter, a bobtail, a buttered bun, a bureck, cleaver, a cleft, a coming wench; a forward wench, a breeding woman, a demy-rep, a doxy or a dodsey, a Drury-lane vestal, a froe, a fusty luggs, a giggler, a lady of easy virtue, a left-handed wife, a woman of the town, a harlot, one who prays with her knees upwards, a quean, a rantipole, one who lets out her fore room and lies backwards, a trollop, a wagtail, a woman of pleasure, a hedge whore, a mob or mab, a strumpet, an Athanasian Wench, a Quicunque Vult, a demanders for Glimmer or Fire, a bawdy Basket, a doxy, a Kinching Mort, a Kinching Co.

And for a man? A very few. The worst I could find was a ‘beard-splitter’.

In other sources, one might find ‘a Casanova’, ‘a bit of a lad’, ‘a ladykiller’ (and not in the Jack the Ripper sense’ or a snickering ‘one for the ladies’. Nothing very judgmental. In fact one imagine each of these phrases delivered with a wink and even in an admiring tone.

Francis Grose also has a vast number of insulting words for men who live in subservience to a female partner, or, heaven forfend, helps her around the house. So Mr Northern Jacana might have these things said of him:

His eyes water from the smoke of Charren; a man of that place coming out of his house weeping, because his wife had beat him, told his neighbours the smoke had made his eyes water

COMB. To comb one's head; to clapperclaw, or scold any one: a woman who lectures her husband, is said to comb his head. She combed his head with a joint stool; she threw a stool at him.

COT, or QUOT. A man who meddles with women's household business, particularly in the kitchen. The punishment commonly inflicted on a quot, is pinning a greasy dishclout to the skirts of his coat.

CURTAIN LECTURE. A woman who scolds her husband when in bed, is said to read him a curtain lecture.

DISHCLOUT. He has made a napkin of his dishclout; a saying of one who has married his cook maid.

A little later, in 1860, there appeared the Dictionary of Slang, Cant, and Vulgar Words Used at the Present Day in the Streets of London; the Universities of Oxford and Cambridge; the Houses of Parliament; the Dens of St. Giles; and the Palaces of St James. John Camden Hotten was the author.

Here we find another colourful collection of ladies of easy virtue: We still have mort and drab and mutton. Now we also have ‘a gay woman’. To which we can add a Kiddleywink, a Poll, a Shake, Shakester or Shickster, and the delightful Showfull Pullett. Less nice are a Blowen (a showy or flaunting prostitute) and a Jack, a low prostitute.

We also have a clause that I have failed to penetrate: To Joe Blake the Bartlemy, meaning to visit a low woman.

Meanwhile, speaking of low, here’s an update to my last post in this place, about the brutal re-branding of a Grade II Listed building in the historic view of a Scheduled Ancient Monument. The perpetrator, the sub-tenant of a Famous Chain of coffee shops, has been ordered by the council to remove the garish illegal advertising ‘forthwith’ from the façade of historic Wharf W. That was on December 15th, a month ago. Does anyone think Famous Chain's sub-tenant might have complied? Hands up who thinks that the Borough of Southwark has done anything to make him do so. Who is convinced that Famous Chain must have rushed in promptly to deal with its tenant’s non-compliance?

The picture at the top is also from Wikimedia Commons, and is by Marc Athanase Parfait Œillet Des Murs (1804-1878).

Yes, I've always been frustrated by not being able to find anything insulting enough to describe a man who misbehaves. I guess it goes with the culture, eh? Maybe if we were like Northern Jacanas the language might be different. The irony about Casanova is that from what I have read about him, he was a serial monogamist. He liked women, but tended to believe he was in love.

That dictionary is an excellent resource, isn't it? I found it on Gutenberg.

Casanova was a fairly responsible lover, even using contraception. And quite a modern one. He said that the pleasure he visibly conferred made up four fifths of his own. He also thought that women had more pleasure in sex as 'the feast takes place in their own house'. Moreover, they must really enjoy it, to put up with concomitant risks of childbirth ...

People tend to mix him up with Don Giovanni, who was clearly a case of Narcissistic or Borderline Personality Disorder. Hurting women was half the pleasure for him. And the confusion is intensified because Casanova did have a hand in the libretto of the opera. But he was absolutely no Don Giovanni, and tried his hardest never to hurt a woman emotionally. He was never cold or cruel. Also, many of his former lovers were thrilled to meet him again in later life, which says a great deal.

I love your idea of a sexual glossary from the point of view of a Northern Jacana, Sue. Could be at the very least a wonderful poem.

What a wonderful alien that Jacana would make! The look of her, I mean -

As for men, words are definitely in short supply. I believe that romance writers are now using “man whore”, which conveys a nice feeling of disdain, though only by picking up on the connotations of “whore” and thus on male contempt for women. Whether this has yet made it out from between the covers of books is a question to which I do not know the answer.

You are right, Mike. I am guilty of a terminological inexactitude. I think it should be 'women who have sex with a lot of different men'.
And yes, these insults may have a subtext of discouraging cuckoldry.
Man whore? We still need a single dedicated word for this phenomenon, replete with disdain.

Great blog and lovely pictures! To add to your litany of derogatory comments about 'promiscuous ' women, Cyprian, bit of muslin, Paphian, Impure.. But as for men - skirt-chaser? Male nymphomaniac. H'mm. Clearly it is about men's insecurities about their children being (or not being) their own. If property was passed down matrilineally, as happens in some cultures, I wonder if there is more importance given to female monogamy then? Not very good English. sorry!

I've noticed a similar thing with swear words. What's generally regarded as the worst word to say / call someone? Yes, that's the one. But the masculine equivalent is 'a dick' which just means, 'a bit of an idiot'. See the difference in force. Contempt for the female is absolutely ingrained in the language.

True story: My six year old asked me why Santa says bad words. What bad words, I asked. He replied, 'Ho, Ho, Ho.'
I wish I was making that up, but I'm not.

No hands going up here, but is there anyone in particular at the Borough of Southwark to whom we could write to request their definition of 'forthwith'? Case number?

Bless you, Lydia, but I am afraid writing to Southwark does not appear to yield any results, judging by the number of emails and letters that have gone under the bridge. I appreciate it that you are prepared to do it, though! I know you are serious.

Nick, that is the best Christmas joke ever, unfortunately.

Humph. Are you taking my name in vain?