A VISIT TO THE CUTTY SARK by Adèle Geras

It was my friend Sally Prue who  suggested the visit, bought the tickets, fixed the time, looked up the trains etc and was in charge of all the practical arrangements. So a huge thank you is due to her. I wanted to visit the ship because I thought it would be useful for a forthcoming historical novel I intend to write. 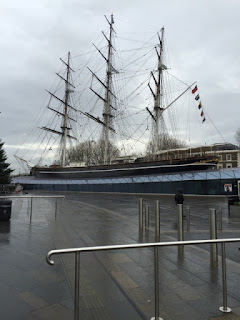 And there she is, looking glorious  as you step out of Cutty Sark station, having travelled on the Docklands Light Railway. But have you ever given any consideration to the ship's name? I must admit to being aware of  it for almost the whole of my life without once asking myself: what does it mean? What's the origin of the words? I'm willing to bet  that 90% of my readers will be just as ignorant.

CUTTY SARK is the name of a garment traditionally given to  young Scottish girls when they were deemed to be grown up...a sort of rite of passage. It means 'short petticoat'  - quite a risqué garment in the 19th century. John Willis, the Scot who built this ship, was a great Robbie Burns fan and the name is taken from Burns's poem Tam O'Shanter.  Tam, riding his horse Maggie, spies on a witches' Sabbath, taking place in a desecrated church. The music is played by the Devil himself.  The witches are all hideous and old except for Nannie, who  is young, ' a winsome wench' and wearing a cutty sark. Tam cries out 'Well done, Cutty Sark!" and the witches see him spying on them and start to chase him. He runs for the nearest bridge, because everyone knows witches can't cross the water, but Nannie, following close on Tam's heels, catches hold of Maggie's tail and tears it off. The ship's figurehead shows Nannie, in her cutty sark, holding poor Maggie's tail aloft. There's a photo further down in which you can see this.


The Cutty Sark was a clipper ship. She sailed the waters between England and China bringing back quantities of tea which would boggle your mind. Tea consumption in the 19th century was astonishing and on the trips back from China the whole hold was packed with crates such as the one below, to provide for the needs of a population which couldn't get enough of it. The very beautiful decoration on  the tea crates was like an early bar code: many of the men unloading the ship  couldn't read,  and the pictures showed them where the tea came from and what sort of tea it was. The crates were mostly broken up after they were unloaded and the lead strips which you can see in the photographed were gathered up and sold to the printers in nearby Fleet Street. The Cutty Sark carried tea and later on, wool from Australia and many other cargoes too.   Tea and wool are light cargoes and the ship needed to be ballasted with stones coming back from China. Going out to China via Sydney, coal was often packed into the hold but in her time, Cutty Sark also carried (on the way out to China and I am quoting from the excellent guide book I bought) "baking powder, cocoa, currants, fruits, liquorice, marmalade, sugar, tobacco, brandy, sherry, wine.......oils and paints, galvanised iron,....spades, nails, bolts, paper, books, machinery, engine springs....boots and shoes, candles and matches." You get the idea...I've left out more than I've copied. 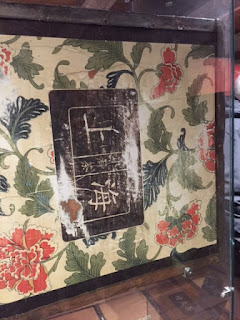 Anyone can Google the Cutty Sark and learn all the facts and figures: how speedy she was, (there were Clipper Races to see how quickly the tea could arrive in London. Higher prices were paid for the cargo carried by the winner of these races. The English liked their tea as fresh as possible), how many voyages she made, what happened to her during the fire of 2007 and how she's been restored. What you can't get, either from the website nor from this account, is a sense of how uplifting and wonderful it is to visit her in real life, so to speak. It's the best tourist experience I've had in London because since the restoration of the ship after the fire, real imagination has been used everywhere to make sure that a) it's a physical pleasure to be walking the decks of such a beautiful craft b) it's an education. Exhibits like the collection of figureheads shown below, (with the white figurehead of the Cutty Sark right in the middle of the display) together with various interactive displays both on film and via recordings dotted about the deck that you can listen to, ensure that all the facts and figures are there ready to be  acquired. The café  is called The Even Keel and is situated directly under the copper- clad hull of the ship, which is suspended in the air over the space where you're having your coffee and cake. (An aside: the Ladies' loo is the cleanest  and shiniest I have ever seen anywhere, even in Germany and Switzerland,  and something for London to be proud of!) 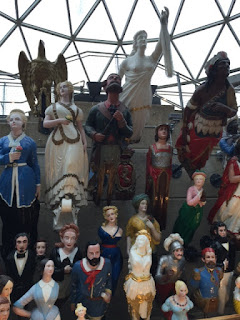 A crew of about 25 men sailed the Cutty Sark across the world's oceans. As you can see from the photos below,  the conditions were, for the time and the conditions, rather good. In all her years at sea, with almost 600 men having sailed on her through every kind of weather, only five men were lost overboard. That's quite a record. The bunks are narrow but I've seen  worse quarters in modern prisons. There was even a student residence I once stayed in which was not as pleasant as these little rooms. The bunks were shared, because as one watch went on duty, the other watch went to sleep. This meant that in cold weather, the bed was warm when you got into it. 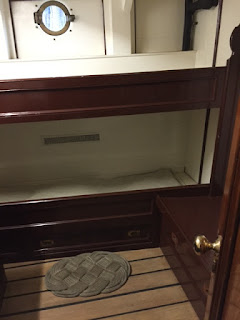 This is the galley. Again, I've seen a lot worse. It's easy to imagine this space  being much messier and dirtier when in use,  but still, the china is of good  quality, and the fixtures and fittings are plain and solid and well-made. This, with the smoothness of the decks, (again, restored to the way they must have been when the ship was first built) gives an impression of neatness and prosperity which pervades the Cutty Sark. 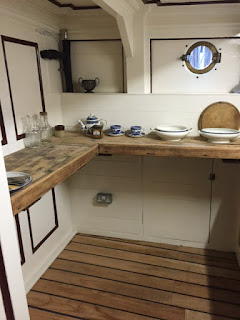 It occurred to me while I was walking round the ship that even though it was easy to imagine the terribly hard work undertaken by the men who sailed her; icy conditions, storms at sea, icebergs and typhoons, and so forth, there was no lingering taint of suffering such as you'd find on  a slave ship, say, or a  ship that was used to transport prisoners to the penal colonies in Australia and Tasmania. The atmosphere is comfortable. It reminds you of trade properly conducted: commerce expanding, the world shrinking; the business of the globe being transacted by this vessel, and other vessels, and I like to imagine these tea clippers riding  the waves in every kind of weather and looking more beautiful than any ship before or since, with those magnificent sails set. The Cutty Sark had a mast vane, shown below, which was once gilded so that it caught the sun as the ship sailed into harbour. This was lost for many years and only surfaced in an auction in 1960, without its gold but still splendid. 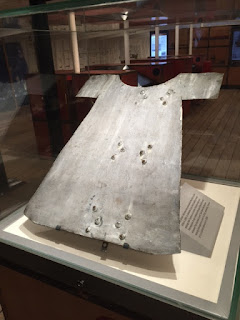 Below is the view  from the top deck looking across the river. 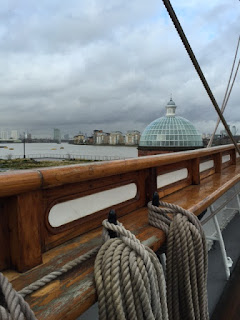 And this, below,  is the rigging. If you look carefully, you can see a man sitting on one of the masts. Rather him than me, I say, but even so, it's a sight that lifts the heart. Anyone who wants to enchant  a child, or a class of children and who can get to London would be well-advised to book a ticket to the Cutty Sark.  I will go back... 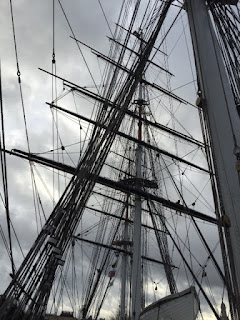 Lovely! I've never been either, but I will now. I love the story about the name - if I'd had to guess where it came from, I wouldn't have got anywhere close!

It sounds like a definite, next time I'm in London - thanks, Adele!

Isn't it odd how beautiful machinery can make one feel emotional? There's the emotion of the lives lived in and around it, of course, but there's something about the ship itself ... or am I just bonkers?

Ha! I'm going to boast and say I've known the meaning of 'Cutty Sark' for decades - it comes from a misspent youth listening to Border Ballads and other rhymes of North Briton.

I really enjoyed this post - and your enjoyment, Adele, comes through clearly. Another terrific ship museum - where the beautiful machinery again makes you very emotional, Pippa - is the Great Britain museum in Bristol. I've been there twice and would go again in a minute. I can't imagine it being better done.

I'd go to see the Cutty Sark if it didn't mean going to the Great Wen!

I am sorry to say, but I think the origin of the name, Cutty Sark, is best left buried. The story is so silly it almost ruins the romanticism of the name of the boat and the whiskey!

thank you all for your comments! I TOTALLY FORGOT it was my day yesterday...wrote this ages ago! And yes, the Museum in Bristol sounds good. I love ships.

An enjoyable "re-visit", Adele, and a reminder for when I'm next down in the Great Wen.