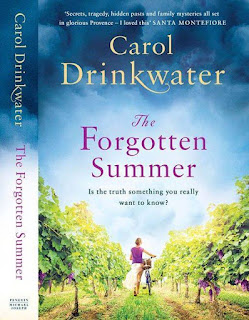 Any author reading this blog who is two weeks away from publication will know the nail-biting angst I am suffering. Those days leading up to the release of a new work... So, I won’t describe any of the emotions that are soaring through my body right now. We all know them.

Instead, I thought I’d write about the seed for the novel because, although it is essentially a modern novel set in Provence, its roots lie in 1962, during the last months of the Algerian War of Independence. I wrote briefly about Algeria in a HG blog titled A Potted History of French Algeria. Here is the link if you would like to read it:

the title of my novel was The Lost Domain so please don't be confused.

My editor at MJ Penguin who bought the novel in an auction, along with the unfinished one I am at work on now, did not think the title worked and after much toing and froing and probably fifty alternative suggestions from me, we settled on The Forgotten Summer. The general opinion is that it is more evocative. I agree.
Anyone else out there had their title changed? I am funny about titles, I need one right at the beginning of the writing process even if I know it will not be the one that sits on the jacket when publication day comes around.
The Lost Domain, for me, conjured up the vineyard estate in Algeria from which the defeated French colonial family who are at the centre of my story fled. I wrote those chapters first: the scenes set in Algeria during the dying throes of a very bloody and ugly war. Once the book had been completed those scenes became the novel’s Epilogue not its opening and I certainly think that material works better where it sits now. And The Forgotten Summer is the better title. 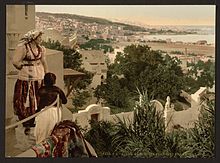 Where do stories come from? We are always being asked this question, aren’t we? In this instance, I had no idea. And then I began to recall that during my travels in Algeria for The Olive Tree six or seven years ago, I came across many abandoned French-owned estates. They looked so desolate, so ghost-like. Not all have been left to the growth of nature. Some have been allocated to Algerians who usually work them as cooperatives. The Algerians, whether Arabs or Berbers are all Muslims – the Jewish population has fled – and they do not drink alcohol so they have little interest in the cultivation of grapes. When the French ruled Algeria, the greater portion of the grape harvests were shipped back to France to press for wine. I am not in favour of colonisation and the Algerians were, on the whole, not treated well by the French. Still, the infrastructure built by the French in Algeria, usually with an Algerian labour force, was very efficient and many of the now dilapidated buildings were magnificent. It seemed such a waste, and yet I understand why the Algerians have rejected the European urban spacial structures. 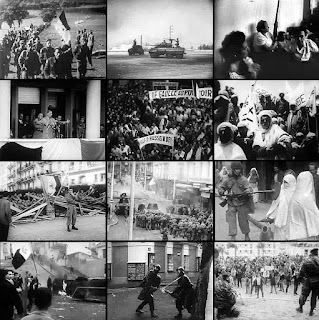 I found this collage of pictures of the end of Algerian War on the internet.
It is in the public domain.

Even so... those sprawling abandoned estates haunted me. The images stayed with me and, without my realising it, the seed for The Forgotten Summer was sown.
When the war ended, after an eight-year struggle for independence, De Gaulle returned Algeria to the Algerians. This left almost one million French citizens, many of whom had never set foot on mainland French soil, disenfranchised, homeless. They fled the land of their birth and secured themselves passage to France.
What happened to all those French citizens who fled Algeria and took up residence in France, I asked myself. How did it feel after being the ruling power and educated force in a colony to find oneself a refugee?  How did it feel to be rejected by one's own people because the pieds-noirs (black feet, French citizens born on African soil) were not welcomed in France. On the country, they were hated by many.

That history, the loss of Algeria after 132 years of military presence and colonial rule, is at the silent heart of The Forgotten Summer. A past that haunts, that does not go away. And one that, until recently, was rarely spoken about in France. I began to imagine a family, the Cambons, who, over three generations, had made a fortune in the colony as wine-producers and were now forced to flee their sprawling estate overlooking the Mediterranean, to go they knew not where. And then I asked myself: what happens if, in the panic and chaos, not every member of the family manages to escape...? 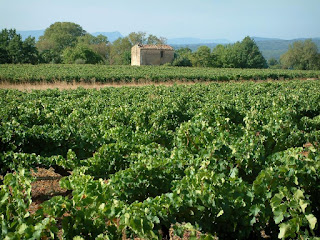 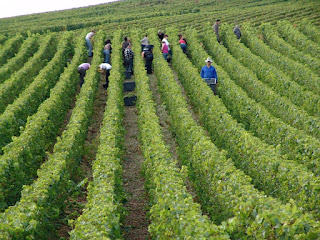 The Forgotten Summer is the story of two women and a boy. One, Clarisse Cambon, a pied-noir, who escapes to France in 1962 as the war is ending, with her small son, Luc, and her sister-in-law. They have lost everything in Algeria and are obliged to begin again in the mother country where they find themselves not welcome… They have been very wealthy and still have reserve funds which they use to purchase a rundown vineyard in the south of France.
And then one summer an English girl, Jane, seven years old, is pitched into their lives and befriends the boy, Luc….

Here are extracts from a few early reviews sent to me from Penguin yesterday:
"A beautiful, atmospheric story of loss, family drama and mystery."


"Intriguing, atmospheric novel of family secrets set in Provence."
"Carol's love of Provence shines through in the evocative descriptions of the Provencal countryside and way of life. The characters are well-drawn and the story is interesting, with a few unexpected twists."

I hope you enjoy it. THE FORGOTTEN SUMMER. If you would like to read the first chapter, here it is:

Email ThisBlogThis!Share to TwitterShare to FacebookShare to Pinterest
Labels: South of France Vineyards, The Algerian War of Independence, The Forgotten Summer, The Olive Tree

Looking forward to this!

Good luck with the book Carol and like Sue, I look forward to reading it.I love different times and places that are very different from the view outside my own door. Yes, I've had title changes and discussions down the years. Sometimes what is right for one market isn't for another. I had one novel changed for the US market. UK title was 'Lords of the White Castle'. Only problem was that the US burger chain 'White Castle' and a recent drug scandal connected to some of its employees. So it became 'The Outlaw Knight' in the States.

Oh yes, titles are the hardest part! So looking forward to reading - sure it will fly x

Elizabeth, I love the story of Lords of the White Castle. It makes sense when you look at it from their pov! Thank you lovely girls for your supports Cxx

Carol, thanks for the insight into the background of the book, which I'm looking forward to reading
. Researching history for a novel can be the most pleasurable and also the most painful experience, as most of that hard work must remain invisible. Your tale of title changes, and your comment above, clearly illustrate the difficulty inherent in title-making. The first title, yours, is perfectly descriptive from your pov. The editor's title likely took into account the new meaning of domain, which is all to do w/ the Internet, and nothing to do with the historic meaning in your title. Like you, though, I need a working title other than "Working Title #1, #2, etc" to inspire me along the way.

Sounds truly fascinating and very evocative, and definitely one to look forward to. I must say I like the new title more (and of course I'm keen on summery titles!) Liberty's Fire is the only one of my books so far that's kept the same title from conception to publication, and the one I'm working on at the moment has only the vaguest of titles. All the very best with publication! Not long now...

Sounds marvellous, though I can't bear to sneak a read of the first chapter now - I would like it in one wallow this summer, hopefully when my own next ms has gone in! Congratulations Carol!

What a fascinating subject. I knew almost nothing about all this.

I love The Lost Domain, but it immediately made me think of Le Grand Meaulnes, so The Forgotten Summer seems a better choice.

Congratulations, and all good wishes for publication day and beyond.