Circling the Square by Laurie Graham 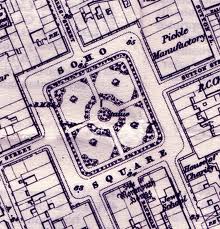 When I began work on A Humble Companion I wasn’t sure where I would place Nellie’s childhood home.  Nellie’s story is fiction built on a foundation of real events. When the Prince Regent was still the Prince of Wales his steward truly was a man called Ludwig Weltje  - there’s actually a road in Hammersmith named after him  - and Mr Weltje, or Welche, as it became anglicised, did have a daughter who married a confectioner called Buzzard. But where the Weltje family lived during those years of royal service isn’t recorded, which left it temptingly up to me.
I chose Soho because Mr Weltje was, by all accounts, no dusty old courtier. He was an energetic, cosmopolitan man of business who kept a good table and believed in flushing water closets. What might today be sniffily referred to as nouveau riche. Soho Square seemed to have the right kind of historic vibe for a Dutch/German on the make. Towards the end of the 18th century its residents were a varied bunch: successful tradesmen, third division aristocracy, a few surgeons, lawyers and diplomats, and the kind of hotel where rooms could be rented by the hour.  I felt that Weltje’s merchant heart would have enjoyed living on such a colourful agora.
The look of the little park hasn’t changed so very much since the 1780s. There were iron railings then because it was a private garden, and lime trees and Caius Cibber’s rather sorry statue of King Charles II, displaced for a while by a mock-Tudor tool shed but now reinstated in the park. The surrounding buildings are a different matter.  The square has a typical London history of speculative building, bankrupt developers, Chancery law suits and decay. Very few houses remain that Nellie would have known. Numbers 10 and 15 would have been there, but by her time might have been a bit too rickety for Mr Weltje’s modern taste.
In terms of plot No. 7 would have made sense. In 1794, the year Ludwig Weltje retired to bucolic Hammersmith to try and become an English gentleman, a certain John Trotter took up residence at No. 7. Trotter was an army contractor, with warehouses at numbers 4 to 6, piled up with blankets and harness leather and water canteens. He was a wheeler and dealer, exactly the kind of man Nellie’s father would have cultivated.  The problem with No. 7 is that it no longer stands. A tall office block is in its place, and next to it, where the Soho Academy once stood, is now the Huguenot church. J M W Turner would have been a pupil at the Academy in Nellie’s day, and James Boswell’s sons. I could imagine her leaving off from sorting her mother’s button box and looking out enviously at boys who were granted an education.
But the now modern look of that corner of the square put me off No. 7 and I finally placed the Weltjes  -  and bear in mind this is a novelist’s whimsy not a historian’s scholarship at work  -  at No. 3 which is on the west side of the square, a building later occupied by Kirkman’s, Pianoforte Manufacturers. It would have been the right size of house, well-appointed but not grandiose, with New River water piped in, and stables and a carriage house backing onto Dean Street. Like No. 7 it’s no longer there - the current No.3 was built in the early 1900s, but its position fitted my novelistic purpose.
It provided me with a nostalgic walk for Nellie, a return to her old neighbourhood when John Trotter opened his Soho Bazaar (for the Encouragement of Female and Domestic Industry) in 1816. When peace came, after Waterloo, and the bottom fell out of provisioning the troops, Trotter cleared his warehouse of army goods and rented stalls where war widows and distressed ladies could sell their handicrafts. Ludwig Weltje would have approved. Like Mr Trotter he believed charity weakened the character.
After A Humble Companion had gone to press I discovered I wasn’t the first novelist to tread this ground. Prompted by the Dickens bicentenary to re-read A Tale of Two Cities what did I find at the start of Chapter 6? The Manettes living in ‘a quiet street corner not far from Soho Square.’ It warmed me to think of Charles Dickens, that inveterate trudger of London streets, being there before me.
Posted by Laurie at 02:00

Hi, Laurie, and welcome to the History Girls!

And what a brilliant post.It may be 'novelist's whimsy', but it's fascinating to see the hours of thought, research and imagination that go into just those words '3, Soho Square' which the reader might pass in a second.

What a marvellous map too. Where did you find it?

Second try, Blogger didn't like me the first time. Or liked me too much, having eaten me.

Welcome too to Humble Companion. I've just ordered her, while nursing my hangover from the splendid virtual launch party on your site. I recommend a visit -the hospitality was so bountiful that I imagine there are still good leftovers.

Welcome, Laurie, and you have started your History Girls life with a cracker of a post. Louise is right; no reader except perhaps another writer, usually appreciates the nine-tenths of iceberg underlying the surdace of the book.

Hi Laurie. Welcome to the History Girls and for a most interesting blog.
I recently did some research in London for my next book (1850) and really needed my imagination as so few of the original buildings were there although the street names were the same. Currently I have a huge map of London (1860) spread out on the floor of my office and I walk my characters around with the aid of pointed Postit notes.
Good luck with the book. I look forward to reading it.

Howdy, Laurie and yes: Welcome! I loved this blog and especially the map. Yee-haw!

Hi Laurie, Let me add my welcome, and also say that by bizarre coincidence, I'm also writing about Soho Square in 1794. One of my girls, Alathea Sawneyford, lives there. What a busy place it turns out to be.

Just as well Bloomsbury have moved out!

Welcome, Laurie, and thank you for a wonderful post! I do wish I could have a rummage through Trotter's houses full of army kit, and his very Encouraging Soho Bazaar...

Lovely to see you on here Laurie and hope to meet you in person soon. And a lovely post too, but I am dismayed to hear that Bloomsbury have left Soho Square....Mary, or anyone, do we know why exactly? Money I am guessing but they can't be short, can they? Even in these straitened times? I'm being nosey!

Thanks all HGs for such a warm welcome. I only wish my Nellie might have met Katie's Alathea Sawneyford. Another fabulous name to conjure with.