It's that time of year again, and people are wassailing right, left and centre down here in the west country. So if you want a reminder of how to do it, here's my post from last year. Never mind the wind and the rain - you owe it to your apple trees!

I wasn't particularly aware of the ancient custom of wassailing until recently. Okay, about this time of year you tend to see pictures in the local paper of people with green faces cavorting among apple trees - but hey, I live a mere stone's throw from Glastonbury, where the streets are paved with crystals and littered with spell books, and where every year they have a Goddess Conference at which the place is FILLED with people with green faces - not to mention magical wells, a conflux of ley lines and a 2000 year-old thorn tree. (Well, that was actually vandalised a few years ago, but I hear there are a few cuttings in the care of the fairy kingdom under Wearyall Hill - or possibly at Worthy Farm under the care of Michael Eavis.) So green faces don't raise an eyebrow in these parts.


But, as I've mentioned before in this place, I fairly recently joined a choir. We sing a lot of folk songs, and at this time of year, when Christmas has come and gone, we sing a Wassail Song. I don't know the words off by heart - our leader, Issy, sings it first and we follow her - but they are very similar to these, which I found on the web.

'Old apple tree, we wassail thee and hope that thou shalt bear,
For the Lord doth know where we shall be come apples another year.
For to bloom well and to bear well, so merry let us be,
Let every man take off his hat and shout out to the old apple tree.
Three cheers for the apple tree: hip hip...'

Well, it's a very jolly tune and we like singing it, so we make quite a racket, and I only hope it's loud enough for the apple trees of Cheddar to hear and be enthused. Because the purpose of wassailing is to encourage them, as the song says, 'to bloom well and to bear well'. It's entirely logical. I often talk to plants. I had quite a chat with a Christmas rose the other day, congratulating it on flowering so beautifully when all its predecessors have singularly failed to thrive; and I always apologise to shrubs before I give them a severe pruning, and explain to them that it's for their own good. I find these little courtesies make all the difference, and I'm sure they do to the apple trees as well.

There used to be lots of apple orchards in Cheddar when we first moved here thirty or so years ago. But over the years, most of them have been grubbed up in favour of more houses, and in Somerset generally, the orchards for many years seemed to be dwindling. But since the growth in popularity of cider over the last few years (Thatchers is just down the road), orchards are back in favour, and so is wassailing.

So I thought I'd look into the history of it.


Apparently 'wassail' comes from 'Waes hael!', the Anglo-Saxon greeting and toast which means 'Good Health!' Its purpose is to wake the trees up and scare away any evil spirits, thus ensuring a good harvest of fruit in the autumn. This happens on Twelfth Night - but usually, it being such an old and historical custom, it takes place not on the 6th January, but on the 17th, because this would have been Twelfth Night (or Old Twelvey, as we country folk apparently call it) before the introduction of the new-fangled and totally unnecessary Gregorian calendar in 1582.

The correct procedure is to choose a Wassail King and Queen, who lead a procession of interested parties round the local orchards. At each one, the Queen is lifted up into one of the trees, and she presents it with a piece of toast soaked in the wassail drink, which seems to be a kind of cider punch. This is a gift to the tree spirits. (Here's a recipe - I can't vouch for its authenticity, but it sounds rather nice.)

Then everybody sings the song, after which they shout and bang pots and pans and drums and generally make as much noise as they can to drive the evil spirits out. (Presumably the good spirits put their hands over their ears after eating up their toast.) Then I think they probably finish off the cider punch, and dance round the fire a bit. 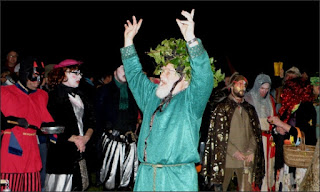 Below is a video from YouTube of a wassail in Gloucestershire. I'd personally like to see a bit more attention to wearing appropriate clothing (see picture above, of a wassail at Brent Knoll, just down the A38 from here) and I'm really not happy about the plastic bags, but it's a good and lusty rendition of the song.

So there you are. I've given you a day's notice, and with a bit of practice you'll soon master the song - so if you have apple trees, prepare to wassail them. Unfortunately, they really don't grow well in our garden...

I like your courteous approach to gardening, Sue! I've just acquired an apple tree, one that's billed as one of the most ancient varieties, grown by monks in the Dark Ages. I doubt this is true, but I'm determined to believe it is. I'm growing it in a large pot, so it probably needs all the help it can get. I shall be out there tomorrow, wassailing.

What great post - really enjoyed this, both as a cider drinker, gardener and apple tree owner :-) My singing voice is more likely to stunt than to encourage it to thrive so I shall go whisper alluringly to it instead ...

I have two apple trees in the garden but had very few apples from them last year. It would seem that some action is needed but think I'll just go out and bang a saucepan at them as I don't think they - or anyone - would enjoy my singing.

Thanks for this reminder, Sue, especially the Old Twelvey date!

There's a fine old story involving wassailing, called The Apple Tree Man, that's long been one of my favourites for winter storytimes. Enjoy your singing!

Hope 2107 brings you all more and better apples for your trees.

Thank you all for your comments!

I must try this if they can be found under the snow (which is melting) but as they tend to over produce anyway I doubt they need my creaky voice singing, but I could always do with some of the punch ;-) maybe even some of the cider from last years crops :-D. I grew up in the west country, near to what is now Sam's Cider, and while we had a small cask in the garage for most of my childhood I didn't like it. now decades later I live in the far highlands of Scotland and my small apple trees in the front give me kilos of crops, and now I make Cider, so maybe I should wassial them :-) doubt my neighbours would join me esp in the current snowy gardens.

Three cheers for apple trees, where'er they be!

And happy wassail to you too!