Not the End of the World - by Lesley Downer

‘My name is Ozymandias, King of Kings …’

In 1931 a young American botanist called Cyrus Longworth Lundell was trekking through the Mexican jungle in search of chicle gum for the Wrigley chewing gum company. He travelled sometimes on foot, sometimes on horseback, depending on the denseness of the trees, led by local guides and followed by a long procession of bearers carrying his luggage and equipment.

Deep in the jungle he arrived at his destination, a site which he had seen first from the air - monumental edifices of stone as high as and steeper than the pyramids of Giza, with stelae placed in front and high up on the walls covered in intricately carved images and symbols. He named it Calakmul which, according to Lundell, means ‘two adjacent mounds’ in the Mayan language..

He reported on it to the archaeologist Sylvanus G. Morley of the Carnegie Institute who set to work clearing and excavating. But from 1938, for unknown reasons, the site was abandoned.

The stelae that had been cleared of jungle were left exposed to the elements. Robbers scaled the crumbling monuments and sliced off whole carved facades, sometimes cutting them into pieces, and somehow manhandled the enormously heavy rocks down the precipitous steps to be sold. Other stelae that had been in excellent condition, protected by their covering of foliage, became weathered and worn down, the original sharp images virtually indecipherable. It was only in 1982 that preservation and restoration began again.

The monuments are a good hour and a half’s drive through dense jungle, followed by fifteen minutes’ walk through the trees. It must have taken days to get here in the 1930s.

Calakmul was one of the largest and most powerful of all the Mayan city states and there are almost 7000 ancient structures. There’s a grand central plaza around which successive rulers built these pyramid-like monuments, ever taller and taller, building around or on top of their predecessors’ monuments, taking them as a foundation. Unlike our castles, these are unfortified. The Mayan rulers built their monuments not to protect themselves but to display their power and splendour.

The tallest is a skyscraper, 45 metres high. Inside, archaeologists found an ornate frieze and the skeleton of a ruler, wearing a jade mask and jewellery, wrapped in textiles and partly preserved jaguar pelts and surrounded by treasures. In others they found beautifully painted murals depicting scenes of everyday life.

In the Mexican heat the jungle grows incredibly fast. In Calakmul it engulfs the ruins. Trees grow out of the stones, roots twine around the rocks and lianas dangle from the branches. Howler monkey crouch overhead, barking ferociously, and sometimes a jaguar emerges from the jungle. It’s all very Ozymandian. ‘Look on my works, ye Mighty, and Despair.’

The Mayan script which covers some of the stelae is made up of ‘glyphs’ - picture writing, more rounded than Egyptian hieroglyphs, almost like little cartoons. Some of the glyphs carry meaning, others sounds, or sometimes both, with one sound represented by different glyphs, a bit like Japanese. It has now nearly all been deciphered and the battles which city states fought with city states and the exploits and histories of the rulers can all be read.

The magnificent civilisation of the Maya began around 2000 BC and was at its pinnacle between 250 and 900 AD. At the time of the Greeks and Romans and throughout our so-called Dark Ages, the Maya were living in city states, building vast monuments and temples, carving intricate friezes, playing ball games and anointing the earth with their own blood. The rulers embodied the gods. They flattened their heads from birth and wore the plumed feathers of the quetzal bird to represent ears of corn - maize, the all-important crop.

The Maya traded widely across Mexico and Central and South America. Christopher Columbus met Mayan merchants and used their excellent navigational maps. All this grew up without any influence from Europe, the Middle East or Asia until the Spanish arrived in 1492.

At Uxmal, 150 kilometres north of Calakmul and the capital of another city state, the buildings are covered in spectacularly beautiful carvings like geometrical patterns. When you look carefully they shape themselves into stylised eyes, noses and mouths. It’s the face of Chaac, the all-important rain god with his hook-like nose, repeated over and over again.

At Uxmal the many different building complexes are clear to see. There’s a great pyramid glorifying the ruler with a door leading to an inner chamber. There are also temples and palaces and a vast administrative court walled by four temples covered in lavish decoration.

On a long low building now called the Governor’s Palace there’s a small platform with a stone throne with two jaguar heads which functioned as an astronomical observatory. From another pyramid 5 kilometres away, in precise alignment with it, Mayan astronomers could observe Venus setting over the north side of the Palace once every 8 years.

Then there’s the ball court, a staple of all these complexes, where players tried to shoot a rubber ball through a hoop high on the wall using only their hip, shoulder or head - hands and feet were not allowed. Depending on the rules of a particular game, the leader of the winning side might have his heart ripped out while the losers became slaves.

These vast stone plazas and edifices were where the rich and powerful lived, played their games and performed their ceremonies. Ordinary folk lived in thatched-roof houses such as one sees all around Mexico to this day, which quickly disappeared.

The apogee was the great monument (‘El Castillo’) at Chichen Itsa. It has exactly 91 steps on each of the four sides, adding up to 364, with the topmost platform making 365. The whole building is one vast stone calendar. During the spring and autumn equinoxes, the shadows form the image of a giant serpent undulating along the side of the north staircase with its head sculpted in stone at the foot.

All these cities and complexes were laid out with mathematical precision, with the buildings aligned such that from certain viewpoints the morning star, for example, could be seen on a certain day of the year. The Maya had three calendars, based on the sun, the moon and the phases of Venus, which intersected like a complex set of cogs at varying intervals, providing very precise information about the movement of the heavens, eclipses, harvests and when to plant. The whole cycle repeated every 5200 years - which is why 2012 was not the end of the world by the Mayan calendar (as was widely touted), but simply the end of a 5200 year cycle and the start of another.

It was also not the end of the world for the Mayas when the Spanish came. Their civilisation had already peaked and faded and they’d already left all their grand monuments. They also didn’t have gold which was the only thing the Spanish were interested in. So they were left in peace for a while though eventually they were enslaved and their entire literature denounced as writings of the devil and - except for three priceless codices - burnt by the Jesuits. 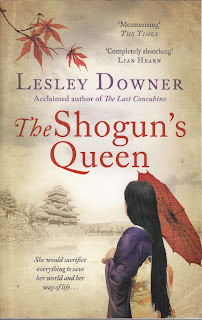 Lesley Downer’s latest novel, The Shogun’s Queen, an epic tale set in nineteenth century Japan, is out now in paperback. For more see www.lesleydowner.com. All photographs apart from Chichen Itsa are by me.