It’s been an exciting couple of months at our house. My husband Ned Palmer who crops up in my History Girls posts from time to time, has got a book deal. God help us, we are now a two author household. He’s a cheesemonger, and for the last few years has run a company providing cheese and cheese talks to all sorts of people from lawyers and lobbying firms to family groups and incidental gatherings of historians. 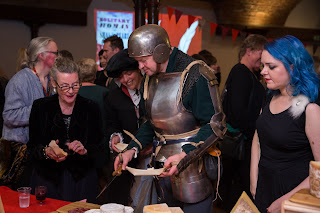 His book is provisionally titled A Cheesemonger’s History of the British Isles. From Roman cheese moulds to factory cheddar of the 20th century; from 18th century squires promoting Stilton, to monasteries coming up with meaty tasting washed rind cheeses; from scientific farming to witchcraft and charms in the dairy, Ned examines history through a cheesy lens. The book is due out from Profile at the end of 2019. 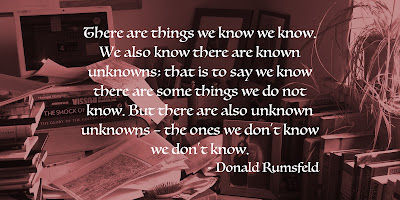 Other than sharing my pride in the other half though, I wanted to talk about how watching him plunging into the research has reminded me of my old friend Donald Rumsfeld. His most famous quote (see above) has echoed in my mind since I started writing historical novels for a living and it's not just me see Antonia Senior's great piece about how the hunt for unknown unknowns can inspire a writer.

But unknown unknowns can be a pain, and I fear by best beloved is feeling that pain. At the moment Ned feels his has to know everything about everything which has happened in the last 2,500 years with the depth and detail of a specialist scholar. This makes me afraid that A Cheesemonger's History will in fact become the Key to All Mythologies with cheese.

I’m in a better position to help than Dorothea Casaubon was though. I know for a fact that if I had a private income, I’d still be researching my second book. Now an extra eight years of research might have made for a slightly better book, but would probably made for a much worse one. We have to decide what is important to our characters, to our story and follow those threads. Of course we need to reserve some time for free and easy wandering through the archives, letting our curiosity lead us into dark corners where inspiring forgotten stories might lurk, but we mustn't become paralysed by a fear we'll be caught out as if preparing for some terrifying exam.

I saw a great ‘Meet the Author’ interview with Conn Iggulden some years ago, and at one point, talking about research Conn confessed he’s always afraid that in his research he’s missed some key fact ‘like everyone in the 15th century had a pet pelican’. (I can’t find the interview online, so forgive the from memory paraphrasing). Anyway, I remember snorting into my coffee as I heard him say that, because it’s such a familiar feeling. You know that you have done your research and it’s unlikely that you’ve missed anything fundamental which your critics will gleefully point out to you, waving their pelican banners over bonfires of your book, but at the same time it’s incredibly difficult not to think that perhaps in the next book, the next scholarly article, the next newspaper or PhD thesis you are going to find something which fundamentally alters your understanding of a period. Learning to write historical fiction is learning to manage that anxiety, work out what is important to your story, and what is important to you as a writer.

I care about getting the history right in my books, and hate it when I get things wrong. I noticed a reference to the Green Man in one of my books the other day - the shame now I know that phrase was only introduced as a descriptive of the foliate heads in churches by Lady Raglan in 1939 . I have to make sure as I disappear into the weeds of my research though that I remember what I’m actually doing for a living. Telling a story. Creating characters. Delivering a satisfying sense of their world. Sometimes I teach classes about writing historical fiction, and the most common question - most often from people who have the hollow eyed look of someone who has spent six months checking for pelicans - is how to manage your research. My answer is always go back to the story. Go back to the motivations and world which your character inhabits, concentrate your research on the world which is closest to them, which matters most to them, on their story.

That said, sometimes I just need to know things. Even if they don’t end up in the novel I need to understand them so I feel I have the authority to describe a place or time in the book. For Paris Winter I had a chart of sunrise and sunset times and daily weather reports. A fellow writer and I were talking about the tide tables she wanted to study for her book.

We all have our things, and often looking for them leads to some nugget of detail, some serendipitous discovery which can expand and enhance your story. We have to make sure there is time in our research to stumble upon things, but we also have to admit upfront what our goals are. For me, that’s tell a satisfying and absorbing story.

So to Ned I’m saying, your readers aren’t coming for a page summarising the current academic debate of invasion v. settlement in the Anglo-Saxon period, they are here to hear you talk about how a cheeseboard can be a lesson in history and culture, rich in anecdote and insight as well as delicious. Stop scanning for pelicans, search out the nugget. And so to lunch. 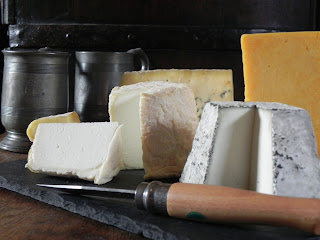 Great post, Imogen! Also thanks for drawing my attention to Antonia's post which I hadn’t seen before - which was, indeed, an unknown unknown. Now known. Very interesting, all. Right. Now for some cheese.

I might not be the writer you were talking to about tide tables but I had to do an almost complete re-write of Black Waters when I discovered I'd transposed high and low tides in Tollesbury part way through. No one else in the world woudl have noticed (probably) but I simply could not have borne it. And there's always that "probably"...

I also think that the book might have been better for the re-write anyway -- made me cut various others extraneous bits that I wasn't actually sure about. And if you're not sure (within the bounds of your book) they shouldn't be taking that page space.