I'm sure we have all been on at least one Literary Pilgrimage.  Writers are fascinated by the lives of other writers, where they lived, where they wrote, the things they used and owned. The same fascination grips readers. Famous writers' homes have become places of pilgrimage. We feel compelled to visit, whether it is Monk's House in Rodmell, Dylan Thomas' Boat House, the Wordsworth home at Dove Cottage, C.S. Lewis' The Kilns or Kipling's Bateman's.

Most particularly, we want to see where the write plied his or her craft.

We shuffle round and past, gazing through glass or from behind a rope, much as a pilgrim might when visiting a holy site. We are often enjoined not to take photographs (but we do anyway) and definitely not to touch anything (if we are allowed to get that close) even though that is exactly what we want to do. The writer's possessions, particularly those associated with the act of writing: pens, desks, letters and manuscripts have become objects of veneration, taking on the religious aura of holy relic. Just as the face of a saint is worn away by countless fingers and lips, we feel the need to touch, as if  holding Virginia Woolf's pen or operating the keys of C.S. Lewis' typewriter, will bring us closer to the hand that created the work we so admire and by some kind of sympathetic magic, bestow on us some of their power.

It is not just the instruments they used that command this fascination. The first time I saw actual written scripts in the British Library I felt a childlike awe. This was the actual writing of the actual person, the way they had written it, with blots, doodles, crossings out. I'm still fascinated by notebooks and manuscripts, especially the scorings out and changes that show the writer's mind at work. And I feel a kinship - even writers of genius collected ideas, jotted them down on whatever came to hand, had to search for words and didn't get it right first time.

The things that a writer owned can, through time, as his or her fame grows, take on the aura of relic, just as the writer becomes mythic, iconic, but those very possessions, those very objects, can also help to restore the writer's humanity. Few writers are as iconic as the Brontës. Even people who have never read any of their books know their myth. Their story is a marketer's gift and so it has proved. Unfortunately, each turn of the myth making mill takes the reader further from the writer and even further from their books. An unusual biography of the Brontës, Deborah Lutz' The Brontë Cabinet, Three Lives in Nine Objects seeks to reverse this process. 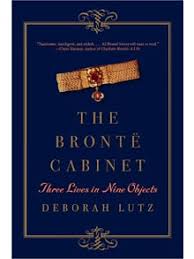 No writers have been more mythologised than the Brontës. From their sudden appearance on the literary scene as Currer, Ellis and Acton Bell, stories have swirled about them. Their use of male pseudonyms began the mystery; their achievement, their singular, unique voices, so unlike anything before them, added to it. The early deaths of Emily and Anne so soon after their success; their brother Branwell's wreck of a life, made their story as poignant and tragic as any work of fiction. Charlotte's death following, so early in her marriage and in her pregnancy, seemed to add a further cruel coda. All of them survived by their father, Patrick. Their home, Howarth Parsonage, soon became a place of pilgrimage, as it is to this day. Among the visitors, those who would themselves become iconic. Sylvia Plath, nose pressed to the glass in the Parsonage Museum, hiking up to Top Withens with Ted Hughes. Their possessions were eagerly collected from the beginning, Patrick cutting up Charlotte's letters for fans pleading for examples of her handwriting. Now, their original manuscripts, letters and possessions are in museums and are considered priceless - relics, indeed.  In her book, Deborah Lutz seeks to return the objects to their original use and place in the lives of their owners and through that to re- discover the Brontës' humanity and put us in fresh touch with them as people.

Through the tiny books they wrote, they come alive as children writing the adventures of Branwell's wooden soldiers on whatever they could find, making books out of wrapping paper, sugar bags - already inventing, making up stories, honing their craft and declaring their ambition to be published writers, even if they had to produce the books themselves.


Charlotte's portable desk, Emily's paint box, a sewing box, a stout walking stick, a dog collar, each of the objects describes something of the different Brontë siblings' lives, bringing them back from the realm of myth, making each one real again and human, occupied and pre-occupied by day to day concerns.


Many of the Brontës' belongings are on display at Brontë Parsonage museum . They re-pay more than a casual glance. These ordinary, everyday objects, often worn and well used, help us see the Brontës as real people who not only wrote but sewed and painted, went for walks, made bread and peeled potatoes. The things they used and owned help to place their writing firmly in lived experience and bring their extraordinary achievement into fresh perspective.
Posted by Celia Rees at 00:30

I had just the same reaction when I went to the British Library and saw the manuscripts, Celia! The book sounds fascinating.