BLUE vs GREEN. Passion and politics in the Roman circus.....


What did Nero and Caligula have in common, besides being murderous megalomaniacs? Both were ardent Greens. In Constantinople some 500 years later, Justinian and his wife Theodora were passionate Blues.

The Blues and Greens were two of the factions in chariot racing, who were supported by the populace in huge numbers. Along with their less celebrated rivals, the Reds and Whites, they provoked violent passions and the occasional riot in a tradition stretching from the late republic until the Twelfth Century AD. This is an extraordinary tale of sporting rivalry.

I first became aware of the Blues and Greens when researching my first, dead-in-a-drawer novel set in 6th century Constantinople. In this era, the violence from the racing factions spilled onto the streets: there were riots and massacres that make our football hooligans seem like benevolent pixies.
Now I am back again, but five centuries earlier. How important were the Blues and Greens in the early Empire - how prevalent, and how destructive? 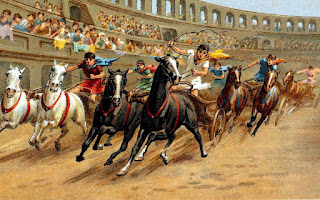 Chariot racing, according to Roman legend, was introduced by Romulus. According to archaeology, it was most likely borrowed Etruria - and the Etruscans borrowed from the Greeks. In the Greek tradition, wealthy men effectively sponsored chariots in the Games, accruing great honour. In Rome, it was fashionable int he early Republic for aristocrats to race their own teams. Historian Elizabeth Rawson argues that at some point after the fifth century BC, the state began to pay horse-breeders to raise horses for the races.

Rawson argues that is it possible that it was about this time that the four factions emerged; effectively four different stables which paid for the chariots, horses and charioteers, perhaps from the ever increasing prize-money.

Charior racing was hugely popular. Ovid, in his Weinstein-ish poetry about how to pick up women, makes it clear that men and women sat together - close packed in narrow rows. The Circus Maximus could hold - it is argued - a staggering 150,000 race fans. Imagine the noise as the Blues passed the meta (the turning post) in the final round, beating the Greens back to a sullen second.  I am reminded of attending a baseball game in America. The distances involved meant there were no rival fans. For someone used to British football and rugby grounds the atmosphere was weirdly leaden. Supporting any sport becomes more interesting when you are vested - somehow, anyhow - in the competitors.

Augustus - who cannily never let his preferences be known  - understood the power of the Circus. He renovated and expanded the Circus, and sat his family on a large collective bench so that they could be seen to be first among equal citizens. As Andrew Feldherr points out, he chose the cliffs overhanging the circus to build his palace; the architectural symbol of the new order.

There is some doubt as to whether all four factions had a long history before Augustus began to incorporate the myths and iconography of the Circus into the elaborate mythical buttressing of his
regime.

Tertullian, writing in the third century AD, says that there were originally only two factions - red and white. This is disputed by modern historians.

Alan Cameron, in his seminal book on this topic, Circus Factions, argues that Tertullian's version is just one tradition, and that all the later versions are ripe with mythology and wish-fulfillment. Cameron argues that the origins of the Blues and Greens go far back in to the Republic - exactly when, we do not know.

Blues and Green became the major colours quickly, dominating the sources. Cameron argues that the precise relationship between the Blues and Greens on the one hand, and Red and White on the other, remains a puzzle. One version of the significance of the colours holds that they represent the four seasons - but as Cameron points out, this notion is part of later mythologising by Roman antiquarians.

There have been various theories propounded as to whether the support for different factions was related to anything specific - class or religion, in particular. In late antiquity it has been surmised that one faction denoted one specific view of the nature of Christ.

I can understand the temptation to ascribe social or religious leanings to one side or another; it seems absurd to hate for no more reason than the colour of a charioteer's tunic. But I have been to football derby matches - a number of them. I have seen little to match the vitriol and hatred between fans of Sheffield Wednesday and Sheffield United. Unlike the other great football rivalries there is little to divide the fans - Liverpool, Glasgow and Manchester have their religious splits; Barcelona its political ones.

But in Sheffield, an owl hates a blade just because he's a blade. Just as a Blue hates a Green just because.


Even as Rome descended into its late Antiquity malaise, chariot racing remained central to the City. In Decline and Fall, Gibbon says of 5th Century Romans that they "still considered the circus as their home, their temple and the seat of the republic."

In Constantinople, meanwhile, the factions became central to the Empire's politics. Who you supported came to matter politically; and the violent uprisings of the factions became a live political issue. Cameron makes strong arguments for the reasons why the rivalry between factions spiralled through the centuries to erupt in riots and murders in the 6th century: He points to the factionalisation of other areas of public spectacle, like the theatre.

But with a novelist's head, and not a historian's, it strikes me that there is another factor at play - all that history! Imagine the weight of it, stretching over an unimaginable 1500 years or so. And this the type of history that clings so tightly to a myth that the two are indistinguishable. The generations of forefathers who were Blue or Green. Who took their Blueness or Greenness from Rome and into the provinces. From Rome to that spit of land at the edge of Asia. Being Blue or Green stops needing a meaning when the weight of history and myth and family presses its colour violently upon your soul.

Antonia Senior
Posted by Unknown at 06:00

I was struck by the contrasts between the land so green and the sea so very blue when I got to visit Italy a few years ago, and I wonder if that had some influence on which team if you where from the land or from the sea edge? I know what you mean, the most vicious fight I ever saw was between two young men who lived a few hundred miles apart but one in Iraq and one in Iran, both at boarding school, when one said something to set the other off!

Hi Ruan,
I've looked for any references to geographic location influencing which colour you chose to support: there seem to have been pronounced blue and green areas in Constantinople, according to Alan Cameron. But the details of who supported which team are too sketchy from the Roman side to be sure. I love the idea though! You are absolutely right about the colours of Italy - hard to imagine sitting here in grey London...