Let us start with Jane Austen.

“While the abilities of the nine-hundredth abridger of the History of England, or of a man who collects and publishes in a volume some dozen lines of Milton, Pope and Prior, with a paper from the Spectator and a chapter from Sterne, are eulogised by a thousand pens, – there seems almost a general wish of decrying the capacity and undervaluing the labour of the novelist, and of slighting the performances which have only genius, wit and taste to recommend them.  'I am no novel reader – I seldom look into novels – Do not imagine that I often read novels – It is really very well for a novel.' Such is the common cant. ‘And what are you reading, Miss – ?’ ‘Oh! It is only a novel,’ replies the young lady, while she lays down her book with affected indifference or momentary shame.

“... Or, in short, only some work in which the greatest powers of the mind are displayed, in which the most thorough knowledge of human nature, the happiest delineation of its varieties, the liveliest effusions of wit and humour, are conveyed to the world in the best-chosen language.”

Of course this is very funny and of course one cheers (though I suppose I may be just as guilty of the modern equivalent: ‘I watch hardly any television – the odd documentary – nothing, really – it's all such rubbish’ – etc). But here, from an improving book called Letters to a Young Lady on a Variety of Useful and Interesting Subjects by the Rev. John Barrett, published 1791, is a passage which casts vivid light on the sort of prejudice Austen must have encountered. After all, she was writing Northanger Abbey in 1798-1799, only a few years after Letters to a Young Lady appeared. And the Reverend Barrett’s awful warnings about novels clearly chimed with the opinions of stuffy people everywhere, for my own copy of his tiny little pocketbook is the tenth impression, dated 1843. 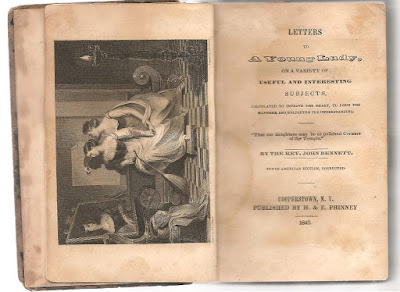 The Reverend Barrett is Firmly Against Novels. And yet funnily enough he uses the fictional device of the epistolary novel to make his points. Using as his example the (presumably fictitious) young Lady Harriet ******, this is what he has to say:


Though Lady Harriet ****** is not yet fourteen years old, she has more than the airs and forwardness of a woman. Who can have taught this girl, that roses are expected to open all at once, and not by degrees?

Who or what indeed? Mr Barrett blames first: boarding schools. Persisting with his sentimental flowery metaphor, he explains that he likes girls to remain children.


Timidity and diffidence are the most attracting qualities of a girl... Boarding schools, it would seem, may be compared to hot-beds. They bring fruits and flowers quickly to their growth. But they have not their proper essence, healthiness, or flavour.

The girlish state is so pleasing, in itself, that we wish not to see it exchanged, before its time, for the caution, the artifices, or the subtle policy of age. It is desirable that a girl should retain, as long as possible, the innocent dress, manners, habits and sentiments of childhood. She will never be more captivating when she is a woman. ...

A forward girl always alarms me. Indelicacy, imprudence and improper connexions start up to my view. I tremble for her friends, and see her history gradually unfolding into indiscretion.

In other words, don’t send your daughter to school, Mrs Worthington. Who knows what mischief a group of twelve and thirteen year-old girls may get up to between them? Why, they may even expand their ideas and vocabularies by reading and exchanging novels or poems! I feel sure Jane Austen would have enjoyed Reverend Barratt’s comical alarm at the notion of being confronted with a well-read, self-possessed teenage girl. He has no idea how to respond, so is reduced to predicting her entire moral and social ruin. The poor man turns again to the dire example of Lady Harriet:


I could discover, from the conversation of Lady Harriet, that she was deeply read in novels and romances. Her expressions were beyond nature, turgid, and overstrained, where she only wished to convey a common idea.

A volume would not be sufficient to expose the dangers of these books. They lead young people into an enchanted country, and open their view to an imaginary world full of inviolable friendships, attachments, ecstacies, accomplishments, prodigies, and such visionary joys, as never will be realised in the coarseness of common life.

What is wrong with the fellow? How can he possibly object to inviolable friendships, and accomplishments, and visionary joys? But here is the old argument, so many times rehearsed and still alive today: that fiction and fancy and poetic invention are nothing but harmful lies which unfit a person for ‘real life’.


The romantic turn they create, indisposes for everything that is rational.


Fortitude they unnerve, and substitute, in its place, a sickly sensibility, that cannot relish common blessings or common things; that is continually wounded with its own fancies. ... Plays, operas, masquerades and all the other fashionable pleasures, have not half so much danger to young people as the reading of these books. With them, the most delicate can entertain herself in private without any censure; and the poison operates more forcibly because unperceived. The most profligate villain, that was bent on the infernal purpose of seducing a woman, could not wish a symptom more favourable to his purpose, than an imagination inflamed with the reading of novels. 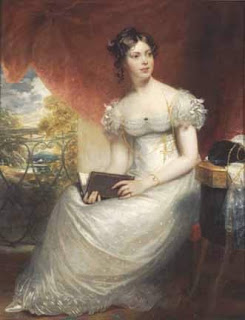 In the face of this kind of disapproval, no wonder Jane Austen’s imaginary young lady hastily hid her book. (I feel sure somehow that the Reverend Barratt and Mr Collins knew each other. They probably went up to Cambridge together.)  Let’s give Austen herself the chance to retort upon Mr Barratt with the last word. If instead of a novel, the young lady had been discovered reading a journal like The Spectator, she suggests –


... how proudly she would have produced it, and told its name; though the chances would be against her being occupied with any part of that voluminous publication of which either the matter or manner would not disgust a young person of taste: the substance of the papers so often consisting in the statement of improbable circumstances, unnatural characters, and topics of conversation ...  and their language, too, frequently so coarse as to give no very favourable idea of the age that could endure it.

I wonder if the good Reverend's parishioners hid when they saw him coming?

As a teacher librarian, I can tell you that, for modern kids at least, the attitude is the opposite. Heaven help the poor kid caught reading non fiction! I can remember when we had a reading period once a week for each English class, and teachers would yell at a boy with a book he might actually enjoy, about cars or planes(boys do tend to prefer non fiction), and ordered to go and get a novel! Right NOW! We did have some non fiction books for entertainment, the "It's True" series and other such, which teachers might - grudgingly - allow the students to read, especially since I'd written one of them, so they couldn't be insulting, could they?

There is an attitude of, "Oh, well, at least they're reading(even if it IS only non fiction...)".

But yes, in Austen's time novels would have been considered frivolous, and I bet the good Reverend expected children to read books of sermons, or cautionary fiction, if fiction at all. I don't imagine he'd be pleased to have caught young Lady Harriet reading a satirical newspaper!