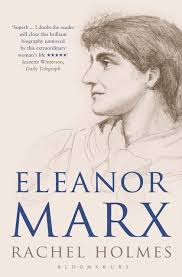 January arrived, bringing time to edge myself back to mid-Victorian London, the time and setting for my long-neglected novel. Looking along the shelves for the right book to nudge my mind along, I spotted one inviting title. The book was ELEANOR MARX, written by RACHEL HOLMES, her biography of Karl Marx’s youngest daughter. Another point in its favour was that I had seen YOUNG MARX at THE BRIDGE theatre, and the play set questions murmuring in my head about the man and his family.


The biography certainly covered the time-span of my “work-in-progress”. Eleanor Marx was born in 1855, but earlier in the 19th Century was there on the pages, looking back at the young lives of both her parents. The book seemed a good “starter” to glance though, so I began on the first chapters . . . and then I kept reading, way past the point of any practical research.


Eleanor Marx, as revealed by Rachel Holmes, is a wonderfully compelling character and, furthermore, the sweep of her life reads like the plot of a classic novel.

Eleanor - or Tussy to rhyme with Pussy - was the daughter who took on Marx’s great legacy and who most inherited his cause and philosophy. Her German parents, Karl Marx and Jenny von Westphalen, had come to London as poor refugees. Marx was in trouble with the authorities in Germany and in France and under suspicion here in England. Times were hard: Marx earned little or nothing from his writing and his family relied on subs from friends, loans from distant relatives and the local pawn-broker to survive life in the London slums. Penniless and hungry, the family flitted between rented rooms, always accompanied by Helen Demuth, their live-in maid-servant. Illness was always a worry and only three of Jenny’s babies survived to full adulthood.

One constant in the household was Marx’s closest friend, Friedrich Engels, the son of an industrialist, whose money kept the small family afloat. Closer than many brothers, these two men - Marx and Engels – debated and created the whole anti-capitalist philosophy and movement. The girl Eleanor must have been there by the fireside, listening and witnessing many of these discussions, having her life shaped by their words.

Eleanor never went to school - unlike her two older sisters who benefited from a burst of prosperity- but she was too curious about everything to stay uneducated. She learned to read and write early, and was an eager student of subjects she valued, taught by various friends and by her father. Surrounded by books, if not much else, Eleanor loved reading Grimm’s folk tales and reciting Shakespeare’s plays and was a keen little letter-writer herself. She grew up speaking German, French and English and, as an adult enjoyed learning languages. As Eleanor moved into her teens, she began helping her adored father with his work, notes, translations and correspondence. By the time she was sixteen, her own life was becoming absorbed in social struggle, and in the dilemma of balance relationships between man and woman equally.
Yet this is only the start of Holmes sweeping biography. Through the pages, we see Eleanor living so closely with all the social struggles of the nineteenth century that she almost seemed a kind of Mother Courage to me. What was particularly valuable about this biography is the very width of its context. 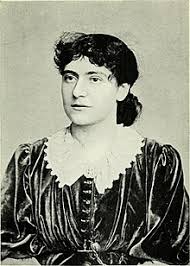 Eleanor was involved with so many of the significant events and movements of the age: the Paris Commune of 1984; the rise of Irish Home Rule & the Fenians; protests and demonstrations against industrialisation, suffrage, the fight for an eight hour day and equal wages, child labour, and education for all.ot limited by "Victorian England": as a refugee and an immigrant, with sisters and relatives living across Europe, she never loses an international perspective, and nor does this book.

Although Eleanor trained as an actor, she had little success but nevertheless those same skills, and the warmth of her personality, made her into a great public communicator. She travelled constantly as a speaker, even to America to speak to the worker’s unions, and was acknowledged almost everywhere for her knowledge and understanding of her father’s arguments, beliefs and philosophy.
Holmes looks into this revolutionary age, revealing some uncomfortable truths such as the lack of empathy between “society suffragettes” and working-class women; the active animosity between the various anarchist and parliamentarian Socialist parties; the English workers general rejection of European Socialist perspective and solidarity, the rise of antisemitism and more. Despite some progress, this was not a trouble-free time, nor was her own personal life free of conflict and deep tragedy.

However, as I read about the different issues she faced, it was impossible not to feel that Eleanor Marx’s life echoed then with many questions and problems that exist - maybe in growing intensity - in our 21st century society, which adds a darker note the journey.

Yet, reading this biography, there is no doubt that Eleanor Marx was remarkable. Through Rachel Holmes enthusiastic writing, she is shown as a truly impressive woman in her own right. And on she goes, through these great flowing pages of history, constantly organising, writing; campaigning; addressing conferences and rallies; travelling and serving her father’s cause, as she tries to face the hidden costs in her own life. One can only admire her generous heart and her bold hope for the future. A remarkable book too - and the end of her story had me in tears. 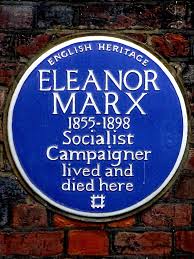 Gosh, I must read it!

It is a wonderful biography and there are aspects of her personal life that I decided not to mention as they would "spoil the story" for anyone reading the book.

I didn't think this would be my kind of book when I started reading your review, but changed my mind by the end, as it seems it gives a perspective of Victorian England that is rarely seen. I shall keep a look out for it.

Great review, Penny.
I don't know much about Eleanor Marx - something I should remedy - but have the impression that she married an odd sort of man, one who was both compassionate socialist and campaigner, and, privately, a rat.

Another similarity that struck me between now and then is that E M was not formally educated but seems to have been better educated than most who were, including those who went to places like Eton.