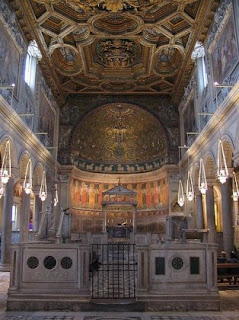 As a sixteen-year-old I fell in love with Rome on a day trip. Six years later I went to live there and now I can see that my fascination with the city - and with history itself - was triggered by my excitement that Rome is a palimpsest; our moment in time balances precariously on top of other centuries which are actually visible. Nowhere is this more true than in San Clemente, a 12th-century church built on top of a 4th-century church built on top a late 2nd century pagan temple. The wonderful thing is that you can explore all these different levels.

The church is on a shabby street that winds between the Colosseum and the church of S. Giovanni in Laterano, which is the real cathedral in Rome (not St Peter’s in the Vatican) and was the first church to be built there, by Constantine the Great. By then, of course, Rome was already an ancient city. Saint Clement, who was supposedly the third pope or successor to St Peter, was martyred under the emperor Trajan. He was exiled to Crimea and forced to work the mines,but since he persisted in his missionary activity Roman soldiers bound him to an anchor and threw him into the Black Sea. His body was recovered at the bottom of the sea when the waters miraculously receded. Later, his remains were later brought to Rome and buried under the main altar of this church.

You enter the upper church, or second basilica, of San Clemente from the world of cars and cappuccinos, through a small cloister and immediately feel a dizzying mix of timelessness and historical curiosity. After the pomposity of Baroque architecture this church is moving in its simplicity. There is a swirling marble pavement,

an ornate marble choir and frescoes of the Life of St. Catherine by Masolino and his young disciple, Masaccio. A 12th-century mosaic fills the apse with a Triumph of the Cross, showing a crucified Christ with the Tree of Life growing in twisting vine tendrils all around. Then a lift takes you down to ancient Rome. You are in another, lower church that is known to have existed in 392, when St. Jerome wrote about it. There are early Medieval wall paintings and frescoes of the Life of St. Clement and the Story of St. Alexis. 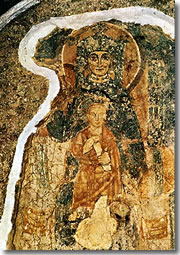 This 6th century fresco in the Lower Church shows either a Madonna and Child or the Empress Theodora. It’s very dark and if, like me, your night vision is weak this adds to the mystery of the experience.

Then you descend another flight of stairs to, roughly, ancient Roman street level and find yourself in a Mithraic temple.The altars of both later churches are placed directly above the altar to Mithras. When you peer through the grating and you' can see a relief carving of the god sacrificing a bull. 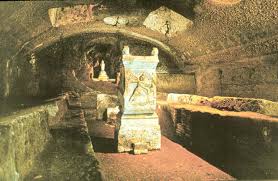 As part of their rituals, Mithraic priests used to sacrifice bulls until the blood flowed into troughs, which followers would then scoop out with their arms to bathe in.

The first building on this site was probably destroyed in the great fire of 64 AD. Titus Flavius Clemens, a wealthy consul and an early Christian, allowed other Christians to worship secretly at his house when their religion was still illegal in Rome, and the basement was used as a temple to Mithras. 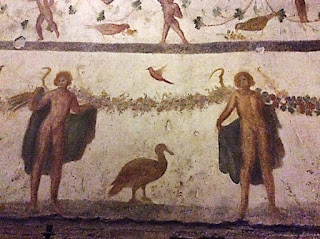 This is a Roman wall painting. As you wander through the dark, brick vaulted rooms of Flavius Clemens' grand palazzo, you can hear the sound of rushing water from ancient pipes and aqueducts behind the walls.

These lower levels were flooded for many centuries and this unique building is, amongst other things, an example of co-operation between the nations of Europe: Irish Dominican monks have been the caretakers of San Clemente since 1667, when England outlawed the Irish Catholic Church and expelled the entire clergy. Pope Urban VIII gave them refuge at San Clemente, where they have been ever since, running a residence for priests studying and teaching in Rome. In 1857 Fr Joseph Mullooly began excavations The Irish Dominicans have collaboratied with Italian archeologists. In one of the chapels there is the tomb of Saint Cyril, who translated the Bible into Slavic language and Christianised the Slavs.


I’ve visited San Clemente many times and it never disappoints me; whether one believes in miracles or not the survival of such a rich and complex building is itself miraculous. On a wall in the atrium is a plaque affixed by Pope Clement XII in 1715: "This ancient church has withstood the ravages of the centuries.” In Rome three more centuries don’t really seem to make a lot of difference.