So you want to be a Roman Emperor?

As this is my first post as a History Girl (and yes I shall be having a badge made with that title, which I shall wear at all times) I thought I’d introduce myself before launching into the subject of my post.


My name is LJ Trafford and I am obsessed with ancient Roman History.
This fixation kicked in whilst studying Shakespeare’s Antony and Cleopatra for my English Literature A Level. Discovering that the arch villain in that play, Octavius Caesar, later became good emperor Augustus I was intrigued. Reading far and beyond my set texts I soon possessed the ability to draw a family tree from memory of the notoriously complicated and inter-marrying Julio Claudian dynasty.
It became clear that the best course for me was to spend three whole years fan-girling over Augustus with the similarly minded. Somehow, despite possessing absolutely no history qualifications, I managed to talk my way onto an Ancient History degree course.

I now write historical fiction and have just finished writing a four book series on the tumultuous Year of the Four Emperors, 69AD. I also have a day job as a Database Analyst.
I thought it might be fun for my first post to combine these two roles and crunch some stats on Roman Emperors .

*Disclaimer*  My Data set runs from Augustus who became Rome's first emperor in 27 BC to Romulus Augustulus the last Western Roman Emperor who was deposed in 476 AD.
There are some gaps in the knowledge of some of the short lived emperors and also some conflicting evidence. My figures are based on what data we do have and my own hunches on conflicting accounts.
*Second Disclaimer*  It's just for fun.


So you want to be a Roman Emperor?


First things first. Being a Roman emperor is extremely dangerous. 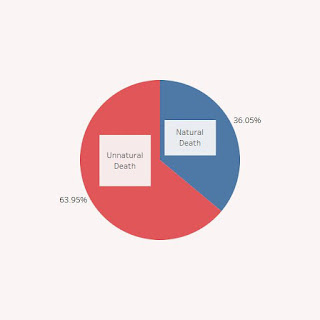 Yes, you have a whopping 63.95% chance of having an unnatural death.
This might rather put you off aiming for the purple. But never fear! I have some top tips that will help aid your likelihood of surviving a tumultuous life at the top.

Tips:
1) Choose the time of your accession carefully. 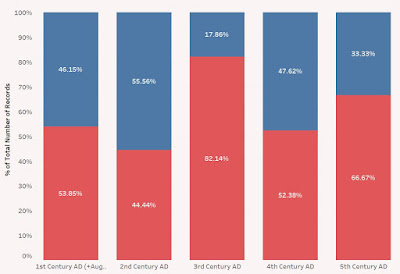 As you can see from the above chart, you have a better chance of a natural death if you start your reign in the 2nd Century AD.
This is the era of Hadrian, Antoninus Pius and Marcus Aurelius, three of Edward Gibbon's 5 Good Emperors.
You will certainly want to avoid the 3rd Century for your Emperorship. This was a period known as the Crisis with a sudden, violent and rapid changeover of emperor. There were 28 emperors in 100 years, meaning an average length of reign of 3.6 years. The 2nd Century by comparison has an average reign of 11 years. Which is ample to make a name for yourself.

2) Are you ready to be emperor? 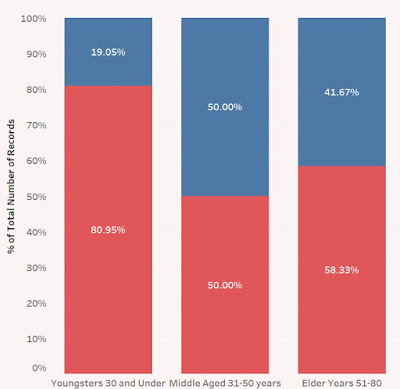 Though youthful exuberance and ambition has its place, it has no place in being a Roman emperor.
Of those who became emperor aged 30 or under a humongous 80% of them met an unnatural death.
Included in this total is Nero who became emperor thanks to his mother's machinations at 17 years old.
Geta, emperor at 20. Stabbed to death in his mother's arms at 22.
And Gordian III who ascended the purple at only 13 and was killed in battle, or assassinated by troops (neither of which is very nice).

Reassuringly, for those of us of a certain age, your chances of an awful death decline sharply once you pass 31. Indeed the best age to ascend to the throne and enjoy a long reign and peaceful death is between 40 and 45.

3) What to look out for.
We've established that you want to begin your reign in the 2nd Century in comfortable middle age but what do you need to look out for to avoid that unnatural death? 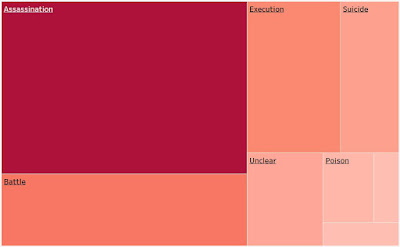 Surprisingly, given the expansionist nature of Rome, those emperors killed in battles were for the most part in civil wars against fellow Romans.
Notable exceptions include Valens who was killed fighting the Goths, Valerian the only Roman emperor to be captured in battle and Julian, who like Valerian, was fighting the Persians.

By far the greatest risk factor is assassination.
A whopping 24 emperors were assassinated, giving you a 1 in 4 chance of ending your reign that way. Even extremely competent emperors such as Aurelian (who regained large tracts of territory during the Crisis era and was named 'Restorer of the World') fell to the assassin's dagger.

So who do you need to be aware of? Who are you most likely to be assassinated by? 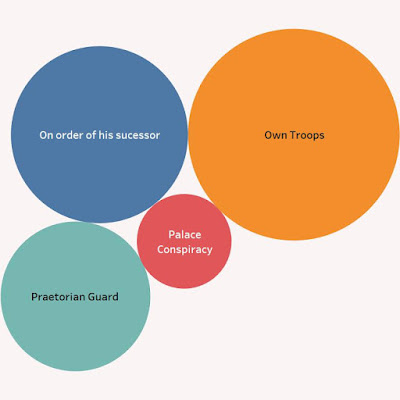 Though an army is a necessity for an emperor you might want to keep them and your own personal bodyguards, the Praetorians, in your favour. Preferably by using coinage. Emperor Galba was deposed and decapitated in the Forum after refusing to pay a bonus to the troops.
Pertinax was ousted because he only paid his Praetorian Guard half of what they were owed.

And keep looking over your shoulder at that 'friend' or relative of yours, they might just be hankering after your throne.

Other notable assassinations include Caligula whose death was organised by a Guard whose high pitched voice he'd made fun of. Caracalla who was stabbed by one of his troops whilst going to the toilet. And Commodus who was strangled in his bath by a wrestler named Narcissus after vomiting up the poison his mistress had given him.


In conclusion having faced up to what is an awfully dangerous job, it is worth remembering that there are some benefits to being a Roman Emperor.
Such as:

Is the data set available anywhere?

I used a product called Tableau to crunch the figures. They have a gallery of vizzes with the data available to download and play with.
For some reason it won't let me publish the link here but try searching for Tableau Public and then within the site for Rulers of Rome. I used the data set from this viz.

Great post! eally enjoyed it - shall be sending it to my brother who has a similar obsession with all things Roman.

An enjoyable post, thanks! As for that emperor captured in battle, I believe his body was stuffed with something disgusting and hung up in a temple. Not a good way to end up! I have a coin from his reign.

Fascinating facts, LJ. Think I'll pass on being an emperor