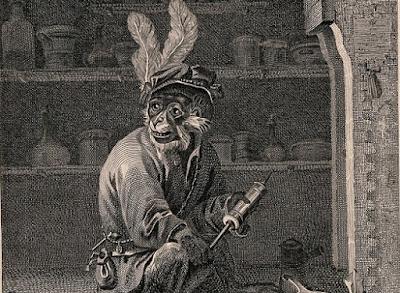 According to my hero, Giuseppe Tassini, the palazzo shown below right once hosted a devil in the form of a monkey-butler. The simian Satan was outed and cast out by a clever Franciscan monk.

The clever monk was Matteo Serafini da Bascio (1495 – 1552). Born in the Papal States, he was ordained in 1520. He espoused the barefoot poverty of his order’s founder, Saint Francis of Assisi, also adopting the saint’s pointed hood and beard. Father Matteo attracted his own followers, who became known as the Capuchin (hooded) order, and were awarded canonical approbation by Pope Clement VII in 1528. But the comfortable desk-life of the order’s first vicar general did not appeal to da Bascio, who preferred more strenuous and austere missionary work. He accompanied the papal troops in Germany in 1546, where he was said to have spurred the soldiers to victory with his inspired preaching. These sermons he continued thereafter in Venice, which is where he came to attend at the Ca’ Soranzo de l’Anzolo just behind the Piazza San Marco.

At that time, the palazzo belonged to Iseppo Pasini, lawyer of the Ducal Curia. This man was well known for his grasping and unscrupulous ways, by which he had earned hugely. Nevertheless, he pretended to great piety. So he invited the celebrated preacher to dinner at his elegant home. Before proceeding to table, Pasini told Father Matteo that he had in his home a most extraordinary and highly skilled monkey. This unusual servant had full command of his domestic matters.

Father Matteo knew immediately, by divine grace, that something was far from right about the monkey – such a beast was surely a manifestation of the devil. He desired to confront it immediately. The monkey must have known a holy man was in the house, for it was discovered hiding under a bed. Father Matteo told it, ‘I command you in the name of God to explain who you are, and for what reason you entered this house.’

The monkey replied, ‘I am the devil. I have brought myself here to take away the soul of this lawyer, which is owed to me on account of many sins.'

Father Matteo continued, ‘And why, therefore, being so hungry for his soul, have you not yet killed him, and brought back with you to hell?’

‘Only because, before going to bed, the lawyer always prays to God and the Virgin. If he had only once omitted his usual prayer, I could have without delay carried him to eternal torment.’

Hearing this, Father Matteo hastened to command the enemy of God to leave the house immediately. The monkey informed him that he had his own instructions: he might not leave this dishonoured house without doing some kind of damage.

‘Very well,’ said Father Matteo. ‘You may do some damage, but only what I shall prescribe you, and no more! You will leave via this wall, and the resulting hole will serve as testimony to what has happened here.’

The devil obeyed. Father Matteo, sitting down dinner with the lawyer, made him review his past life. Finally, picking up a corner of the tablecloth, he twisted it. Miraculously, copious quantities of blood flowed out. ‘This,’ said Father Matteo sternly, ‘is the blood of the poor whom you exsanguinated with so many unjust extortions.’

The lawyer repented and lamented his crimes, and warmly thanked the Capuchin for leading him back to grace. But when he saw the hole left by the devil, he declared that he could not be free of fear if his proud adversary remained free. But Father Matteo was reassuring, commanding him to place the image of an angel in that hole, as any fallen angels (like the devil) would flee from a saintly one. 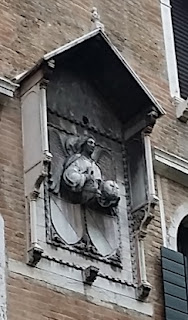 The relief may still be seen today. It consists of a sculpted tabernacle containing two gothic shields above which presides the lushly winged angel. 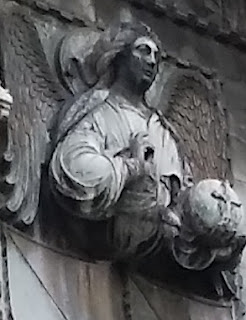 The angel holds a ‘crusader orb’ – a globe with the cross carved upon it – and is blessing it. There are traces of colour, probably not original to the sculpture. Above the angel, there are also the remains of a 14th century fresco of the Madonna and Child with angels. The angel still lends its name to the street and bridge adjacent to it.

Michelle Lovric's website
Image of the devilish monkey above courtesy of Wellcome Images: a  monkey holding a clyster in an apothecary's shop; satirizing physicians who gave enemas to ladies. (How much more devilish does a monkey need to be?) Engraving by F. Basan after D. Teniers the Younger.

What a strange story! Does history relate how many Venetians of the time would have had a monkey in their homes?

Thank you! Not any history I've read. But Venetian art is full of household monkeys in livery. There's a Carpaccio where a monkey in fine robes is used to mock the ignorance of a pagan king, for example.

How very Venetian! Thanks for this, Michelle!