Self-sufficiency then and now… by Carolyn Hughes

I have been musing recently on how, for the past, say, nine centuries or so, until perhaps the early or even middle of the 20th century, the communities in the Meon Valley were mostly self-sufficient, one way or another.


In earlier centuries, people rarely left their village, for almost everything they needed was there, produced by themselves, or local farmers or tradespeople. People’s “needs” of course were, necessarily and aspirationally, much more limited than ours, and, apart from “Shanks’s pony”, most people didn’t have the means to travel far.
There might be a market of some kind in the village, where folk would buy and sell their produce, and itinerant pedlars might bring “extras” that couldn’t be made in the village. In the days when a lot of villagers worked the land in one way or another, they took their grain to the mill to be ground into flour and either made their own bread or bought it from a baker. 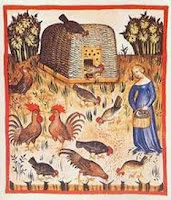 Many grew their own vegetables and perhaps some fruit. If they were wealthy enough, they might have a cow and be able to make cheese. More likely, they might have a pig and produce their own bacon, and even more commonly, have a few hens to produce eggs and eventually a stringy carcass for the pot. If they didn’t, or couldn’t, have their own livestock, others could provide it for a price. People made their own ale or bought it from the village ale-wives. For tasks they couldn’t do themselves, there would be tradespeople who could – smiths, farriers, wheelwrights, carpenters, builders, thatchers and so on.

Very interesting post. I've just reread Flora Thompson's "Larkrise to Candleford" trilogy and "Heatherley", which are fictionalised accounts of her childhood and early adult years in similar small villages and towns. They're very informative about the changes that came about at the end of the 19th and beginning of the 20th centuries.

Another interesting post. I read that Ken Follett did a lot of research on medieval life for his novel'Pillars of the Earth', and found that market charters were granted to towns about 14 miles apart, so the market was viable, but all peasants would have access to a market, assuming they could walk up to seven miles there and back in a day. These sort of facts really bring history to life. I don't think many of us would consider a seven mile walk to go shopping!

Thank you, Helen. I really must read “Larkrise” (goodness know why I haven’t!) - I’m sure I’d find it fascinating too... And thank you, Michelle, for your insight into the likely distance between markets. You are so right that it is these little snippets of information that do bring history, and historical fiction, to life.

I'm sure 17th century women often walked long distances to go to market to sell their stuff. See Alice Clark: 'The Working Life of Seventeenth Century Women.' It's a really interesting and useful read. Flora Thompson was describing a time when women's lives had already contracted, and the rural housewives had less land. She does describe one couple who had more land, and lived the way the countryfolk had previously lived, and I'm pretty sure that woman used to take her eggs, honey, etc, to market. 'Old Sally's' wasn't it? Worth checking that out. As far as breadmaking goes, see DH Lawrence's description of Mrs Morel's bread-making in Sons and Lovers. She made beer at home, too. However, in Lark Rise, the bread was made by the baker, I think. There does seem to have been a great deal of variation.
What I would like to find out is where my great-great grandmother lived in East Meon. I have drawn a complete blank with census figures. I know my great grandmother was married in the amazing church there, because I have a copy of the marriage certificate. One of those picturesque black and white cottages, now worth a bomb, no doubt, was probably the humble dwelling of Ellen Norgate's mother, who had no registered husband, but whose father was described as an ag.lab. (agricultural labourer). No fitted kitchens in those days!